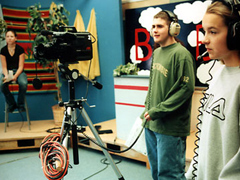 Editor's Note: Since this video was produced in 2000, Benjamin Franklin Middle School principal Tony Bencivenga has retired; he is now a professor of education at William Paterson University. Tony Orsini has been principal for several years, and the school continues to expand its programs in social and emotional learning.

Although students at Benjamin Franklin Middle School routinely place in the 95th percentile and above on standardized exams, Principal Tony Bencivenga does not make test scores the sole measure of school success.

He believes that turning out good kids who are confident, know how to work well together, care for others, treat people with respect, and possess a sense of self-worth is as much a part of his job as pointing them towards the Ivy League.

"I believe that the social-emotional component is clearly the most important of a child's life," says Bencivenga, whose enthusiasm is contagious as he races through the Ridgewood, New Jersey, school corridors calling out greetings and encouragement to teachers and students alike. "If we can create an environment where we feel good and care for each other, everything else falls into place."

Benjamin Franklin Broadcast News is the centerpiece of the school.

An English class discussion on a novel about the Warsaw Ghetto is directed in such a way that it becomes a conversation about what students can do to combat injustice they witness in their own lives. A journal-writing session first includes a discussion on what it must feel like to be a foster child. A lesson aimed specifically at emotional skills has students naming conflicts that create the most stress for them and coming up with ways to abate that stress. And teachers working on an interdisciplinary Web project on genocide meet to come up with ways to engage the students on a personal, emotional level.

Powerful as such lessons are, the less visible aspect of social and emotional learning at Benjamin Franklin is equally important because it subtly infiltrates every aspect of school life:

From the school's television station, BFBN (Benjamin Franklin Broadcast News), a daily student news and public service show produced by eighth graders, is broadcast throughout the Ridgewood community on the local cable station. Bencivenga calls BFBN the centerpiece of the school.

It started out with just a few pieces of equipment and has grown over ten years to include two rooms of sophisticated video and audio gear. The students' public service spots stem from their own research on topics ranging from the dangers of marijuana use to alternatives to animal dissections to sleep deprivation.

Maurice Elias, a Rutgers University psychology professor and creator of a program in social and emotional learning used at Benjamin Franklin, says the television show alone "embodies SEL on multiple levels." The act of producing the show, he adds, is a community-service activity, the work itself requires teamwork, goal setting, planning, listening, and cooperation, "and the content of the programs often addresses positive character development themes." Plus, notes one student producer, the programs have an impact. "Kids listen to kids."

The first class period is devoted to building a feeling of community that sets an encouraging tone for the rest of the school day. Period 1 is used not only to take time to watch the BFBN broadcasts, to attend assemblies and concerts, and listen to special addresses from the principal, it can also be the time when teachers invite the students to share experiences or talk about whatever is on their minds or write in their journals.

Period 1 may be the time when a local police officer comes to the school to talk about what's happening in the community or when counselors visit the classrooms or when students work on the latest food or toy drive. In addition, the teachers, all of whom receive professional development in SEL, may teach a specific lesson designed to build empathy or cooperative learning skills or community service.

Students at Benjamin Franklin are divided into two houses, each with its own vice principal, and then into teams of 100. Each team is grouped with seven faculty members, including the four core teachers for that year, a counselor, a learning specialist for students with special needs, and an administrator. Core academic teachers are in class five periods a day and have two periods in which to plan, confer, or meet with parents.

A slightly longer day with nine periods and fewer teacher responsibilities outside the classroom allow for the planning and meeting time. The school schedule is configured so that students see their team teachers as much as possible, including in the cafeteria, out on the schoolyard, and in period 1. The full adult team meets regularly with individual students and their parents, which, notes Bencivenga, is "a great way of getting a sense of who your kid is," as opposed to just hearing from one teacher.

Students have a month to run 26.2 miles and earn an "I ran a marathon" T-shirt.

A Parent Center on campus reflects the importance placed on having parents as partners in doing what is best for each child, and they are welcome any time. Teachers regularly email parents about important tests or individual achievements or problems, and the parents reply to continue electronic teacher-parent conversations.

Parents are also encouraged to set meeting times during teachers' two free periods, and parent-teacher meetings are thus a regular occurrence, not a once- or twice-a-year special occasion. Many parents set aside time or often videotape the BFBN daily broadcast in order to keep up on school events. Parents also get a taste of the curriculum when they are asked to take the places of their children in the broadcast class and do their own version of the news and public service show.

Teachers discuss an online project about the Holocaust during one of their two confer-and-plan periods.

Athletic programs at Benjamin Franklin feature a no-cut policy that eliminates competitiveness among peers. Any student who wants to play sports organized by the school or the pickup games that sprout up may do so.

"I want children to be a part of anything they want to be, especially at the middle school level," says Bencivenga. "We'll compete with other junior high schools, but the important distinction is, we do not have a Benjamin Franklin team that seeks to find the best kids who can compete with other kids."

March Madness illustrates the sports philosophy: Students can win a T-shirt for running a marathon, which is 26.2 miles long -- but they have a month to do it. Bencivenga says students who never thought of themselves as athletes have a special feeling of pride when they receive their "I completed a marathon" shirt. "That's an example of how I want to build self-esteem and self-worth through a regular education program," he says.

Students discuss and diagram such middle school concerns as backstabbing and homework during period one.

But it doesn't stop there. The school is filled with small and not-so-small actions that add up to a big message. Bencivenga leads meetings with parents, teachers, and students to ask them to define and then commit to SEL.

The administrators use cell phones rather than walkie-talkies to communicate in and around the school because walkie-talkies seem too much like prison paraphernalia. If kids want to come to school early, say at 7 a.m., they are welcome. Most of the time, they study in the cafeteria, throw a few hoops before classes begin, or work on a school project. A student store and a student bank add to the community feeling.

Administrators also teach classes as well as perform their regular administrative duties, so that students can see the principal and vice principals as more than authority figures and as part of the school program. Counselors stand in the hallways during the break between classes to make themselves available and to establish face-to-face contact with students. They also wander through the cafeteria every day.

In every way imaginable, the organization of the school is designed to show that the adults at school care about the students and are there to help or guide them in any way needed. "We're here to raise kids," says Bencivenga. Because test scores are already high, he uses other measures to assess the effects of social and emotional learning: the extent to which students sign up for electives, perform community service, cooperatively learn, and eagerly share their work. On all counts, the program is a success, he says.

The school's "infusion approach" works, says Rutgers's Maurice Elias (who is also an Edutopia.org blogger). "Each child in the course of every day gets touched by several SEL experiences as either a participant or a recipient. And so if you take that and you multiply it by five days a week, 180 school days over a period of years, you'd have a tremendously powerful intervention. And that's what kids are getting."