Perhaps the most important election in setting the course for future education policy is the one in your hometown. You may not have a competitive congressional election in your district, but all 435 members of the House of Representatives are up for reelection this year -- and if Democrats are able to retake control of the House, or the U.S. Senate, there will be some major changes in federal education legislation. 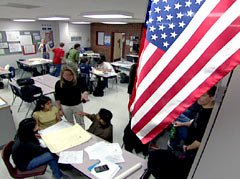 Should Democrats take over, two liberal party leaders -- Representative George Miller, from California, and Massachusetts senator Ted Kennedy -- are in line to assume the chairmanships of the House and Senate education committees respectively. Both were supportive of the No Child Left Behind Act but in subsequent years have emerged as the law's most outspoken critics: Both Miller and Kennedy say the president's sweeping education-reform plan was contingent on adequate funding for various education programs -- monies they say the president has failed to deliver.

Miller has encouraged citizens to sue their states and the federal government for failing to provide adequate facilities and resources for students to receive an education. "You have to continue to litigate," Miller has said. "You can help us realize the goals and live up to the promise of No Child Left Behind."

Meanwhile, fourteen states will consider ballot measures this year that will have an impact on education policy or finance. Though education may not be on the lips of federal candidates this year, voters in all these states will be asked to make some key decisions on issues ranging from immigration to affirmative action to higher taxes. And all these measures will affect state schools.

In Colorado, Amendment 39 would mandate that school districts spend at least two-thirds of their operational budget on classroom instruction; a similar measure is on the ballot in Oklahoma.

Idaho voters will be asked to raise their taxes to pay for schools. Proposition 1 would increase the state sales tax by 1 percent and earmark that money for K-12 education.

In Arizona, immigration is filtering its way into the education debate. Proposition 300 would prohibit adult noncitizens from taking classes offered by the state Department of Education.

In California, education advocates are pushing for more than $10 billion in state bonds to build new schools and modernize existing facilities. The school bonds are part of a comprehensive $40 billion bond package being pushed by Republican governor Arnold Schwarzenegger and Democratic leaders in the state legislature. Many conservative Republicans are apprehensive, at best, about the bond package, and have expressed their concerns to voters.

Polls have shown that many California voters feel the same way about the school-spending plan. The most recent public opinion polls show support for the school bonds hovering at just about the 50 percent mark. (The bonds need only a simple majority to pass.)

Meanwhile, proponents of the bond measure are concerned they may actually suffer as a result of Schwarzenegger's success. The governor holds a wide lead over his Democratic opponent, California state treasurer Phil Angelides, and if the Democrats stay home this year, their absence at the poll booth could doom the bond package.

Voters in California also seem ready to reject a $50 per parcel state property tax. For years, local parcel taxes have been a way for school districts to get around the property tax restrictions of California's Proposition 13. But this year's effort by dot-com millionaire Reed Hastings (CEO of Netflix and a former state Board of Education member) and ultrarich venture capitalist John Doerr to impose a new state tax has been ill fated from the start. The measure is lagging badly in the polls, and its deep-pocketed backers have all but abandoned it, essentially conceding defeat.

In Nebraska, voters will determine the fate of Initiative 423, a version of the Taxpayers' Bill of Rights sponsored by New York millionaire Howard Rich that would create a formula that would allow spending hikes only for inflation and population growth. Should the initiative pass, the state constitution would be amended to limit the growth in state spending. Advocates say it is a necessary control on state spending, but opponents argue that the measure would choke funding to public schools and other state-funded programs.

Oregon voters will face a similar question when they vote on Ballot Measure 48, which would also limit state spending growth.

In Michigan, affirmative action is back on the ballot. Voters will be asked to decide on Proposal 2, the Michigan Civil Rights Initiative. The measure, sponsored by former California Board of Regents member Ward Connerly, is modeled after that state's Proposition 209, which passed in 1996. If adopted, the proposal would prohibit affirmative action programs that consider race, gender, ethnicity, or national origin by state and local government and in public employment and public education.

That state's Proposal 5, if it passes, would give Michigan schools more than $500 million in additional funding, but the state Chamber of Commerce and both the Democratic and Republican candidates for Michigan's governorship oppose the proposal, which would provide minimum funding guarantees for schools. Public-safety groups, fearing it would drain resources for other state-funded programs, are also opposed to the measure.

In Wisconsin, Republican state representative Frank Lasee is pushing a measure to allow teachers to carry guns. "Frank knows it's politically incorrect, but it's something that he wanted to bring up in the discussion on how to keep schools safe," his spokesman told a local newspaper, noting that Thailand and Israel already arm their teachers. So far, Lasee hasn't had many takers on the idea. His own cousin, the president of the state Senate, dismissed the concept as "goofy."

Anthony York is the editor of Capitol Weekly, a newspaper focused on California politics and policy.