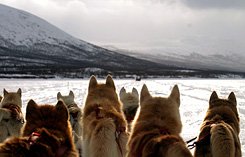 Virtual field trips debuted in the early days of the Internet with an awesome promise: They'd take students to exotic places no school bus could, they'd be a boon to low-income classes without a travel budget, and nobody would get stuck in the car listening to the umpteenth verse of "99 Bottles of Beer on the Wall."

Their execution was often underwhelming, though: Some were more entertainment than education, and others were just lecture outlines gussied up with primitive computer graphics and the occasional hyperlink.

Now, at last, technology is catching up to virtual field trips' possibilities. A new generation of trips is merging highly interactive Web sites with engaging storytelling, vibrant art, and curricula tied to national standards, creating a compelling way to explore the natural world without leaving campus.

Here are our top four picks -- and you can't beat the admission price: free.

"We have a big real-life mystery that we're trying to solve," says Blue Zones founder Dan Buettner: Why do people in some parts of the world live much longer than others?

In a sort of real-time design-your-own adventure, students vote online for nearly every move a team of doctors and demographers makes as it investigates the longest-lived populations on the planet. Past treks took the team to Japan and Costa Rica; next, they'll voyage to an Aegean island where the percentage of people who reach age ninety is four times higher than in the United States.

While the team is on the island, students will choose which elements of the local culture they want the scientists to study. Is the locals' secret to long life their spiritual practices, perhaps, or the herbal teas they drink? Is it their diet, or how far they walk each day? At the end of the trip, students will vote on the eight factors that contribute most to longevity. "We'll harness the wisdom of the crowd," Buettner says.

The team documents each move with videos, photos, and a detailed "Daily Dispatch" for older students, as well as a "Short Report" for younger ones. Teachers can download accompanying national standards-aligned curricula in language arts, math, science, health, and geography.

In addition, Blue Zones offers a four-week fitness challenge that encourages kids to boost their fruit and veggie consumption and exercise levels while cutting back on television and soda. Students can track their progress online via cheerfully illustrated graphs. It works, says Buettner: Last year, participants cut their screen time and upped their veggie intake by 80 percent each, making Blue Zones one of the only virtual field trips that urges kids to actually put down the mouse and go outside.

An exhilarating combination of high tech wizardry and true outdoor adventure, GoNorth! offers students a virtual seat on a real-life around-the-pole journey by dogsled. The trip will last five years and is designed to help kids learn about Arctic ecology, its inhabitants, and its role in the health of the planet. Since 2004 the GoNorth! team of professional explorers and educators has traveled through the U.S. Arctic National Wildlife Refuge, as well as Russia and Scandinavia, beaming back a prodigious cache of video, audio, photo, and text updates. 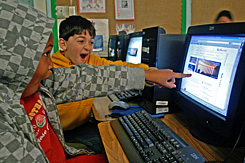 The project's Web site is truly interactive: A weekly Q&A connects classrooms around the world for a live text chat with the team and scientific guest experts like Weather Channel meteorologist Dan Dix, who fielded questions about the climate during the 2008 leg. (Last year, the team was delighted to discover that Australian students were even waking up at 3 A.M. to tune in.) Students can also upload their own movies, artwork, short stories, and other handiwork to the site's "collaboration zones," which encourage kids to create material, not just absorb it. More than 300 pages of standards-based curriculum for grades K-12 are available for teachers to download.

GoNorth! is presented with energy and good humor, and kids love the antics of the sled dogs, who all have their own profile pages and student fan bases. One of the huskies even blogs, providing a dog's-eye view of the trip. Yet students are also asked to ponder some weighty environmental issues, including climate change, oil drilling, and deforestation. The 2009 leg of the journey, across the Greenlandic ice cap, will focus on maritime exploration, and 2010's trek through Canada will investigate pollution.

"I want students to experience the world without having to leave their classroom walls," says team leader Aaron Doering, who researches learning technologies at the University of Minnesota. "They get to be part of our expedition, but they also understand that there is something bigger going on out there that they truly can be part of."

Windows into Wonderland, the National Park Service's series of electronic field trips exploring Yellowstone National Park, is a set of charming Flash animations that intercut cartoons with actual photos of the park.

Students follow along with the animated members of the Yellowstone Ministry of Mysteries as they investigate natural phenomena, including the geysers, hot springs, and animals that make Yellowstone famous. (Just ignore the characters' groan-worthy names, like Maya Crowbes, the microorganism expert.) The most recent -- and most technologically advanced -- field trips are the best; try Getting into Hot Water, about a mysterious problem with the park's rivers, or Where the Bison Roam, about the misadventures of a buffalo named Rosie.

These trips are probably best suited to students working singly or in small groups, so they can participate in the interactive features that crop up from time to time, like short quizzes and games. Hot Water has a clever feature, a pop-up notepad that lets kids jot down their hunches as they try to solve the mystery. Although the "live" component of these field trips -- a Q&A with park experts via online message board -- is active for only two days after each video premieres, the For Teachers link has lesson plans for students in grades 5-8. For example, one lesson explains how to demonstrate the formation of a caldera -- a mega-crater caused by a volcano's collapse -- using a dishwashing tub, a bike pump, and sand.

A standout thanks to its simple beauty and intuitive navigation, this site was launched to accompany the release of the National Geographic Society's IMAX movie Lewis and Clark: Great Journey West, but your class can enjoy it even without the $15 DVD.

Clicking on points along a sepia-toned map lets students trace Lewis and Clark's search for a water route from the Missouri River to the Pacific Coast. Along the way, they’ll learn about the approximately 300 new plant and animal species the explorers encountered and read about their run-ins with grizzly bears, their perilous passage through the Bitterroot Mountains, and, of course, their famous partnership with the Native American Sacagawea.

Each leg of the journey is accompanied by a dozen or so artfully illustrated or photographed images of iconic American West native species like the Montana great horned owl, the ponderosa pine, and the northern bobcat, as well as a few of Lewis and Clark's more obscure discoveries. (Lemon scurfpea, anyone?) Click on the thumbnail images of each to see more information about its habitat and endangered species status. The Kids' Activities link will take you to related classroom activities for grades 3-5 and 6-8 from the National Geographic Xpeditions Web site, most of which have maps and other materials to download for offline use.

Still got the virtual travel bug? The National Museum of Natural History's short but impeccably rendered Virtual Dinosaur Dig will show you how to unearth buried bones. You can peek at some cool three-dimensional images of real fossils afterward by taking the accompanying Virtual Museum Tour.

And back in 2002, the University of Delaware's Mission to the Abyss did for undersea hydrothermal vents what GoNorth! does for the Arctic. Although the site's more interactive features are long discontinued, there's still plenty of freaky deep-sea fun to be had while learning about the creepy creatures of the ocean floor. And check out On-Line Expeditions, a Web page for the university's College of Marine Studies, which features links to Mission to the Abyss and similar adventures. -- KP

Go to "How To: Make the Most of Virtual Field Trips."