1. What do you think of the Digitial Youth Network? What would it take to start a similar program in your community?

2. How is DYN redefining literacy?

3. What do you think of the DYN's special program for girls only? Is this a good idea? Why, or why not?

4. The DYN uses a social network for kids to provide each other with meaningful feedback. What are the benefits of doing this online versus in person?

5. Do you agree that the way people learn is different today than it was in previous generations? Why, or why not? 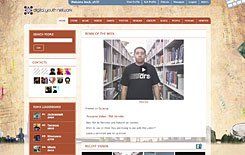 In the common conception, kids plus social networking equals an online popularity contest conducted in grammar-free instant-messaging lingo -- not exactly an educator's dream world. But the Chicago-based Digital Youth Network, a digital-literacy program funded by the John D. and Catherine T. MacArthur Foundation, has tapped into the networking phenomenon to encourage creativity and learning.

The Digital Youth Network runs a private Web site called Remix World, which is modeled on popular online social networks such as Facebook and MySpace. The students and mentors who use it have Web pages that contain pictures, profile information, and links to their friends' pages. They can post digital artwork -- such as videos -- on their pages, comment on friends' pages, and participate in discussions with other users through the Remix World forums.

By providing students a place to share their work and ideas, Remix World allows them to solicit feedback and give constructive criticism. Some students have found the process of sharing on Remix World so compelling that they've gone on to post to public sites, such as YouTube or open social networks.

Twelve-year-old Jalen (also the subject of an Edutopia video profile) is among those who've taken their work to a larger audience on YouTube and elsewhere. "I post online because I don't want it to just be on my computer, where nobody can see it," Jalen says of his work, which includes graphic art, videos (both remixed mash-ups and some using original footage), and computer games. "I get positive and negative feedback, but it helps me get better and better," he says.

"One guy on YouTube told me it was a good video, but the timing was off," he remembers of one project that got mixed feedback. "So I went back and edited it."

When students are motivated to create work that they share online, it ignites an independent learning cycle driven by their ideas and energized by responses from peers.

“Through trial and error, youth add new-media skills to their repertoire, such as how to create a video or game or how to customize their MySpace page," says the 2008 report "Kids' Informal Learning with Digital Media" (also funded by the MacArthur Foundation). The report also says, "Teens then share their creations and receive feedback from others online. By its immediacy and breadth of information, the digital world lowers barriers to self-directed learning."

That's because the Internet makes it easier and less daunting for students to find information or plug into expert communities, according to one of the report's principal investigators, cultural anthropologist Mimi Ito. "They can do a Google search or lurk in a forum and mess around on the Internet without putting themselves out there or having to go to a special location," Ito explains. "They can do it without fear of failure."

Thirteen-year-old Mosea exemplifies this self-directed learning with the evolving digital masterpiece he's created. But he doesn't post that masterpiece on an existing social network; rather, it is a social network itself. Inspired by Remix World, Mosea decided to create his own kid-focused networking site, Realm of New Thought.

"I didn't learn from anywhere particularly," Mosea says about creating his network. "I just experimented."

Experts say that, even more than the digital world in general, collaborative Web 2.0 tools in particular can motivate self-directed learning. "With Web 2.0, there's a strong impetus to make connections," says University of Minnesota researcher Christine Greenhow, who studies how people learn and teach with social networking. "It's not just creating content. It's creating content to share."

And once they share their creations, kids can access one of the richest parts of this learning cycle: the exchange that follows. "While the ability to publish and to share is powerful in and of itself, most of the learning occurs in the connections and conversation that occur after we publish," argues education blogger Will Richardson (a member of The George Lucas Educational Foundation's National Advisory Council).

In this online exchange, students can learn from their peers and simultaneously practice important soft skills -- namely, how to accept feedback and to usefully critique others" work.

"I learn how to take in constructive criticism," says thirteen-year-old Tiranne of her experience with Remix World. She says the collaborative online environment has made this process easier for her. "I'm learning how to post my work, because I never really did that before. I don't like to share personal things, but because everyone else on Remix World is doing it, I can feel comfortable, and I don't have to feel shy."

Still, researcher Christine Greenhow cautions that the virtual world can also present its own barriers to independent learning. "Students can get easily distracted," she observes. "There are so many nonlearning paths, so we need to help them stay focused." That's where a program such as the Digital Youth Network can help direct kids' online time toward learning. By observing how students use Remix World and public social networks, educators can draw valuable lessons about how to exploit social networking for more formal learning.

"Social networking is the platform they're used to," says Digital Youth Network director Akili Lee. "It is a very sophisticated communication platform and, in many ways, it's a collaborative platform. If they're communicating and collaborating in a certain way, why can't we leverage that?"

To this end, the Digital Youth Network remains on the lookout for ways to encourage learning through the activities kids are already engaging in on social-networking sites: YouTube lets viewers rate videos on a scale of one to five stars. Remix World takes this idea a step further: It allows users to rate videos separately for image quality, audio, editing, and content. Rolling a cursor over the stars reveals exactly what each rating means: One star for editing indicates, among other things, that transitions "did not effectively connect the clips," while four stars signals that the transitions "connected all parts of the video seamlessly."

So, as students rate their friends' videos on Remix World, they're also learning how to critique media in an informed way. In this manner, the Digital Youth Network has adopted and adapted a popular social-networking feature to nudge students' activities toward a greater realization of a particular academic goal -- in this case, media literacy.

"We can use social networking in the classroom," affirms student Mosea, who taught a workshop for teachers on using and making social networks. Mosea advises teachers to experiment with using social networks to get to know their students better; to let students submit homework, share projects, and access calendars or a syllabus; and even to reach out to parents. "I think the best use of a social network is as an exoskeleton, or the part of the classroom that exists on the outside but supports the inside," Mosea notes. "The network should be a base of support for whatever the students are learning at school."

Using tools such as the social-network-creation site Ning, teachers can easily develop their own networks, Mosea says. "It is better to create your own," he argues. "If a teacher creates his or her own network, students will post as if their teacher is watching them, and they'll tend to be more safe.

"You can build social networks around the curriculum," Mosea adds, "so you can use them as a teaching resource or another tool." An online social network is another tool -- but it's a tool with an advantage: It wasn't just imposed by teachers; the students have chosen it.

Laila Weir is a contributing editor and writer for Edutopia.