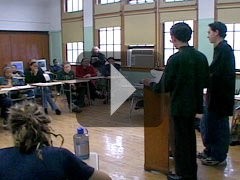 Editor's Note: Since this video was filmed in 2001, the Urban Academy has become a member of the New York Performance Assessment Consortium, acoalition of public schools in New York State that uses a system ofperformance-based assessment in lieu of high-stakes exit exams.Students must complete performance assessments (known as proficiencies) in six areas: English, social studies, science, math, creative arts, and art criticism, as well as in community service, in order to graduate.

To look at Torri Gamble, an articulate, self-possessed 18-year-old, you'd never guess that the young woman struggled through ninth grade.

"I had to get out," Gamble says of her first year in a private New York City high school. "I've always been really opinionated, and I couldn't express myself." Before long, Gamble was cutting class and growing increasingly disillusioned with high school in general -- and academics in particular. And then a friend told her about the Urban Academy, where forming and expressing opinions isn't only encouraged, it's expected. Gamble observed classes, met the staff, and was eventually accepted for admission.

And suddenly school became a place where she could find -- rather than stifle -- her voice.

"I learned to think about different points of view, to see things from different aspects, instead of just one," says Gamble, now a freshman at Howard University.

Before she received her high school diploma, Gamble -- like every other graduating senior at the Urban Academy -- had to complete a series of academic proficiencies in six key academic areas: literature, science, mathematics, social studies, creative arts, and criticism. These intensive, project-oriented assessments are in addition to whatever tests, papers, and projects students complete as part of their regular coursework. Students typically begin work on their proficiencies in their junior year and must have completed at least one proficiency in order to be considered a senior.

Ann Cook, codirector and teacher at the school, which earned a Blue Ribbon School Program honors from the U.S. Department of Education, describes the Urban Academy's proficiencies as a system of assessment that measures, over time, what students know and can do. They are the cumulative representation of such skills as analysis, research, and scientific thinking, all of which the students are expected to develop and employ in each of their courses. For Cook and her colleagues, proficiencies are the antithesis of a standardized high school exit exam.

"Proficiencies require students to demonstrate that they can actually do something," says Cook. "They can write research papers. They can devise and conduct and defend an original science experiment. They can apply mathematical concepts to real situations." These are skills, Cook adds, that will serve students well in college -- and beyond.

Unlike most high schools, the Urban Academy doesn't have any feeder schools; students rarely enter at the beginning of their freshman year. Instead, like Torri Gamble, students transfer after dropping out, failing out, or being kicked out of public and private high schools throughout the city.

Students at Urban Academy benefit from the support, feedback, and expertise of professionals from throughout New York City.

The small school (there are roughly 120 students from all five New York City boroughs) is located on the second floor of the Julia Richman Education Complex, a six-story building transformed in the 1990s from a large, failing public high school into a community of small public schools serving children of all ages -- from infants and toddlers through high school students. There's no middle layer of administration at the Urban Academy. All of the school's 12 faculty members, including the principal, teach courses, and all serve as counselors to their students.

Like the setting itself, classes at the Urban Academy are unlike what you'd find at many schools throughout the country. Here, teachers don't lecture or use textbooks as students' primary source of information on everything from algebraic formulas to the Civil Rights movement. Instead, they facilitate discussion groups, create their own curriculum, and from the first day begin to foster in students a commitment to inquiry and a respect for different opinions.

In a constitutional law class, for example, students break into teams that are charged with the task of arguing a case before the U.S. Supreme Court. Another group of students serves as the distinguished panel of judges, asking questions, poking holes in arguments, and challenging their classmates to use the law, not their own personal opinions, to defend their positions. Joining in the critique -- and the discussion -- is a group of attorneys from a Manhattan law firm. Their presence provides a real-world connection for students and sends a powerful reminder that their opinions, their analysis, and their perspective matters.

The Value of Outside Experts

Outside experts have a part in a great many classes at the Urban Academy, and they participate in evaluating every graduation proficiency. A history or science professor from a nearby college or university may review a final research paper or critique a presentation. A local theater director may offer a personal critique and suggestions to a student writing a play for a creative arts proficiency.

Outside experts participate in every graduation proficiency -- from discussing a work of literature with a student to reviewing a science project or history paper.

Torri Gamble's literature proficiency was based on a reading of Sula, by Toni Morrison. She discussed it with a mentor teacher, identifying themes, asking questions about interesting or difficult passages, and relating it back to other works of literature. Then, when she felt confident in her understanding of the work, she had a conversation with an outside assessor, Sheila Kosoff, who holds a degree in literature and is a Toni Morrison devotee.

Although they'd never met before, Gamble and Kosoff talked for two hours about Sula. They talked about the characters. About the conflicts. About being an African American woman. And both learned a great deal from the experience.

"Sheila knows so much. She taught me so much," says Gamble. "She helped me to see things in a way I hadn't seen them before."

Kosoff, for her part, was equally inspired. She says, "I wish someone had done this for me when I was in high school."

Small Schools with a Big Vision

The Urban Academy is not alone in its commitment to what is termed performance assessment. It's part of a coalition of 32 small public high schools that comprise the New York Performance Standards Consortium. Like Urban, these schools serve diverse students in diverse communities throughout the state. And they share a commitment to providing an individualized approach to teaching, learning, and assessment.

Although their procedures may vary, all consortium schools have adopted a system of assessment aligned to state standards and based on a series of well-defined rubrics, so both the student and the teacher clearly understand the criteria on which work is evaluated. They share a common approach to teaching and learning that is inquiry based and that affords students multiple ways of expressing and exhibiting what they know. And they share a commitment to what Michelle Fine, a professor in the Social/Personality Psychology Program at City University of New York and a member of the Urban Academy's Board of Advisors, calls "a culture of mastery and revision."

Such a format takes a tremendous amount of time on the part of students and their teachers. A single paper, for example, may end up being reviewed by several teachers several times before it is considered complete. But the results speak for themselves: Ninety-one percent of all students at consortium schools are accepted to college, compared to a citywide average of just 62 percent.

Three of Jane Hirschmann's children have graduated from the Urban Academy, and a fourth is a current student there. She's seen firsthand the benefits of the school's individualized approach to learning and assessment. From the written narrative and parent-teacher-student conferences at the end of each term to the care that is taken to meet the needs of students with different learning styles, abilities, and previous educational opportunities, Hirschmann is convinced that the Urban Academy and the other consortium schools serve children well.

"They teach to the individual child," she adds. "They level the playing field for people who have not had equal access to education before."

And these schools provide students like Torri Gamble with a much-needed antidote to the impersonal, one-size-fits-all education that failed them the first time around.