It has taken many years -- far too long -- for me to acknowledge the great and fateful Miss Grimler. (See her photo, right. I'm the fresh-faced kid below.) This remarkable woman -- her first name was Janet, though we would never have dared to utter it -- was the music teacher at my high school in Westfield, New Jersey, back in the 1950s. She was also the conductor of a choir so well regarded that Fred Waring, a famous choral conductor of the time, invited the full ensemble to what amounted to a master class under his direction.

For three years, I was lucky enough to sing in Miss Grimler's choir, as well as in a male group of 13 that was one of its spin-offs. Looking back, I can clearly see that my early-morning rehearsals (Miss Grimler's withering stares at late arrivals pretty much guaranteed prompt attendance), the improvement of my tenor voice, the feeling of being part of a well-trained ensemble, and the joy of our public performances of Bach, Handel, Gershwin, Copland, and other challenging composers represented the high points of my 12 years of public schooling.

Beyond her talents as a musician and her determination not to allow her students to sully the reputations of great composers, perhaps the most remarkable thing about Janet Grimler was that she was able to make choral singing cool. Somehow, she broke down the typical barriers that separated the mini-tribes of jocks and studious, arty kids, of cheerleaders and the girls who stayed in the library after school (though sometimes these diverse types blended in one person). Perhaps attracted to Miss Grimler's discipline and perfectionism, my friends on the football and track teams had no hesitation about trying out for the choir and were no less determined to perform as well onstage as on the field. 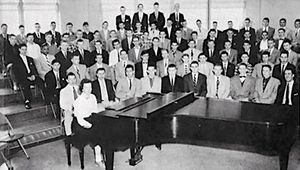 Though both of my parents were accomplished musicians, it was Miss Grimler who really introduced me to the wonder of music, whether as a performer or (in later life) as a rapt listener. I also learned from her that meticulous attention to detail, note for note, word for word, can reap resonant rewards. What she gave me has been an incalculable treasure.

I am happy to report that Westfield still has an active music program as part of its regular curriculum, and, for the sake of the kids there now, I hope the school has a teacher even half as memorable as Janet Grimler. But in this day of straitened budgets and a heavy emphasis on test-intensive subjects such as science and math, schools in less well-to-do towns and city neighborhoods are often not so lucky. When the time comes for costs to be cut, the arts are seen as expendable -- if not frills, then at least not essential to an education that will turn out productive members of America's economic machinery.

Nothing could be more misguided than such bottom-line expedience. Studies suggest that kids who study the arts tend to do better in all their courses. Anyone who has ever practiced an instrument and learned to read music will know that self-discipline, the ability to focus, and increased ease with abstract information are all by-products of that endeavor. Similar positive ripple effects come with studying and creating visual arts (whether digital, photographic, or hands on), reading and writing poetry, or performing drama. Of course, a persuasive case can be made that a generation deprived of a background in the arts will add little to the soul and substance of the society they inhabit as adults. This will be all the more detrimental in an age in which popular culture renders its audiences more passive and less discerning.

In this issue of Edutopia, we look at the often-imperiled state of the arts in education -- at the problems arising as budgets fall and at some of the most interesting and effective solutions teachers and school administrators have found. We intend the issue to be a rallying cry for a field of learning and doing that is both a delightful necessity and an indispensable luxury.

Novelist Zona Gale shared with then fledgling writer William Maxwell her feeling that artists should find "excitement in the presence of life" and bring out "the mysterious beauty of the commonplace." This may seem a less-than-exalted goal for art, but it is in fact the everyday miracle that an education in the arts can accomplish. It is what the Miss Grimlers of the world bring to their students, and we must defend and support it with all our vigor.