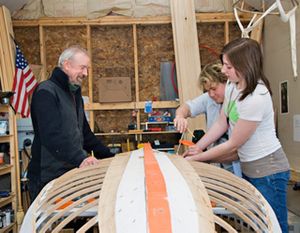 When locals from Maine's North Haven island board the ferry for the 12-mile, hour-long trip to the mainland, they joke about "going to America." This community, about halfway up the coast in Penobscot Bay, has a year-round population of just 350, and may indeed seem isolated from the mainland.

But North Haven residents' self-sufficiency and determination mean they have one thing most Maine islands lack: their own K-12 school. And this scrappy school, the smallest public K-12 campus in the state, has, often out of necessity, developed innovations that can inspire schools of any size, in any location.

In the last century, Maine has gone from having about a hundred islands with schools to just fourteen. Only three serve all grades. North Haven Community School, though, has not only survived but also thrived. It serves as the center of its community and challenges the perceptions about the quality of education -- and opportunities for graduates -- that island schools can deliver. With a flexible curriculum, an experiential, place-based pedagogy at its core, and a commitment to reaching all of the island's sixty-five kids, NHCS gives students real skills and responsibilities grounded in rigorous academics.

Life on North Haven has always involved physical work. Today, work "on island" includes lobstering, carpentry, caretaking for summer residents, and working at one of the two boatyards. Principal Barney Hallowell believes the little school succeeds precisely because it doesn't try to duplicate a large mainland facility. "Teachers understand that teaching and learning is done most effectively in North Haven by doing rather than by sitting and getting because that's the tradition of the community," he says. He points to the hands-on teaching that's part of island maritime life, with children learning at their parents' sides. 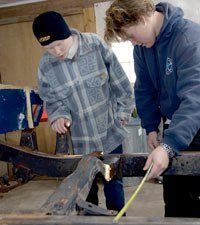 That tradition morphs easily into school life. Students ride in NHCS's electric van (equipped with a student-converted engine) to the nearby garage, where they're making biodiesel and researching hybrid engines for their next vehicle. They're trained in cardiopulmonary resuscitation (in both French and English), and some learn how to use an automatic external defibrillator. They've installed solar panels on the school's roof and tested residents' water for lead. And while studying the Vietnam War, they interviewed people to learn different perspectives on the era.

Though NHCS's learning looks nontraditional, it's grounded in both intellectual rigor and a sense of island identity. "It appears that we break all the rules, which we don't," says Hallowell. "We just connect the teaching we do with the place where we live."

To build a park trail, fifth and sixth graders researched island flora and history, surveyed townspeople, learned to use global-positioning-system (GPS) units and geographic-information-services (GIS) maps to design their trail, studied town government and presented their proposed trail to park commissioners, who approved it.

When a dead white-beaked dolphin washed up on a nearby island, vocational arts teacher Terry Goodhue created a project in which students rearticulated the dolphin's skeleton. They boiled off the skin and fat in honey barrels behind the school, bleached the bones and placed them in carefully labeled boxes, then reassembled the skeleton. Students studied the bones' names and functions, as well as dolphin eating habits and evolution. The skeleton now hangs in the school, where it's still used as a learning tool, as when ninth-grade biology students compared human hands to the dolphin's fins. 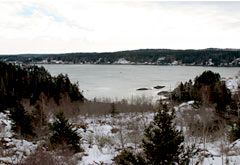 Teachers also look to the island's traditions for inspiration. Under Goodhue's watchful eye, juniors Conor Curtin and Ashley Hodder built a fishing boat of historic North Haven design, using a hand tool called a plane -- and lots of trial and error -- to shape planks to fit the boat's frame. Students use old techniques -- steaming oak frames and cedar garboards -- and develop an understanding of tools and job skills. But Curtin knows how boatbuilding dovetails with academics. "Instead of just using a textbook, we use math in real life," he says. "That's a big part of it -- learning to apply skills we learn in class."

At daily meetings, staff members discuss collaboration and integrating academics with these hands-on projects, but "the first order of business is students," says Hallowell. Parents praise the school's focus and flexibility. "It's adaptive. It works for a really intellectual kind of kid or a hands-on kind of kid," says Adam Campbell, a lobsterman and oyster farmer with four children at the school. "They can focus that education and tailor it to each student, and not use up or hurt anyone else's time."

Teachers learn to build on their students' interests. When eleventh and twelfth graders studied forest ecology, high school science teacher John Dietter integrated a student's love of photography, asking her to find historic North Haven photos, take new pictures from the same location, and grapple with the evident ecological changes. "Rather than starting with the theory in the classroom and reading a text, I had her go to these places and see the change and then try to hook the theory on to it," Dietter says.

Because of the island's isolation, NHCS seeks learning opportunities that broaden students' experiences. English and U.S. history teacher Keith Eaton says the school "readjusted my curriculum" when they hosted Native American leader Barry Dana for workshops on Maine's Penobscot Nation, of which he is governor. Eaton's students debated and wrote about citizenship while working with painter Robert Shetterly and studying his portraits depicting "Americans Who Tell the Truth." Students -- and teachers -- take University of Maine courses through an interactive television system, and a few kids have taken online Advanced Placement courses.

In November, the ferry filled up with students from Bowdoin College, in Brunswick, Maine. Extending an existing connection between the college and NHCS, education professor Doris Santoro teamed with Eaton in a formal academic partnership this year. Students read the same texts (education philosophers such as Paulo Freire were first on the agenda), and NHCS students attended a Bowdoin class called Education and Social Justice as peers.

"That's really powerful, because it demystifies the hallowed institution that is Bowdoin," says Eaton. "They go into this class and they say, 'Hey, I can contend here. I can hold my ground and contribute.'" NHCS students researched Maine nonprofit organizations with partners at Bowdoin's library, analyzed the groups through the lens of their shared readings, and presented their projects when Bowdoin students visited North Haven.

Such trips off island move "school" outside a traditional classroom. Students have visited Europe to apply language skills and to study the Holocaust. A group performed Islands, a student- and community-created musical, in New York City. Each year, the high school takes a fall expedition, like this year's canoe trip on the Penobscot River. Students paddled through landscapes depicted in Henry David Thoreau's writings, studied Native American history, analyzed 300 years of historic, environmental, and social changes, and debated land preservation versus economic development. 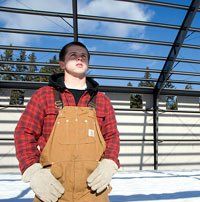 What's most notable at North Haven is that students' work has real-world consequences. The school relies on the student-built electric vehicle for daily transportation. Students plan every part of their expeditions -- from the shopping and packing duties, to designing and navigating hiking and paddling routes using GPS and GIS technology.

They present their findings -- on expeditions, during projects, even after personal trips to interesting places -- to the island's community at large, often using laptops (all secondary school students have one) and LCD projectors, or videos they've shot and edited. "That's a skill that you can measure in a rubric, but it goes far beyond that," says teacher Keith Eaton. "It enters into the realm of character and confidence. They've had to present to members of the community and really focus on 'What was the purpose of our task?'"

Many of these presentations happen in high-stakes contexts. When they didn't meet pupil numbers to receive state funding to build a new school, NHCS raised more than $6 million (mostly from summer residents) and the town committed $1.9 million in taxes for the costs.

Students, such as alumnus Jesse Davisson, had essential roles in the building's design. "For our math class, we made little modular homes out of cardboard and did light studies," he says, while leading a tour of the new building site. Students studied scale and fractions, oriented models according to the construction-site plan, and placed them outside in the middle of the winter for a number of days.

The results horrified them: Except for a few midday hours, shadows darkened the whole front of the school. "The light studies showed it would be a better idea if we flipped it so we had sunlight coming into the classrooms and the main entrance," he says. Davisson, his classmates, and their teacher met with architects in Portland, and the students successfully argued for a reorientation of the school. 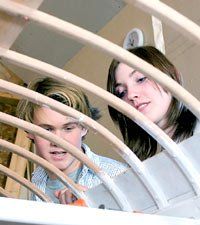 NHCS students get a lot of practice for such pressure-filled situations through the school's own rigorous, public assessments. The island's community comes out to the annual Knowledge Fair, at which each student presents a project and is evaluated by three teachers. And seniors must present portfolios -- including formal assessments in each discipline area, as well as art, music, athletic achievements, and summer activities -- to the school board.

Not everyone on North Haven has supported the new building or the school's unusual instruction. An uproar on island ten years ago got national attention and taught Principal Barney Hallowell that, as he says, you have to "honor people's view that schools have to look a little like school." But a majority of the community eventually rallied around the school, in large part because of its central role. "The school is the heart of North Haven," says Hallowell. "It is the educational heart, the cultural heart, the entertainment heart."

The school's academic results merit this community backing. Though the school rejects teaching to standardized tests, it has been identified as high performing on the Maine Education Assessment the last four years, and its students perform in the top of the state's SAT rankings. It has garnered an accreditation from the elite New England Association of Schools and Colleges, and 80 percent of its graduates pursue higher learning.

Go to "How to Raise the Educational Stakes with Project Learning."