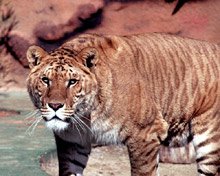 Grace is a half-animal, half-human with amazing powers. She's the creation of the distraught Dr. Sciuridae, a bioengineer who lost his daughter in a terrible accident. During a late-night experiment, he injects his dead daughter's DNA into the egg of an alien. The result is Grace, one of several assassins-with-a-conscience who appear in the popular Web comic El Goonish Shive.

If Grace were real, she'd join a growing group of unusual animals created by combining two different organisms. This hybridization sometimes happens naturally -- when, for instance, amorous horses and donkeys produce mules and hinnies, or Labrador retrievers run off with poodles and give us labradoodles.

But increasing numbers of this mix-and-match menagerie, such as the geep, which is part goat, part sheep, are artificially made. To make a geep, pinprick-size embryos of each species are fused in a laboratory dish. The new embryo is then transferred to a surrogate-mother goat, and months later a geep is born. Injecting quail neurons into the brains of chicken embryos will make a "quicken" (marginally smarter, perhaps, than the barnyard fowl, though why anyone wants a more intelligent chicken is an unresolved question). If biologists mix the sperm and eggs of related species, exotic hybrids can result, including tions and ligers (mixes of tigers and lions).

Geeps, quickens, and even some humans are referred to as chimeras, animals with cells that come from two or more distinct genetic sources. The chimera of Greek fable was a fire-breathing monster with a lion's head, a goat's body, and a serpent's tail. By contrast, cellular chimeras are much tamer. Walking among us are heart patients living well with replacement valves from pigs or cows. Mixtures of different humans -- anyone with an organ transplant, for instance -- exist, too. Many mothers carry small quantities of cells from their children that slip across the placenta during pregnancy. Some bone-marrow-transplant patients pump both their own blood cells and those from the donor.

Our growing knowledge of early cell development and cell biology (combined with microsurgical techniques) has pushed the creation of animal chimeras into uncharted realms. These creatures help scientists unravel the mysteries of early life and human disease, and may serve as factories to grow transplantable human organs. In a pasture in Nevada, a herd of sheep grazes contentedly. But these odd ovines have organs that are 15 percent human. Powerful human stem cells are injected into a sheep fetus while it's still in the womb, and over time the cells become part of the heart, lungs, and pancreas; the hope is that future flocks growing human organs can be used for patients that desperately need them. A similar strategy is employed at the Mayo Clinic in Rochester, Minnesota, where researchers have bred pigs whose blood is 60 percent human.

Using the fetal-transplant method, scientists at the Scripps Institute, in La Jolla, California, produced a mouse with a brain containing 1 percent human cells. Mice with brains made of human cells -- especially those that contain genes for Alzheimer's or Parkinson's disease -- could become powerful tools for testing drugs or studying how human dementias progress, a much better alternative to testing humans.

But such animal chimeras raise ethical questions. The big one concerns consciousness: Would a mouse with 100 percent human brain cells be partly human? Most scientists say it's not likely. Michael Gazzaniga, a neuroscientist who serves on the President's Council on Bioethics, asserts that conscious experience is an unknown quantity. "The mere presence of human neurons does not mean human consciousness is present," he says. "No one has the slightest idea how neuronal circuits do this." Cognitive function depends on brain architecture, not the neurons themselves. To compare, a royal palace and an outhouse might be built with the same type of bricks, but, structurally speaking, they couldn't be more different.

Nevertheless, consider the same question as we move up the evolutionary ladder. What if we used one of the great apes, our closest relations, for the experiment? Could a chimpanzee with a human brain lead to effective treatment of human dementias, or would we learn ways to create a genius by experimenting with an orangutan so equipped? How would we feel if a gorilla could understand the beauty of a Monet painting or weep during Mozart's Requiem?

It should give us paws for thought.

Christopher Thomas Scott teaches stem cell biology and is executive director of Stanford University's Program on Stem Cells in Society. He is the author of Stem Cell Now.