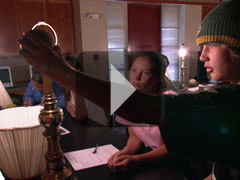 If there's one thing you don't have to convince a kid of, it's the value of movies. A love of the silver screen is practically a birthright in this country, and yet we tend to value movies more for their recreational value than their educational one.

When movies are brought into classrooms, it's usually as a treat for kids who have finished the book the movie is based on, rather than as an exercise in and of itself. Now, however, The Film Foundation, along with celebrated film director Martin Scorsese, aims to help teachers expand their use of film in the classroom with a series of DVDs and curriculum guides called The Story of Movies.

"We live in a very visual society," says Cathy Gourley, the project's curriculum writer. "We are surrounded by visual images, moving images. Teachers recognize that. They know that we live in this kind of a society. The problem becomes, how do you fit film study into a curriculum?"

The Story of Movies is intended to teach kids to think critically about what they see in film, and to consider the filmmaking process and decisions made along the way. It also helps students place films in a historical context, using them as a springboard for conversations about social issues. Finally, says Scorsese, the program should help kids manage and decode the barrage of visual information they absorb in daily life, to "shape their minds to a critical way of looking at these images and what they mean, and how to interpret them."

In 2005, The Story of Movies released its first teacher's packet, which included a DVD of To Kill A Mockingbird along with a teacher's guide, a student activity book, related images and documentaries, and a website with even more resources, including a teacher's lounge, where educators can compare notes. Within a month, the packets had all been given away. Since then, the Film Foundation has launched two more units, based on the 1939 Frank Capra classic Mr. Smith Goes to Washington and the 1951 film by Robert Wise, The Day the Earth Stood Still.

The Story of Movies curriculum is available free to teachers for use in middle school classrooms; the teacher’s guides and other resources can be downloaded from the website, and DVDs are available via online registration at the Film Foundation.