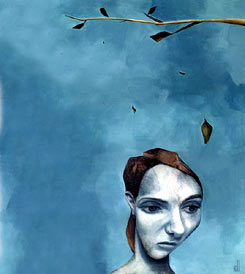 In the hierarchy of tragedy, there can be no argument that among the cruelest of losses is the death of a young person by his or her own hand. Our minds rarely comprehend the inchoate despair that leads to such a grievous act. Where did we fail this child? What could we have done to prevent this unimaginable heartbreak? How could we have missed the signs that the situation was so desperate? Was there anywhere we might have turned for help?

Unfortunately, the issue of suicide is cloaked in such secrecy and shame that most of us are ill prepared to confront the possibility that someone close to us is contemplating taking his or her own life. And when the loved one is a child or adolescent, the disbelief is compounded.

But in this era of stress and uncertainty, when societal and familial pressures can torment even the youngest of us, youth suicide is a subject we simply cannot ignore. Suicide rates among youth have increased threefold in the past half-century, and suicide is the third leading cause of death among young people ages 10-24. To put it another, more shocking, way, according to the American Association of Suicidology, in a typical American high school classroom, an estimated three students attempted suicide in the past year.

In the midst of what can properly be termed an epidemic, a question arises: Who is responsible for stemming this dreadful tide? Is it strictly a family matter, wherein the parents have sole responsibility for their children's mental health, or should schools also play a prominent role in suicide prevention?

Some would make the case that the educational system should stay out of the equation, that simply by putting official voice to the dreaded S word in schools, we are unwittingly injecting a lethal idea into kids' minds. But most educators and mental health practitioners strongly disagree, arguing that public schools are in a unique position to address the problem.

Unfortunately, many school districts don't have the resources to put together comprehensive suicide-prevention programs. And even when they do, teachers are often so overwhelmed with other duties that response training gets short shrift.

"In our district, there are supposed to be crisis teams in every school trained to deal with at-risk kids and how to recognize the warning signs of the kind of depression that leads to suicide," says Rosemary Rubin, a counselor in the Los Angeles Unified School District (LAUSD) and co-chairman of the Los Angeles County Child and Adolescent Suicide Review Committee. "But there are just not enough of us able to go out there to follow up and make sure it's done. And with the No Child Left Behind Act, the push on academics is so intense that it's difficult to get the faculty and staffs to make the necessary presentations."

A few progressive states have addressed the issue by implementing prepackaged prevention programs designed at universities and health centers. In 2001, Maine adopted a program called Lifelines, developed at the St. Clares-Riverside Medical Center, in Denville, New Jersey. A 2002 grant from the U.S. Centers for Disease Control and Prevention (CDC) helped usher the curriculum into twelve public high schools in the state; a dozen others will adopt it this fall.

"To be honest, the schools were not exactly clamoring for this program, and at first we met a lot of resistance," says Sue O'Halloran, a project director for the CDC who works with the Maine Youth Suicide Prevention Program. "Teachers already had so much on their plates, and they saw this as just another big thing they had to do. Then Columbine happened, and that turned the tide. We chose Lifelines because it has clear and simple protocols to guide the school staffs, and because it provides really effective first-response training to deal with troubled kids who might be in danger."

O'Halloran, who in addition to her duties in the Maine schools now works with the Lifelines staff refining the program, terms the course Basic Suicide Prevention 101. First taught to teachers in special training sessions, then disseminated to students in the context of health classes, the subject matter includes such topics as recognizing suicidal behavior, providing immediate assistance to prevent an attempt, and how to obtain further help and counseling.

The presentations are kept short and jargon free and are confined to three topics per session. Dramatized videos such as A Life Saved: The Story of a Suicide Prevention are screened, followed by class discussion, role-playing, and quizzes. Teachers learn how to be gatekeepers to get an at-risk child in the right hands, and students are taught that they are important elements in preventing suicides among their peers.

"One thing we know about kids between the eighth and tenth grades is that they really want to help their friends, and this program shows them how best to do it," says O'Halloran. "Kids are most likely to confide in their peers first when they're in trouble, but in our evaluations we found, to our surprise, that most referrals for help came from teachers. This showed us that something had changed dramatically in the kids' attitudes, and it was their belief that the people in the school system knew what to do, and would in fact help them if they reached out. We were thrilled about that."

But just about everyone agrees that no prevention program works optimally unless schools can get parents involved. This step, however, is often a struggle. "We regularly send our suicide-prevention units out to make presentations to parents, but the fact is that nobody really wants to hear about depression and suicide," says the LAUSD's Rosemary Rubin. "Unfortunately, it often takes a suicide in a particular school before anybody is interested in talking about it."

John Kalafat, a psychologist and Rutgers University professor who designed the Lifelines program, says sometimes a little subterfuge is required to get parents to pay attention to such an unappealing subject. "Often, when I'm addressing parents, I combine the presentation with something they're more interested in, and then give them ten minutes on suicide at the end," says Kalafat.

"What you have to emphasize is that maybe this doesn't concern your kid, but it might concern somebody else's that you know," he adds. "They have to know the scary truth that there are Web sites kids can go to that give specific instruction on how to commit suicide. That's how prevalent this is in youth culture."

But if it's so difficult to involve parents, is it asking too much of the schools to take on this burden?

"In a way, yes," says Kalafat. "Society drops the ball and dumps this stuff on the schools. But school is where the kids are, and if a kid is feeling suicidal, it's a good place to be. If you have a good response-and-prevention program in place, the people around him, his peers and teachers, will know what to do.

Burr Snider is a former contributing writer for Edutopia.

A nonprofit organization dedicated to the understanding and prevention of suicide and consisting of mental health and public health professionals, researchers, survivors of suicide, and crisis centers.

A federally funded hotline providing immediate assistance to individuals in suicide crisis by connecting them to the nearest available suicide-prevention and mental health provider. 1 (800) 273-TALK (8255)