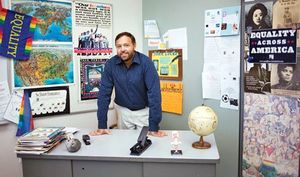 That startling question, asked by a senior in Ernest Van Seasholes' current affairs class, is how Seasholes recalls the beginning of a new era at Newton South High School, in Newton, Massachusetts. "I said, 'Give me a minute,'" Seasholes says, "and I ran upstairs to where Bob Parlin was teaching. 'One of my students wants to know if you're gay. What should I say?'" Parlin said to tell her yes, but also to ask why the question was important to her and to discuss with the class why it might be a challenging issue.

That is how, in the fall of 1991, Bob Parlin came out to the students at Newton South, and in the process, helped spark a dialogue that continues in high schools across America today.

Parlin had disclosed his sexual orientation to colleagues at the suburban Boston high school the previous spring -- fittingly, at a meeting of the Newton South Committee on Human Differences. Homophobia had been on the agenda for discussion, and Parlin arrived a few minutes late, just in time to hear a committee member declare that homosexuality wasn't an issue at Newton South so they might as well move on to the next topic. This wasn't California, after all, and in his 20 years at the school, the committee member had never encountered a single gay student.

Parlin had been teaching history at Newton South for four years, but only a few friends on the faculty knew he was gay. Despite a fear that he might be putting his job on the line, he couldn't let his colleague's remarks pass unchallenged. Parlin recalls what happened next: "I said, 'Let me explain why I think we do have a problem here.'"

He described his experiences growing up gay in Grafton, Massachusetts, in the 1980s. Figuring out he was gay in middle school was a deeply traumatizing experience -- one that drove him far into the closet. "By the time I was in high school, I was deep undercover," he told the committee. "I had a girlfriend. I tried to make sure there were no questions."

From the outside, everything looked perfect; he'd been valedictorian, student body president, and editor of the newspaper. He'd played football, hung out with the popular kids, and brought a date to the prom. Successful as this imposture had been, it had made Parlin feel intensely lonely and isolated. He had to constantly monitor how he talked and acted for fear of giving himself away. Kids were regularly beaten up for being gay, and the word fag was the common parlance for dumb.

He'd hated deceiving people and had felt overwhelmed with shame at being gay. He described what it was like to feel so alone and to feel unsafe in school. With no role models and no one to talk to, he had ended up attempting suicide his first year in college because he could not envision a life in which he could be happy and whole.

It would have helped enormously, he told the Committee on Human Differences, if he'd had even one openly gay teacher in high school to serve as a role model.

Many of his colleagues were moved to tears by the time Parlin finished talking at the meeting, and from then on at Newton South High School, the social and emotional consequences of being gay entered the public consciousness.

Recounting this oft-told story, Bob Parlin expounds on what he took from that afternoon: It's better to act out of hope than fear, and empathy is a powerful tool in dissolving prejudice. He has put that wisdom to work ever since, advocating for the rights of gay students to learn in an atmosphere free of harassment, discrimination, and threats of violence.

Coming out at school galvanized Parlin. Within six months, he started Newton South's Gay-Straight Alliance -- the first such group at a public school. The concept had been pioneered by teacher Kevin Jennings, Parlin's then-partner, at Concord Academy, a private school some 17 miles from Newton. (The two met when they were just out of Harvard.) The goal of these gay-straight alliances is to make school communities feel safe and welcoming to all students, regardless of sexual orientation or gender identity. To support these student groups, Jennings also started a coalition of teachers, the Gay, Lesbian and Straight Education Network, or GLSEN.

Until then, advocates for tolerance had based their appeals on the importance of multiculturalism and appreciation of diversity. Shifting the emphasis to safety was crucial for building broad support, says Parlin. "Even conservative critics find it hard to argue with the proposition that bullying and assaults against gay students need to be stopped," he explains.

Parlin's activism at Newton South put him in the vanguard of what became first a statewide and then a national movement. In 1992, Massachusetts Governor William Weld established a commission on gay and lesbian youth, the first in any state. After uncovering overwhelming evidence that gay students were subject to ostracism and bullying and were at increased risk of suicide, the commission urged that Massachusetts schools develop corrective policies. Among them was a mandate to establish "school-based support groups for gay, lesbian, and heterosexual students" -- a gay-straight alliance.

The state education department was charged with implementing the recommendations under the auspices of the Safe Schools Program for Gay and Lesbian Students. Bob Parlin signed on as a consultant, and for the next two years, he was the Johnny Appleseed of the Safe Schools Program. He and a few colleagues crisscrossed the state, giving weekend workshops for teams of students, teachers, and administrators on ways to address homophobia in school communities.

Parlin has continued to address similar gatherings, both in schools and in the community. He also teaches fellow advocates the framework he helped develop for conducting Safe Schools workshops, called the CEFA model (context, empathy, facts, action). The workshops are designed to help teachers empathize with the educational and emotional needs of gay youth and to understand the problems they face. The teachers hear students telling their own stories and learn strategies for appropriately addressing name-calling and other forms of harassment. They are encouraged to identify actions they can take to make their schools safe and welcoming for gay students and staff.

For example, when witnessing harassment, Parlin instructs teachers to "stop the behavior with a quick remark such as, 'That comment is unacceptable and will not be tolerated.'" But stopping the action is not enough. In a set of instructions Parlin wrote for teachers, he encourages teachers to "ask the harasser to explain what he or she meant by the comment, forcing the student to recognize the hurtful nature of his or her behavior." 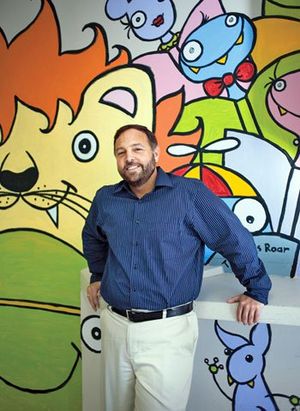 Most important, Parlin believes, is for teachers not to be immobilized by fear of consequences for their actions when calling out harmful behavior. "Making a mistake is far less serious than not acting at all. You can always go back to the student and say or do something else, if, on reflection, you feel you did not respond correctly." He cautions teachers to try not to embarrass the perpetrator: "Humiliating the harasser is rarely an effective strategy."

Nearly two decades on, the movement that started at Kevin Jennings and Bob Parlin's kitchen table has expanded beyond anything they might have imagined. Gay-straight alliances currently exist in more than 3,000 schools nationwide.

Parlin remains in front of a classroom, as passionate about teaching as he was on the day he spoke up at the Committee on Human Differences meeting. Says his friend Jennings, "I was a gay person who was into teaching. Bob was a teacher who happened to be gay." He calls Parlin "the most dedicated and effective teacher I have ever known. He makes every kid feel appreciated because he understands what it's like to feel left out."

On a recent afternoon, Parlin stood before his freshman world-history class ready to hand out graded tests. "Some of you did very well -- others, not so well," he says. Gloating is gently discouraged. He cautions the high performing students to be mindful of their other classmates. One boy, who seems ready to blurt out his good grade, thinks better of it and subsides.

"Kids may forget what you teach them, but they won't forget how you treat them," Parlin says. That mantra of respect defines his role as an educator. Whether he's talking to students, administrators, fellow teachers, or conservative parents concerned about homosexuality in the schools, Parlin allows people "to be in different places in their comfort levels with the subject and lets that be OK," says Kim Westheimer, who teamed up with him in the Safe Schools Program.

Sam Donovan, a 2009 graduate of Newton South, is among the students Parlin has inspired. Donovan, who now attends the New School university, felt at ease enough to come out during his freshman year in high school. "I knew I wasn't going to be judged negatively at school." Bob Parlin's influence was a big part of that, Donovan believes. "He's made sure that there is zero tolerance for homophobia at Newton South." In the beginning, Donovan took this supportive environment for granted and had no interest in the Gay-Straight Alliance. But after getting to know some gay students from less-accepting school communities, he came to understand the significance of these organizations.

"After sophomore year, I was talking to some kids in Colorado who said they couldn't come out at school for fear of getting beaten up. It was so heartbreaking," Donovan says. "That made me realize what the Gay-Straight Alliance was all about. It's meant to change the perspective on homosexuality in the schools and to enable more people to be comfortable with themselves."

Today, Parlin and his partner of 14 years, artist Bren Bataclan, share a floor-through apartment in a blue Queen Anne house in Cambridge, not far from Harvard Square. A framed photo atop a bookcase shows Bob surrounded by a group of cheerful teenagers in a celebratory mood. This is the Newton South Gay-Straight Alliance lofting a banner in a recent Boston gay pride parade. The students -- gay and straight -- are drawn to the organization because of an interest in justice, according to Parlin. "For teenagers, justice is critical, and they want to feel like they're making a difference."

Yet even with all of the group's efforts and Newton South being the poster school for tolerance, homophobia has not been eradicated there. A recent incident -- someone scribbled antigay epithets on blackboards in several classrooms -- demonstrated that there is still work to be done. The school and the Gay-Straight Alliance responded promptly and forcefully. The faculty and students held meetings, and the student newspaper ran stories and editorials calling for the school to "prevent future occurrences of hate." Parlin urged people in the school community to become more supportive of students who struggle with their sexuality.

The challenge Bob Parlin put before the Committee on Human Differences 20 years ago is as relevant as ever. Partly through Parlin's efforts, homophobic behavior is neither overlooked nor minimized at Newton South and at public schools across the country. The school has created a culture of respect for new generations of at-risk students who can feel safe and free to concentrate and succeed at school in a way that previous generations could not.

Ann Banks has written for the New York Times Magazine, the Washington Post, and Vogue and has published seven books for children.