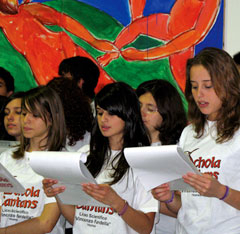 Call it the corridor effect -- that random creative spark struck when two people pass each other in the hall and stop for a minute to talk. That's what happened eight years ago when Maurizio Vento, Latin teacher at the Vincenzo Fardella high school, in Trapani, Sicily, ran into the principal, Franca Valenti.

From Valenti's casual observation that there ought to be some new way to teach Latin -- a required subject, which makes it even less appealing to students than its merely being an extinct language -- Vento came up with the idea to set his curriculum to music. And not to Bach or Monteverdi, but rather to the pop music the students already knew by heart. Thus, Schola cantans -- "the school that sings" -- was born.

The program consisted of two phases: First, the class studied Latin poetry in the usual way, learning about the author, the history, and the context of each piece. Then, before students began looking for music, they focused on learning the ancient rhythm of the text by beating it out on tables and making sketches on the chalkboard. Finally, they began to bring in CDs in order to find pieces that would work well with the text. You might not have thought so, but plenty of cutting-edge music out there goes really well with trochaic tetrameters. It wasn't long before students who had signed up for what was a mystery project were singing "Cras amet qui numquam amavit; quique amavit cras amet" to the breakdance funk of Afrika Bambaataa.

There were only a few restrictions: The music couldn't already have words, it couldn't be too long, and it couldn't finish out of sync with the rhythm of the poem. By the time they were ready to put music and words together, Vento says, "they felt the rhythm inside them." Eventually the students had assembled a repertoire of eight works, among them Virgil's Fourth Eclogue (to the electronic riffs of Music House) and several poems by Catullus, from the deeply romantic Fifth (to the strains of Algerian pop-rai singer Khaled) and Seventh (Jovanotti) to the frankly funny Thirteenth (Music House again). It was the time-tested pedagogic principle of Non nova sed nove -- not something new, but in a new form.

"The effect was to revive Latin from being a dead language to one reborn into something modern," says Vento. The result? Students were not only slaloming their way through forests of verbiage, they were also smiling as they went, and a few were barely suppressing the urge to dance.

Things went so well because Vento cleverly played another card: content. He chose poetry that was inherently interesting, that could still touch young hearts. Some of Catullus's most famous poems, such as the Fifth and the Seventh, are about love: "You ask how many kisses of yours, Lesbia, would be enough and more for me." Humor is another bonding ingredient, as in the Thirteenth, when Catullus invites his friend Fabullus to dinner but makes it clear that he's going to have to bring the food with him.

Horace is more sobering as he advises a woman to stop worrying about the future: "Carpe diem," he says: "Seize the day, trusting tomorrow as little as possible." The students set this melancholy ode to a pensive melody by Ludovico Einaudi. While listening closely to match rhythm and content to music, the students were more than a little surprised to discover that poets of more than 2,000 years past could echo their own thoughts today.

Perhaps the most interesting piece, from the point of view of their Sicilian roots, is the anonymous poem Pervigilium Veneris, or "Vigil of Venus." This work, which some scholars date around 400 AD, was possibly sung near Hybla (near Ragusa, Sicily) during the three-night festival greeting the advent of spring (April 1-3). Not only does it elaborately describe the natural world awakening, it contains the emphatic refrain "Tomorrow let him love who has never loved, and let him who has loved love tomorrow."

"It gave them a chance to feel like protagonists," Vento says with a smile, "and to see that private passion can be connected to school, to daily life."

There were some other benefits to singing together, primarily the fostering of teamwork. Principal Franca Valenti says, "Working together in a chorus gives discipline. They need to be sensitive to each other, and to synchronize with each other without speaking." ("We correct each other," one student says. "We want to make a bella figura," or good impression, adds another.) In other words, they must practice what we in the States call social and emotional learning.

When you get down to it, though, the students are still studying Latin. I ask them what point they see in that. "It's useful for learning about our origins," Dalia says, "and the study of a new language always opens the mind."

"It helps us study Italian," adds Alessandra, "because there are lots of rules, more than in Italian."

"And we get better grades in other subjects," says Samuela, "especially mathematics. Latin helps us understand rules better, whether they're in math or in literature."

She has discovered something neuroscientists, psychologists, biologists, and even mathematicians have been exploring. It may indeed be that the rules of Latin are good training for those of mathematics, but in this case the effect of music is powerful. This melding of music and poetry turns out to be more than just an entertaining little stunt. Decades of studies in the United States, Germany, and elsewhere demonstrate some interesting facts about how music aids learning in many ways -- easier, deeper, and more permanent ways.

Research from a wide variety of sources illustrate that there is a connection between music and the physical and functional development of the brain. Neurologist Frank Wilson, a former professor at the University of California at San Francisco, has found that involvement in music connects and develops the motor systems of the brain in a way that's unlike other activities. Brain-scan research shows that music more fully involves brain functions (in both the left and right hemispheres) than other activities studied. Wilson believes these findings confirm that music is necessary for the total development of the brain and the individual as a whole.

Schola cantans has received a substantial amount of publicity, in print and on television, throughout Sicily. But it isn't well known elsewhere in Italy. Interestingly, however, word of the program reached Jack Lang, the former French minister of culture, who has been exploring ways in which to adopt this method in French schools. It shouldn't be so difficult to replicate, but the teacher's enthusiasm, as I saw myself, is the one element that cannot be missing -- the sine qua non, as Signore Vento's students would understand it.

Yet whatever subject might be susceptible to musical arrangement, it is worth noting a point University of Wisconsin professor Frances Rauscher makes. She emphasizes that music's benefits aren't reserved solely for those who are good at it. "By demonstrating that music improves the intellectual functioning of all children, we have shown that music education is essential for optimal cognitive development," she writes. "Music education is essential for all students, not just the gifted and talented."

The students at Vincenzo Fardella high school may not know, or care, about what music is doing to their synapses. But some who frankly admit that "Latin used to put me to sleep" have found not only that Virgil rocks in the musical sense but also that ancient Latin poets can still touch their hearts. The Pervigilium Veneris ends on an unexpectedly poignant note, as the author hears a nightingale singing, and murmurs, "illa cantat, nos tacemus; quando ver venit meum?" "She sings, we are silent. When will my springtime come?"

Erla Zwingle, a contributing writer for Edutopia, is based in Venice.