I am going to connect a couple of dots here in thinking about personality and teaching. Stay with me -- and please let me know what you think.

Early last Sunday morning -- as in 4:15 a.m. early -- I had just gone through the security check at my home airport in Portland, Maine. I was booked on the 5:38 a.m. flight to Atlanta. I settled into one of the rocking chairs scattered throughout the departure area and pulled out my book. 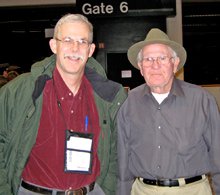 Soon after I sat down, an older couple came along. The man nodded to me in passing, and I nodded back. Experience has taught me that 4 a.m. at the airport tends to be a time and place when and where folks are most comfortable staying within themselves. This makes communication -- beyond the nod I had shared with this gentleman -- rare, and I reasonably assumed the nods would be the end of it. But when his wife headed for the restroom, this fellow strolled over to me and said, "Hello, I'm George Johnson, of Bailey Island, Maine," or something pretty close to that.

Suffice it to say, within 20 minutes I knew that George had been fishing lobster for 64 years and is still, between his boat and a nephew's, fishing over 1,000 traps. I knew that his first wife had died of cancer 15 years ago. I knew that several years after his wife's death, he had headed out of state to track down his current wife -- a former flame from high school days who had been widowed -- and that they had been married some seven years ago. I was told about his home and that the property had been in the family for generations.

I soon knew that he was recently featured in Esquire magazine as one of its "What I've Learned" voices. I knew that the location of his house has drawn more than a few folks from far away, who, having driven as far as they can toward the Atlantic, are bold enough to ask if they can take a look at his view of the rocky Maine coast. This, in fact, is how he ended up in Esquire. You see, a certain editorial type from the city stopped in uninvited, was met with hospitality rather than hostility, and, like me, received the gift of getting to know George.

Arriving home, I was thumbing through a current edition of a magazine belonging to my wife and I saw an article that began with something like, "If you want to go places in your job, don't simply bear down harder on the tasks at hand -- try being more friendly and smiling more" -- and that reminded me of George.

Here was a man who has lived a long and rugged life. Trust me; lobster fishing in Maine for 64 years would wear most anyone down. And yet, he was outgoing and cheerful -- not Pollyanna-ish, but clearly upbeat and positive. He was willing to come right up to me, smile, and say, "Hello, I'm George Johnson, of Bailey Island, Maine."

Classroom teaching makes for long and rugged days. String a bunch of them together and you'll have, like George has had, a long and rugged life. And schools, just like airports at 4 a.m., tend to be places where teachers, like bleary-eyed passengers, keep within themselves. Besides friendships with close colleagues, the only connections we often have to other teachers are those nods in passing as we move through the halls en route to class.

And what about your student-teacher relationships? Are they limited to little more than nods in passing, or do you, from time to time, stop and say something along the lines of, "Hello, I'm George Johnson, of Bailey Island, Maine"?

Hello, my name is Jim Moulton, and I'd like to hear your story.