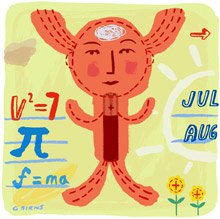 Year-round school? The idea is gaining popularity, especially with parents and policy makers who worry that kids, and our country, are falling behind in education. But for teachers, the idea is like asking a Broadway actor to take on a 300-night run -- and 50 matinees, to boot.

Every morning, when the classroom door opens, a teacher steps onstage and stays there until the last student exits. Unlike Broadway actors, teachers have no script to rely on, nor do they have a revolving cast of replacements. And an audience of students always senses when their teacher/actor is off his or her best performance. They may refrain from booing or throwing rotten fruit, but, in their own way, they can pen a scathing review.

I spent fifteen years as a middle school teacher, working hard to gain an understanding of students who vacillated between being needy children and insightful adults. I not only wrote curriculum tailored to my kids, I also resorted to improvisation when the story line broke down. That may have earned plaudits from my audience, but, by the end of a traditional school year, I was exhausted. Like my colleagues, I needed -- and deserved -- some extended downtime.

I'm aware that things have changed since I was a teacher. I know there are various approaches to scheduling a year-round school and that teachers are not expected to spend twelve months in a classroom without a break. Given a chronic shortage of good teachers, however, I can imagine the school year growing longer while the ranks of teachers fail to grow to keep up with the need for cast changes.

Friends of mine who are not teachers make the point that most Americans work all year, with only two or three weeks of vacation. True enough. But I respectfully submit that teaching is different than accounting, or marketing, or manufacturing. Teachers who approach their jobs creatively are artists who practice, every day, the fine art of teaching. Just as an actor needs time away from the stage to prepare for the next role, a teacher needs a breather to envision the next school year. Whatever you may call summer vacation -- a mini sabbatical or a hiatus, or simply a month or two of something entirely different -- it's essential. If you're moving too fast and your circuits are overloaded, you won't be able to create. You need to stop, dream, be renewed.

Those pushing for an expanded school year -- often, I suspect, people who have never experienced a September-to-June, face-to-face, and, at times, in-your-face relationship with a class full of students -- are quick to point out that teachers get more than two months of vacation in the summer, not counting breaks during the school year. What a cushy job; what a life.

Teachers know the truth. For them, the school year is an epic ten-month encounter that can be exhilarating and frustrating, joyful and miserable, progressive and regressive, and invariably physically, emotionally, and intellectually taxing.

The argument advocating the abolition of summer vacation holds that U.S. schools are losing traction worldwide because students here remain too idle for too long. During July and August, they lose momentum. Teachers, the premise goes, therefore need to be in the classroom for more days and longer hours, pumping the kids with facts and priming them with standardized tests so they can perform better. The curtain never falls. The show never closes.

Every parent knows that kids need to stop and play, unleash energy, or just lie back to watch clouds float by overhead. And teachers need downtime, too, to unplug, kick back, catch up on sleep, write poetry, read those books they started but never finished during the school year. Time off isn't about numbing your brain. It actually stimulates it again after a grueling ten months. You break the cycle. You step off the stage. In the process, you begin to see your upcoming school year with fresh eyes. You find the energy to bring something new to September's classroom.

The concept of a year-round school sounds like a script for a play with a predictable plot, certainly not one that encourages improvisation and artistry. So I say bravo to summer vacation; let's keep it sacrosanct.

Dan Ouellette is a former curriculum consultant for the San Francisco Unified School District who lives and writes in Shelter Island, New York.