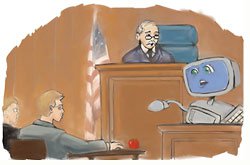 John Spencer, an eighth-grade teacher in Phoenix, Arizona, loves Good Will Hunting, bike riding, Dostoevsky, his wife, and his two sons. He finds it hypocritical "that politicians want to bail out failing banks and faulty mortgages, but punish schools with low test scores." And he's seriously considering moving down to sixth grade next year.

Anyone with an Internet connection can learn these details about Spencer by following the digital footprints he's left on TeacherLingo.com, his blog, MySpace, and other sites across the Web.

He maintains a high online profile to connect with like-minded individuals he wouldn't meet otherwise. "For me, blogging has been beneficial because it gives me a public method for conveying my thoughts," he says. He knows there's a price to pay for that forum, though, and takes readers' praise -- and criticism -- in stride.

Spencer is just one among the phalanx of teachers who have become online publishers in a personal or professional capacity by posting content on blogs and Web sites. Such teachers have gained a global audience, but they have also opened themselves up to a level of scrutiny, criticism, and legal liability that many aren't prepared for. Some assume that only a very small and friendly audience is viewing their online creations. Others think the First Amendment gives them the right to publish whatever they want or that anonymity protects them. Many are learning the hard way that they are mistaken.

The number of lawsuits filed against online publishers has increased dramatically in the past decade, from four filed in 1997 to eighty-nine in 2007, according to the Citizen Media Law Project.

And teachers aren't immune. The legal interpretation of "online publishers" reaches far beyond giant news sites to include individual content creators such as James Buss, a teacher at Oak Creek High School, in Oak Creek, Wisconsin. Buss was arrested and suspended from his job after posting an anonymous comment on a blog. The comment offered tongue-in-cheek praise of school shootings, but school officials were not amused and notified police, who traced the remark to Buss. Ultimately, the district attorney decided not to press criminal charges against Buss, but the incident damaged his career and reputation.

A year earlier, a public school teacher in Chicago resigned after being identified as the author of the anonymous blog Fast Times at Regnef High, which offered scathing depictions of teachers, administrators, and students at Fenger High School. Inappropriate postings on social-networking sites such MySpace and Facebook have also gotten teachers in a handful of states suspended or fired. The lesson is clear: Any online publication, even a single user comment, can expose educators to legal liability or put their careers in jeopardy.

The Case for Caution

That's not to say teachers should not publish online. But they should know the basics of media law and their employment contracts in order to avoid lawsuits, employer disciplinary action, and other problems.

Judith Silver, a Florida attorney who practices Internet law, says teachers need to use common sense when disclosing information about students, parents, or employers online or when making statements that could be libelous. Silver suggests a real-life analogy to illustrate the power, and dangers, of online publishing: "It's like printing up a bunch of fliers and distributing them to everybody on Earth." She also warns that online content has a long shelf life because sites such as the Internet Archive preserve old Web pages for posterity.

Words to the Wise

Here are some tips to avoid common pitfalls:

Teachers may be liable for information they publish that is untrue and harms the reputation of organizations or other people. Bud Hunt, instructional technologist for the St. Vrain Valley School District, in Longmont, Colorado, advises teachers to describe positive programs in great detail while leveling criticisms more generically. "If I disagree with something a colleague does, I'm not going to make that fodder for my blog," Hunt says. "I'll address the broader issue without calling him or her out." Hunt cites his fellow educational blogger Doug Johnson, who describes this strategy as "praising locally and criticizing globally."

Hunt also recommends that educators blog using their real names to promote accountability and lessen the likelihood of launching online character assaults. He discloses his name, workplace, title, and other details on his blog but makes it clear that the views expressed on the site are his own and not those of his employer. "The lines between personal and professional lives are changing right now," he says. "It seems that 8 o'clock to 3 o'clock never worked for classroom teachers and, as our digital tendrils stretch into all elements of our lives, it becomes a challenge for folks to figure out where their personal interests begin and their job ends."

Teachers also may inadvertently break the law by publishing private or personal information about students, colleagues, or others online. This can happen when a teacher mentions private facts such as a student's grades, an administrator's medical or financial condition, or other information that hasn't previously been made public. Similarly, some states prohibit publishing photographs of others without their permission.

The Goochland County Public Schools, in central Virginia, made teacher blogging mandatory in 2005. The district promotes privacy by distributing a permission form each year to obtain parents' consent to publish photos of students. Teachers also take care not to name students, reveal their personal details, or allow others to. For example, when parents submit blog comments along the lines of "Why did Johnny fail the test?" teachers delete the comment before it appears on the site and respond via email to protect the student's privacy.

When teacher publishing is done right, the rewards far outweigh the risks. "All the comments from parents and the community have been very positive," says John Hendron, the Goochland district's supervisor of instructional technology. "They embrace the transparency that the blogs bring to classrooms. They enjoy knowing what's going on." The key is to remember that the Web is a public space, and that you should publish with your audience in mind.

Legal Ease: Study up on Publishing Law to Protect Yourself

Here are two resources you can use to learn more about protecting yourself if you publish online: