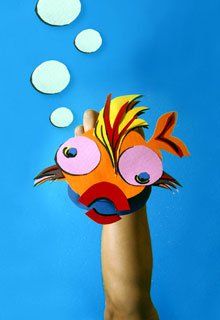 For Georgianne Walsh, of New Jersey, a beloved raccoon puppet known as Chester acts as the official greeter for her kindergarten students every morning. Amy Wallace, who teaches in New York City, created a puppet named Maya about whom her first graders became so concerned that Wallace purchased a tent for her to sleep in at night. In Las Cruces, New Mexico, Toni Gross's preschoolers are endlessly intrigued by a mouth-shaped puppet named Besos she uses to demonstrate oral movement when teaching speech and language.

These puppets, simple hinged paper devices, were all inspired by an innovative Web site called Puppetools.com. Brainchild of a boundary-busting educator named Jeffrey Peyton, Puppetools provides a wide array of resources designed to introduce teachers and students to a stimulating world of educational play centered on puppetry.

"When play enters the classroom, it transforms everything," says Peyton, who began his teaching career in 1971 at an inner city high school in New Haven, Connecticut. "And when the play involves puppets, the power opens up and moves into the hands of the students."

This is a man who is serious about play. Peyton feels that the whole concept has been marginalized in public education, mostly because so many teachers are intimidated by it. "The idea of communicating playfully using a device like a puppet is just too far out for most adults, and I think that speaks volumes about the classroom environment," he says. "Lots of teachers strive for standardized behavior, and I think children sense this deeply and suffer from it, from prekindergarten on into high school."

Since 1986, Peyton has immersed himself in what he calls "the brain science of play," and has presented scholarly papers on the subject in various forums, the latest at a symposium in Copenhagen on emotions, learning, and education at the Organization for Economic Cooperation and Development in 2004. He's been tinkering with his Web site since the mid-1990s, and his extensive studies have led him to believe that puppet play generates a high level of emotional involvement in kids. This engagement, in turn, causes young brains to make important neural connections. 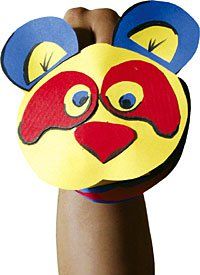 "Play is evolutionary psychology at work, so powerful that some of the more extreme political systems ban it because they know that when people play, they are developing resilience, as well as self-images that can be dangerously autonomous," says Peyton. "But my conviction is that play is energy that can be harnessed, and our goal is to mainstream play using this communication model of puppetry."

One of the driving ideas behind the Puppetools site, says Peyton, is to keep things simple so teachers can easily access both the concepts and the practical tools of puppetry. "We now have teachers picking up puppets and using them like a piece of chalk to do everyday classroom business," he adds. "These are not sophisticated, expensive puppets like those found on Sesame Street, because we've found over the years that a simple hinged paper device will do everything a $300 laboratory puppet can do."

Want to have your students interview Albert Einstein, or explore the character of a subatomic particle? How about illustrating the workings of the stomach? It's easy, using the "handheld language" of puppetry, says Peyton. "It's interactive and it's fun, and when you put one of these things on your hand, you're looking at an art form that is organic and alive. Because it incorporates so many different elements of behavior, it diminishes defenses, so kids feel safe and secure around it. In fact, they get very excited."

Georgianne Walsh's kids are clearly excited about Chester the Raccoon, a puppet she based on a character from a kindergarten book. Walsh, a twenty-seven-year veteran of the classroom who teaches kindergarten at Hilldale School, in Pine Brook, New Jersey, says she came upon Puppetools at a workshop, and has found the site to be an invaluable resource.

"I started with a little stick puppet, then used a paper cup, then a paper bag, and now I have access to a whole chest full of hinged paper puppets," says Walsh. "I learned on the Web site that you can actually solve classroom problems with puppets. I had a child who was a habitual crier, and when she'd get lonesome for her mommy, Chester would come over and put his little nose on her chin and say, 'I want my mommy, too, but we're going to make the best of it today.' One day I let her take Chester home with her, and she hasn't cried since."

For Amy Wallace, a kindergarten and first-grade teacher from PS 142, on New York's Lower East Side, puppets have provided a welcome relief from the rigorous strictures of the public school curriculum. "One of things that disappointed me when I began as a teacher was that there was so little room for fun and play in the classroom," says Wallace. "You always have to be on schedule, do this for ten minutes, this for twenty. But kids, especially in kindergarten and first grade, really need to play, so every once in a while, I'd pick up a puppet just to make things more interesting than the kids just listening to me all day." 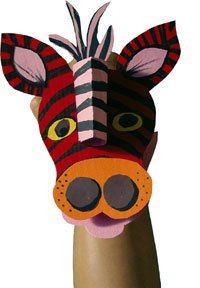 When Wallace discovered the Puppetools site, she says, she learned a range of applications for puppetry she hadn't dreamed of. "I started putting puppets into the hands of the children, and started to use them for behavior modification, and it absolutely changed my class," she adds. "The best thing is that you can make pretty much anything you want based on the paper-hinged puppet, because, it's just construction paper, scissors, and glue. When I do a new unit, I invent the puppets that go along with it, because they are such an accessible tool."

The puppet that became the unanimous class favorite was a lady named Maya that Wallace used for the phonics portion of a reading program. "When we weren't using Maya, she would lie there with her mouth open, and that was distressing to the kids, and they would wonder if she was all right, could she breathe, and so on," she says. "They were so worried about her that one day I brought in a doll-size tent for her to sleep in at night, and they loved that. When she would wake up and come out of her tent in the morning, that meant the reading lesson was going to begin, and they actually looked forward to it."

Speech specialist Toni Gross stumbled onto Puppetools when she was preparing to conduct a workshop on puppetry and language development. She ended up restructuring her workshop, and has been a regular visitor to the site ever since. "I'm really taken with the combination of the simplicity of the handheld puppet and the sophisticated Internet technology used to present the concepts," says Gross. "I've been teaching for twenty-eight years, and this has actually rejuvenated me. Now I've introduced it to other teachers, and they've become converts. I love the Web site, because it asks teachers to be themselves and get away from all the paper-and-pencil lecture work and go back to something that is very traditional, but so simple and playful."

Gross's work involves going into classrooms to provide therapeutic learning services. She finds that using puppets has provided structure and simplicity to what can sometimes be a complicated task.

"One of the things Puppetools offered was instruction in creating a personality for a puppet and maintaining that personality during its interaction with children," says Gross. "I created a puppet for speech development that was designed to demonstrate the oral movements of the mouth, and named it Besos, which means 'kisses' in Spanish. 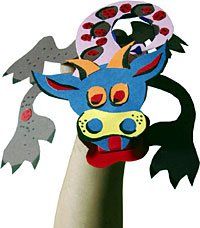 "Puppetools taught me that simplicity can be really complex, and Besos is an example of that," she adds. "She's basically an anatomically correct mouth, with teeth, a tongue, a frenum, a uvula, and lips. Of course, she has eyes to humanize her, and the kids just love her. When I start to give a lesson, they all yell, 'Besos!' And at the end she gives kisses, and the little three-year-old boys all swoon dramatically when they get their kiss. It really brings out the children who are reticent speakers, because they react so strongly to the character."

According to Jeffrey Peyton, Puppetools is now being used in some 1,000 classrooms around the world. People who register on the site free can participate in workshops and forums that teach puppet imagining and construction. They can also access a library of some 400 existing puppets. A tech-support service answers questions and helps teachers solve problems dealing with their puppets.

"Puppetools is not for every teacher, but it is for every adult who wants to connect with students playfully and imaginatively in their exploration of the world of ideas," Peyton writes on the Puppetools home page. "The young are already there, waiting for the world of school to become playful and open minded."