I heard a great story recently about a six-year-old girl in a drawing lesson. The teacher said this little girl hardly ever paid attention in class, but during this lesson she did. The teacher was fascinated.

She asked the girl, "What are you drawing?" And the girl said, "I'm drawing a picture of God." The teacher said, "But nobody knows what God looks like." The girl said, "They will in a minute."

VIDEO: Creatively Speaking: Sir Ken Robinson on the Power of the Imaginative Mind 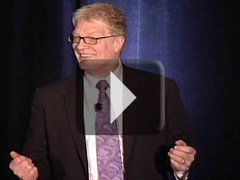 VIDEO: Creatively Speaking: Sir Ken Robinson on the Power of the Imaginative Mind

We run our companies like this, by the way. We stigmatize mistakes. Now, we're running national education systems where mistakes are the worst thing you can make.

The result is that we are educating people out of their creative capacities. Picasso once said that all children are born artists. The trick is to remain an artist as we grow up. I believe this passionately: We don't grow into creativity; we grow out of it. Or, rather, we get educated out of it. Creativity now is as important in education as literacy, and we should treat it with the same status.

Something strikes you when you travel around the world: Every education system on Earth has the same hierarchy of subjects. It doesn't matter where you go. You'd think it would be otherwise, but it isn't. At the top are mathematics and languages, then the humanities, and at the bottom are the arts -- everywhere on Earth.

And in pretty much every system, too, there is a hierarchy within the arts. Music and art are normally given a higher status in schools than drama and dance. There isn't an education system on the planet that teaches dance every day to children the way we teach them mathematics.

Why not? I think math is very important, but so is dance. Children dance all the time, if they're allowed to. What happens is that as children grow up, we start to educate them progressively from the waist up. Then we focus on their heads, and slightly to one side.

If you were an alien from another planet visiting Earth and you asked yourself what public education here is for, you'd have to conclude, if you look at the output -- who really succeeds, who does everything that they should, who gets all the brownie points, who are the winners -- that its whole purpose, throughout the world, is to produce university professors.

I like university professors, but we shouldn't hold them up as the exemplars of all human achievement. They're just a form of life. But they're rather curious, and I say this out of affection for them.

Typically, they live in their heads. They live up there, and slightly to one side. They're disembodied, in a kind of literal way. They look on their body as a form of transport for their heads. It's a way of getting their head to meetings.

If you want real evidence of out-of-body experiences, by the way, get yourself along to a conference of senior academics and pop into the nightclub on the final night. And there you'll see it: grown men and women writhing uncontrollably, off the beat, waiting for it to end so they can go home and write a paper about it.

So our education system is predicated on the idea of academic ability. And there's a reason for that. The whole system came into being to meet the needs of industrialism. So you were probably steered benignly away from things at school when you were a kid, things you liked, on the grounds that you would never get a job doing that: Don't do music; you're not going to be a musician. Don't do art; you won't be an artist. Then: benign advice. Now: profoundly mistaken.

Academic ability has really come to dominate our view of intelligence, because the universities designed the system in their image. If you think of it, the whole system of public education around the world is a protracted process of university entrance. The consequence is that many highly talented, creative people think they're not, because the thing they were good at was not valued in school, or was actually stigmatized.

We can't afford to go on that way. In the next thirty years, according to UNESCO, more people worldwide will graduate from school than did so from the beginning of history to the present. This is because of the transformative effects of technology on the nature of work, and the huge explosion in population.

But now, kids with degrees are often heading home to carry on playing video games, because you need a master's degree where the previous job required a bachelor's degree, and now you need a PhD for the job that once required an MA. It's a process of academic inflation, and it indicates that the whole structure of education is shifting beneath our feet and that we need to radically rethink our view of intelligence.

Second, intelligence is dynamic. Look at the working processes of the human brain: Intelligence is wonderfully interactive. The brain isn't divided into unrelated compartments. In fact, creativity, which I define as the process of having original ideas that have value, more often than not comes about through the interaction of different disciplinary ways of seeing things.

And the third thing about intelligence is that it's distinct. I'm doing a new book at the moment called Epiphany, which is based on a series of interviews with people about how they discovered their talent. It was prompted by a conversation I had with a wonderful woman named Gillian Lynne. She's a choreographer, and everybody knows her work. She did Cats and The Phantom of the Opera.

Gillian and I had lunch one day, and I said, "How did you get to be a dancer?" She told me that when she was at school, she was really hopeless. She couldn't concentrate; she was always fidgeting. The school wrote to her parents and said, "We think Gillian has a learning disorder." I think now they'd say she had ADHD. But this was the 1930s, and ADHD hadn't been invented at this point. It wasn't an available condition. People weren't aware they could have that.

So Gillian's mother took her to see this specialist. She sat on her hands for 20 minutes while her mother talked to this man about all the problems Gillian was having at school: She was disturbing people, and her homework was always late, and so on. In the end, the doctor sat next to Gillian and said, "Gillian, I've listened to all these things that your mother's told me. I need now to speak to her privately. Wait here -- we'll be back. We won't be very long."

As they went out of the room, he turned on the radio sitting on his desk. When they got out of the room, he said to her mother, "Just stand and watch her." The minute they left, she was on her feet, moving to the music. They watched for a few minutes, and he turned to her mother and said, "You know, Mrs. Lynne, Gillian isn't sick. She's a dancer. Take her to a dance school."

She eventually auditioned for the Royal Ballet School and had a wonderful career at the Royal Ballet and became a soloist. She later moved on, founded her own company, and met Andrew Lloyd Webber. She's been responsible for some of the most successful musical theater productions in history, she's given pleasure to millions, and she's probably a multimillionaire. Somebody else might have put her on medication and told her to calm down.

I don't mean to say we are all dancers. But in a way, we are all Gillians. There are millions of Gillians. I believe our only hope for the future is to adopt a new conception of human ecology, one in which we start to reconstitute our conception of the richness of human capacity. Our education system has mined our minds in the way that we strip-mine the earth: for a particular commodity. And for the future, it won't serve us.

We have to rethink the fundamental principles on which we're educating our children. And the only way we'll do it is by seeing our creative capacities for the richness they are, and seeing our children for the hope they are. Our task is to educate our whole being so they can face this future. We may not see this future, but they will. And our job is to help them make something of it.

Sir Ken Robinson is an international leader in creativity, innovation, and educational reform and author of Out of Our Minds: Learning to Be Creative. This article is based on a talk he gave at the 2006 TED conference.