Jordan Schreiber builds confidence in his tae kwon do students by helping them gain a deeper understanding of the material taught.

"Each day, I will live by honoring my parents and instructors, practicing to the best of my abilities, and having courtesy and respect for everyone I meet!" -- Part of an oath recited at the beginning and ending of each Karate for Kids class at the ATA Martial Arts center, in Martinez, California.

Jordan Schreiber greets a first-time tae kwon do student by complimenting his new uniform and white belt. The student is shy, and Master Schreiber takes him aside to teach him some basic poses and Korean commands. The boy's eyes stay glued to the red-and-black mat. Schreiber gently nudges him to look up.

"Look at my eyes. This is how you show me your attention. Now say, 'Thank you, sir.'"

A barely audible "Sir" is heard before the student takes his position in the class. Forty-five minutes later, after numerous kicks, blocks, and punches, two recitations of the student oath, a discussion of this month's life skill, a visualization exercise, and a hundred or so repetitions of "Yes, sir," the same student faces Master Schreiber, looks his teacher in the eye, and shakes his hand. It is a small but meaningful step.

Schreiber has been practicing tae kwon do since he was nine. An instructor for the last twenty years, Schreiber continued to teach the martial art while he was a Rhodes scholar in Oxford and while studying law at Harvard. He recently abandoned his law career as a public defender to dedicate himself full time to teaching at his tae kwon do studio in Martinez, California. He is the cofounder of Team Pride, a nonprofit organization that works with low-income children. Earlier this year, he attained the status of master, an honor only a handful of people throughout the world share each year.

On paper, Schreiber is a martial arts teacher, but his real goal is far broader. By shaping the social and emotional lives of his students, he hopes to prepare them for successful lives outside the tae kwon do studio and in the classroom.

The academic benefits of social and emotional learning are well established by now, and they're no less germane in a martial arts studio. Schreiber says that as his students learn to recognize and manage their emotions, care about others, make good decisions, behave ethically and responsibly, develop positive relationships, and avoid negative behaviors through tae kwon do, they also improve dramatically in the classroom.

Indeed, with the ability to self-regulate comes the ability to focus and take in new information that's vital for academic success. For that matter, establishing a goal for the week is as important as learning a proper stance. Schreiber rewards equally academic achievements outside the studio and physical achievements within. He follows up the students' martial arts sequences with discussions on the meaning of success.

Schreiber, who writes about his training and insights on his Web site, spoke with Edutopia before one of his classes. 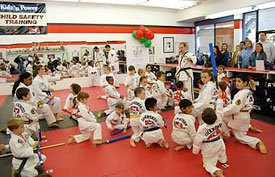 Edutopia: How does learning tae kwon do affect kids who may not be getting a lot of support at home?

Jordan Schreiber: There's a lot that kids get from being here, regardless of whether they are getting the same things at home. Part of it is social; there's a very supportive environment here, so there's no teasing that goes on, no one ridicules anyone else, and the class and I recognize people's accomplishments by applauding for them. For kids who lack structure, there is something attractive about that structure and having an adult mentor figure in their lives with whom they can talk about things.

I've had students -- I still have students -- who will come to talk to me about things that are going on at home or at school, kids who will bring homework to show me at the end of the day. That happened a lot when I was in New Haven, Connecticut. These kids, who weren't necessarily showing their homework to their parents or who didn't have a place to do their homework after school, would come to the tae kwon do school a couple of hours before class started and just sit down and do their homework.

And the classes here give the students an opportunity to stand out and be recognized for things that aren't necessarily valued in other environments. Doing well in school is cool here.

So much of what you're doing here resembles the curriculum in social and emotional learning that educators are implementing in schools, except you can continue to work with kids year after year. Maintaining a long-term relationship with students is vital to the success of SEL programs, yet this is really difficult to achieve within the school system.

Yes, I think one of the advantages I have over the school system is that I get these kids for more than a year. I have kids who are now seven and eight who I have been teaching since they were four -- and I may be teaching them, if I'm lucky, for another ten years. I don't think that kids have many mentor relationships in their lives, other than parental relationships, but martial arts students do.

Besides academic improvement, do you see your students exhibiting more pro-social behavior?

A good example is a teenager who started training with me a couple of years ago. He was incredibly shy, and I couldn't get him to yell -- you'll see when you watch the class that there is a lot of yelling. He wouldn't explain why, and his mom would say that he was depressed. Now, he's a black belt, and he decided on his own last year that he wanted to join the leadership program.

So, he's suddenly teaching classes, and he's getting up in front of these groups of kids and organizing them, and he's taken the initiative in a lot of ways. He comes to me and makes suggestions for how we can approach things. When we're organizing events such as our ATA open house, he'll say, "Next year, what we should do is this." He's full of ideas, actively involved, and a lot more confident.

When you began studying tae kwon do, how did you respond to the formality of the practice?

I remember that I had never experienced any of that type of structure before. The most glaring novelty was calling people "Sir" and "Ma'am," and bowing. It was surprising that when I started doing tae kwon do, it didn't feel uncomfortable at all; it felt normal.

I think this environment makes it easier to transform the way that kids behave because they know that something is different about this place compared with other places where they do activities, so they don't default to their normal behaviors. They're ready to try something new, and so the structure -- the bowing, saying "Yes, sir," "Yes ma'am," wearing the uniform -- it all facilitates that.

Besides the physical practice, you spend a lot of time teaching your students positive values, such as respect and empathy, within this formal environment.

There's a student oath that we say at the beginning and ending of every class, and one of the lines is "respect for my juniors and seniors." The students recite this oath together as a way of reminding themselves of the values and principles that are underlying their training. I always discuss the oath with my kids, so they understand that respect is not always for people who are higher up than you in the hierarchy but also for your juniors.

The irony there is that you are using martial arts to teach nonviolent behavior.

Yeah, and I think it's pretty common with kids who train in martial arts that they develop the confidence to not need to prove it to anybody. There are longitudinal studies showing that kids are less aggressive and less likely to get into fights when they've been doing martial arts training.

When did Team Pride get started?

After I got back from England, I ended up living in New Haven, Connecticut, for a year and running a full-time martial arts school there while deferring law school.

I had placed the school on the border of New Haven and a suburb in the hopes that I would draw some suburban kids who could afford to pay full rates, and their tuition payments would subsidize lower-income students from New Haven, but I had a lot more low-income kids than middle- or higher-income kids. I started thinking about starting a nonprofit, and I knew that there were other instructors nationwide with similar problems, so I started Team Pride as an umbrella that would enable all these other instructors to serve the kids in their communities.

Pride stands for "perseverance, respect, integrity, discipline, and excellence." It's an acronym my instructor came up with before the organization existed, just a way of encouraging those values in the students he taught.