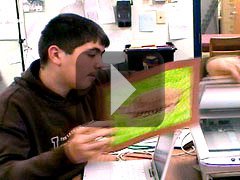 At first, it may look like they're taking part in a graduation ceremony, but the students who march across the stage at Maine's Falmouth Audubon Society to shake hands with their principal and teachers aren't walking away with diplomas. They're walking away with tangible results of their learning.

In this particular case, the eighty-five seventh graders from King Middle School in Portland each received a copy of "Fading Footprints," a CD-ROM they produced about Maine's endangered species. During the ceremony, which included thank-yous to teachers and experts who had helped on the project, some students explained the process. "I made sure all the links worked." Others talked a little about what they learned. "You can ask me anything about the harlequin duck." Then they all repaired to a courtyard for cake and punch.

"The state's Web site probably doesn't have as good information as what's in here," says Mark McCollough, a U.S. Fish and Wildlife Service expert on endangered species who had advised the students. "I want to share this with our regional office."

The students are heady with the knowledge that outsiders appreciate their work, and that it may be used by professionals. "The hard work that went into it -- people are noticing it," beams Amelia, the harlequin duck expert. "I know I worked a little harder because I knew it was going to be seen," says Miranda, another seventh grader.

Celebrations with everyone from parents to community members are an important part of the learning process at King, which has adopted the Expeditionary Learning Outward Bound model of personalized, project-based learning. At least twice a year, students, who stay with the same group of teachers for two years -- a practice called looping -- undertake four- to twelve-week interdisciplinary projects. Besides incorporating such subjects as art, science, and language arts, the projects include well-considered use of computer technology, which has been enhanced by the decision of the state to provide all Maine seventh and eighth graders with iBook laptop computers.

The culminating event can come in a number of forms -- a performance of an original play or presentation to younger students of a geology kit or production of a CD-ROM or a book or video, all of which incorporate state curriculum standards. Projects at King have included an aquarium design judged by local architects; a CD narrative of Whitman's "O Captain! My Captain!" by students learning English; Voices of U.S. (a book of immigrant stories), a guide to shore life of Casco Bay; original music composition and production; documentaries on learning with laptops; a claymation video explaining Newton's Laws; and a Web site on pollution.

Ann Brown, the eighth-grade science teacher who oversaw the claymation video production, likes the effect of such projects on the students, who really have to understand the concepts to portray them accurately in a movie. "I think it makes for an interesting way for kids to represent their learning," she says. "It's a lot more interesting than having them simply write about it or draw pictures of it because they really have to think about how to communicate with an audience and use text and images that make sense to people who haven't studied what they've studied."

"The goal for us at King Middle School is to create opportunities for all kids to do representational work about their learning," says David Grant, King's technology teaching strategist. He works with both students and teachers to ensure that any video or computer or Web production furthers the curriculum. "It's in the making of things that kids actually do their learning," he says. "When you start to make something, you look at it, you reflect upon it, and you begin to be informed by your own representation. And then in that way, you either go out into the world to get more data to support your ideas or you begin to think about something new in your mind and you start to re-represent. And that's how the learning gets deep."

It's also how to tell whether students know what they're talking about. "I'm sitting right down at the computer with the kid and I'm saying, 'Well, how does that show us Newton's Law?' And they might have gotten that answer right on the test. But when you sit down and look at their representation and you hear from them what they're trying to say, and you pull it apart a little bit, you wind up in this space where you really get to see what they know and what they don't know. And that's always where we want to be working from -- what they know and what they don't know. And working with these media allows that to happen."

Students work in teams to create media projects. Small groups allow them to share ideas and learn from each other.

Learning From Each Other

Brown likes the fact that video requires students to work in teams and learn from each other. "That adds to the final product because the different angles produce different ways of approaching the same problem," she says. "You get pieces of the best ideas coming together, so the final product is that much better, and they're also learning from each other and thinking differently."

King put an end to tracking and special education "pullout" classes at about the same time it adopted the project approach to learning and began emphasizing the use of technology. Since then, test scores have shot up -- a major accomplishment for a student population that is 60 percent low-income and 22 percent refugee and that comes to school speaking 28 different languages. Following years of below-average scores on the state achievement test, King students began outscoring the state average in six out of seven subjects in 1999, and they even moved into the top third in some subjects.

Giving the culminating presentation at the Maine Audubon Society instilled a sense of pride in the students.

A Gifted and Talented Education

Principal Mike McCarthy, a National Principal of the Year in 1997, believes that giving all students -- not just those at the top of the class -- the highest quality and most challenging education makes the difference at King. "I've heard people describe what a Gifted and Talented classroom would look like. It should include field experiences. It should include technology. It should include independent work. It should include work that's in-depth. That's basically what our school is. Everyone has access to that kind of learning."

The close relationship of students and their families with teachers through looping also plays a significant role in students' success, McCarthy adds. "That means they can get heavily invested in each other. And I think that's part of the reason we produce such great work. One kid said a few years ago, 'Nobody feels stupid around here anymore.' I think that was one of our highest achievements."