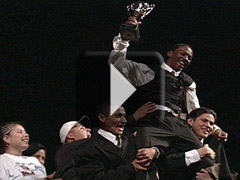 "This school has no chance."

That was Alejandro Piñeda's reaction after his first visit to the Fremont High School Business Academy, in Oakland, California, a small learning environment operating within a larger high school.

Piñeda, a student at California State University, Chico, had been asked in early fall 2002 to mentor the academy's students through his membership in a national organization called Students in Free Enterprise, which enlists mentors from the academic and business worlds to help university students create socially conscious, profitable businesses. The university students, in turn, work with high school students involved in Students for the Advancement of Global Entrepreneurship (SAGE), the secondary school branch of SIFE.

When he visited the Fremont High SAGE team in October 2002, says Piñeda, he learned that "Fremont High was known for its high violence and extremely low test scores. The school sits in an area that divides the South Gang with the North Gang, both of which end up meeting in between to fight for territory."

He watched as teacher and Business Academy codirector Amy Carpenter outlined the action plan for the coming spring's statewide SAGE competition, a yearly event in which students present their projects to a panel of 80 or more judges. "All but a couple of students were either sleeping, listening to their CD players, or talking to each other," Pineda recalls. He was close to writing them off. But on the way to tell SIFE director Curt DeBerg he wanted nothing to do with Fremont, something stopped him.

After all, the academy had produced a winning team just the year before. Fremont students were involved in SAGE both through required business classes and voluntarily, on an extracurricular basis. The Fremont SAGE team had won top state honors in spring 2002 for its Business Operations Management Business Academy Student Team (BOMBAST) project, which had nearly halved the school's 70 percent truancy rate. Noticing that students were leaving school for lunch and not returning, SAGE students had partnered with local restaurants to run a food cart on campus. Fresh burritos and sandwiches kept students on campus during lunch -- and, more important, afterward.

Nidya Baez and Veronica Garcia, the couple of students who were paying attention on the day of Piñeda's visit, were veterans of that team. They wrote to Piñeda, telling him they wanted to motivate their classmates. "Many students in the class did not know what SAGE was about in the fall, until we really hustled to teach them," Baez explains.

"I have a drive to just show everybody here at school that students can actually do something," Garcia says. "You have those certain adults that look at Fremont students and they're like, 'You guys are not going to do anything. You guys are lazy.' With SAGE, we have the opportunity to show them we're not stupid."

By Piñeda's next visit, in December 2002, the BOMBAST project was growing, and the students had created a peer-tutoring program (Club FrEd, short for "Fremont Education"), as well as taking on mini-projects such as Voluntary Income Tax Assistance (VITA) and the Business Student Empowerment Team. Through these projects, the students helped younger students with their schoolwork, enabled workers in their community to claim tax refunds, and taught fellow students about the SAT, graduation requirements, and community-service opportunities.

Students could work on projects solely during class or choose to commit more time. "We run BOMBAST from the daily classes," explains Baez. "For VITA, students were trained in the classroom; and during tax time, students signed up to work after school and weekends. Club FrEd was after school. If we were project managers or team leaders, we had time scheduled in each class to follow up on the projects and teams. We could also do this during the SIFE meetings after school."

Tiana Seymore, a SAGE student, chose to commit. She became a student coordinator for the VITA project, working directly with an IRS taxpayer-education coordinator to remedy the fact that $9 million had gone unclaimed in Oakland in 2002. This year, Seymore will take Garcia's place as executive director of the SAGE team.

Auditioning for the presentation team was nerve-wracking for students, but many said the experience built confidence.

Ivonne Perdomo also benefited from the program. At the beginning of the year, the shy native Spanish speaker was what adviser Heather Wilson characterizes as "an adept follower" who rarely spoke out in class. Through her involvement with SAGE, she blossomed, winning a place on the 6-person presentation team that led the SAGE members to a second state win and a victory over forty-three other teams -- some from as far away as Poland and Tajikistan -- in the international competition. "I learned not to be shy and to be confident of myself," says Perdomo.

To make sure students met California state standards, Carpenter adopted a curriculum from the Global Education Partnership, a nonprofit organization that gives students in low-income communities access to educational resources with a business focus, in 2001. The curriculum, From Vision to Action, helps students define their communities' needs and determine how to address them, then develop an action plan. (Read a Sample Needs Assessment Lesson from the GEP curriculum.) GEP also helped secure money, writing a $25,000 grant and raising extra money for special projects, such as stipends for students who participate in VITA and in peer tutoring.

Triumph on a Large Scale

By the 2003 SAGE state competition, the Fremont students had developed so many projects that one of their challenges was covering them all in the allotted time. Another was nerves. Advisers Kevin McNulty, Carpenter, Wilson, and Piñeda worked with the students to develop a script and hired a presentation coach, Jamie Kennedy, to help students speak with confidence and enthusiasm. Kennedy used acting warm-ups to break down the "protective shell" of inhibitions he says is typical of high school students. Piñeda recommended that the team never watch any of its competitors: "At at an age like theirs," he says, "if you see a team that you think is better than you, you will fall apart and lose hope."

Thanks to this devotion, and to hard work both in and out of the classroom -- Veronica Garcia mentions offhandedly that Carpenter and a teammate stayed up until 4 a.m. perfecting a PowerPoint presentation before one event -- the Fremont team was polished and natural. The students were judged the best in such categories as understanding "the importance of civic engagement in a democratic society" and using "technological skills to enhance the value of their projects" by a panel including CEOs of large businesses such as Walgreens and Radio Shack, as well as members of the educational and civic communities. (View the Complete Judging Criteria.)

Nidya Baez sees this as a larger triumph. "It's a tough world, especially in the business world," she says. "A lot of people are not used to urban students succeeding. I think they need to see that we are not just some rowdy group of students, but that we can be professional."

The students worked together closely in SAGE. In their plans for the Youth Empowerment School, they aimed to re-create that collaborative atmosphere.

Leaving a Legacy of Empowerment

In fall 2003, the students will see the results of their biggest endeavor yet: the creation of a new school. The students of the Business Academy were instrumental in developing YES, the Youth Empowerment School. At the request of Maureen Benson, now principal of YES, and Amy Carpenter, about fifteen of the SAGE students joined the two women last year in the planning and design process for YES, which is part of Oakland's Small Schools initiative. Funding will come in part from the Bay Area Coalition for Equitable Schools, an organization that helped students write the formal proposal for YES presented to city and school officials.

The design team used its From Vision to Action method to plan the school, and that model will also play a part in the school's structure. Benson describes the school as being for students who want to become leaders, not necessarily those who are already leaders. The school will start out with only 128 ninth-grade students, and all of them will go out into the community to gather data for an hour and a half each day.

"At the end of the ninth grade, with that knowledge, kids will be able to say, 'Here's what I'm really interested in, here's the project that I want to take on.' In grades 10-12, they'll be working on projects that came from a needs assessment of the community."

Through SAGE, students are “changing the world and our community.”

Optimism for the Future

Veronica Garcia and Nidya Baez, who will both attend the University of California at Berkeley this year, are optimistic that the YES students will benefit from the opportunity to empower themselves -- just as they have.

"There are tons of students out there, not only here in Oakland but all over the world, that have this drive but can't access it," Baez says. "They don't have the resources or there's not an adult to say, 'Hey, let's do it.' And we had that. Now, we can tell the world who we are and not accept it when they want to tell us we are something else. No. We're SAGE, and our programs are changing the world and our community."

For more information on career academies, read "An MBA for Kids: The Minnesota Business Academy" and "Learn & Live: Engaging in Real-World Projects."

For information on becoming part of SAGE, becoming a collegiate mentor, or obtaining funding for a SAGE program, visit the SAGE Web site.