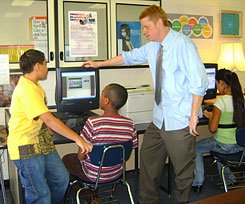 When he started teaching middle school five years ago, George Mayo immediately began using blog posts to teach writing because he knew that there are myriad benefits to using the technology. Chief among them, Mayo says, is that blogs "naturally put an emphasis on reflection."

At his Maryland middle school, Mayo asks his students -- many of whom struggle with reading and writing -- to create at least one blog post a week. After a couple of months or so, they can look back and see the accumulation of their writing, and they are surprised," he says. "It helps build their confidence as writers."

Indeed, as Mayo anticipated, blogs have consistently inspired the emerging writers in his classroom to reflect on their progress. In a recent post, for example, one seventh grader wrote about her academic growth by noting, "Before I started this class, writing was my enemy, but now I like writing. Writing all this makes me feel that I know more."

Sam, one of Mayo's former students, came to enjoy blogging so much that last spring, he asked Mayo whether he could continue his blog after the school year ended. Sam said he didn't want to start a new one precisely because he liked being able to look back at all his previous posts and, as he put it, "see how I've changed as a writer." Sam, who is now 14, blogs about his experiences as a ninth grader, and he says that as a result of Mayo's classroom exercise, "I've learned to write more personally, as though I'm talking one-on-one with a person."

Sam's reaction is exactly what Mayo had in mind when he introduced his classroom to blogging. Although he's still the only teacher at his school who uses blogs, Mayo is more convinced than ever of the value of technology-rich teaching strategies that, he says, "lead to deeper reflection."

A Critical Piece to Learning

Although reflection is often the first thing to go when teachers run out of time on a project or a unit, activities that prompt students to look back at what they've learned and accomplished isn't just busywork or an unnecessary step, educational experts say. In fact, encouraging students to pause and think about what they're learning and why it's relevant to their lives is a critical piece, according to Katie Charner-Laird, a principal at Lincoln-Eliot School, in Newton, Massachusetts. She is the coauthor of the book Cultivating Student Reflection, which describes reflection as "the mind's strongest glue" for making the connections essential to understanding, regardless of the subject matter.

"If you don't do the reflection in hands-on science, for instance, the whole thing can be meaningless," she says. "Kids may be thinking, 'OK, we built a stream table. It was fun. We got messy, we got gooey, we got sand all over the floor.' But what does that tell you about the Earth? What's the connection?

"If you have the reflective stance as a teacher," she adds, "you're going to end whatever class or project you're doing by pulling it together and asking the kids what they learned."

Teachers can use a variety of media -- from blogs to audio interviews -- to encourage and capture reflection, Charner-Laird says. In a busy classroom, the key is "setting up an expected structure so that the last five or ten minutes of class is going to be about reflection," she advises. She adds that the goal of highlighting reflection in the classroom is to encourage students to begin to reflect more frequently and naturally in their day-to-day lives.

Technology tools, in particular, can keep reflection exercises from becoming tedious or time intensive, reflection advocates say. Ruthe Farmer, for example, wanted to document the ways in which her middle school students' thinking evolved over a few months as they participated in Fair Play: Design and Discovery, an intensive preengineering program offered by the Girl Scouts of the USA.

Borrowing an idea from reality television, Farmer set up a self-contained "video confessional" in the corner of the classroom equipped with a stool and a video camera on a tripod, which she then surrounded with a curtain for privacy. When students had a free moment from their engineering investigations, they could duck behind the curtain, hit the Record button, and talk about how it felt to be an inventor.

"They already know how to do this from watching reality TV," says Farmer, who now works with the National Center for Women and Information Technology.

Farmer says the makeshift recording booth not only encouraged students to articulate what it means to think like an engineer or a scientist but also unexpectedly captured her students' feelings about the program. "From reading a written journal, I wouldn't have gotten the emotional attachment they had to their projects," Farmer explains. "On video, you can see them kind of puff up a little if they're excited or proud of what they're accomplishing."

With her video-confessional approach, Farmer provided a fresh way of eliciting genuine student responses, which Charner-Laird says is the key to fruitful reflection. Kids can grow weary of "the reflection question" if teachers always present it to them the same way, she says. As an example of what hasn't worked, Charner-Laird recalls a time when she was new to the classroom and she told her students, "OK, guys, it's Friday afternoon. Let's reflect on the week."

Their response? "A massive amount of groans," Charner-Laird says.

The experience taught Charner-Laird that her students had come to equate reflection with writing a predictable paragraph, and that's when she started asking herself, "What else does reflection mean?" She had a realization: "Some of us do it better in a conversation with another person. Some do it better in writing," she says. "We need to provide students with a lot of opportunities to reflect in different ways."

As an alternative to Farmer's do-it-yourself video method, for example, some teachers prefer to record their own interviews with students. This approach can range from person-on-the-street interviews with a handheld video camera to a more formal, sit-down interview, complete with a set of prepared questions.

Regardless of whether students are expressing their ideas on camera, through a blog, or on paper, the right questions can help make reflection a healthy habit instead of a groan-inducing exercise. "You don't want students giving you rote answers," explains Charner-Laird. "Keeping it open ended allows them more space to reflect."

Farmer encouraged her students to be reflective by posing a new daily prompt related to the design process. "I'd ask them to talk about specific questions: Where are you with your project? What challenges are you having? What are you planning to do about those challenges?" Farmer says.

Georgia educator and longtime edublogger Anne Davis adds that asking elementary school students to simply reflect on what they've learned could result in superficial answers such as, "I had fun," she notes. In a recent blog post, Davis instead suggests asking younger students the following specific questions:

Mayo says it also helps to model reflection. When classes started this fall, he gauged his students' reading and writing habits through a written survey. After several weeks of classroom blogging, he asked them to write about whether their attitudes about literacy had taken a turn toward the positive. Before sending them off to their blogs to reflect, he shared a post of his own about his hopes for his students as readers and writers. "They saw me writing in a reflective way," he says, explaining why he showed students the entry.

And, as Mayo observes, using technology to promote reflection has yet another benefit: A teacher can digitally archive student work, extending the reflection exercise beyond a single project or school year. "I try to save as much student work as I can," Mayo says. "I like the idea of students coming back ten years from now and finding things they worked on. Imagine if you started blogging in kindergarten and blogged all the way through high school."

"Wow," he says, pausing to consider the implications, "talk about reflection!"

Student reflection can take many forms, from a fleeting conversation about a learning experience to an in-depth analysis of a longer project. Technology tools can add variety and interest to reflection activities. Here are some examples of tech-driven tools that can lead to successful student reflections:

The end of a project is an ideal time for students to think back on what they've learned. At northern California's now-defunct Marin School of Arts and Technology, high school students put together impressive public exhibitions that combine art, technology, and music. In this documentary from the Web site for Project Exchange -- an initiative of MSAT's parent organization, Envison Schools -- a student named Cesar makes a powerful case for investing the time to prepare for his presentation. After watching her son do his presentation before an attentive audience, Cesar's mother reflects that her son "is not afraid of anything anymore. I saw today a grown-up man."

The Flat Classroom Project, a global collaborative project for high school students, concludes with student summits in an online meeting space called Elluminate. Students reflect on the challenges of collaborating with students from around the world and share their thoughts on what they gained from taking part in the ambitious project.

Answering a few quick questions about a learning experience may be just the right kind of reflection activity for younger students. Primary teachers can make good use of a collaborative slide show tool such as VoiceThread by asking students to record comments about a series of digital images and pictures from key moments in their learning. This strategy helps them retell the experience -- and remember it.

Classroom Displays is a group on the photograph-sharing Web site Flickr that collects photos of bulletin boards and other exhibits of student work submitted by teachers from around the world. Teachers can also embed audio comments from students that capture reflections on their work.