I was about to begin my first year teaching high school English when I got the news that students entering college from area high schools had a reputation for plagiarism. Determined to break this embarrassing -- and illegal -- habit, at least in my own students, I went on the attack. 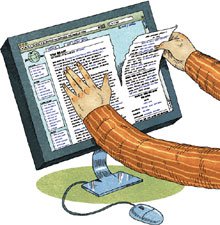 During the first weeks of school, I explained to the students what constituted plagiarism and gave them techniques to avoid it. I focused on the dangers of cutting and pasting, lazy paraphrasing, and the habit of borrowing information from the paper of another student. Long question-and-answer periods followed these talks, with students stymied by certain facts.

Some students said they knew never to plagiarize from a book, but they didn't think words published on the Internet were similarly protected. They wanted to know how a teacher might find plagiarism. I explained that certain Web sites existed to help easily identify the transgression.

At the end of these sessions came the moment of truth. I explained that the penalty for plagiarism in my class would be a zero on the offending project. After that, I had each student sign a sheet stating that plagiarism had been explained to them, and that they were welcome to ask me any questions about the practice. When papers were submitted to me or any other teacher, students accepted full responsibility -- and liability -- for the penalty if they were found to have cheated.

My first English classes were a nightmare; plagiarism was blatant and unrestrained. Students still did not believe that plagiarism is a crime. They assumed they would get another chance if they were caught, or that plagiarizing one sentence would be overlooked.

They found a variety of ways to test me in the early days. One student borrowed his parents' credit card and paid for a paper from an online site. This student denied his actions until the identical paper, printed from the same Web site, was handed to him. Another student tried the copy-and-paste method of plagiarism, but he forgot to remove the URL from the bottom of the page. Twice, students handed in identical papers, changing only the name at the top. Tears followed, but the grade remained the same.

In conferences with these students, I found the reasons for plagiarism were as varied as the students who tried it. The student-athlete who plagiarized an essay about the life of Thomas Jefferson cited lack of time-management skills as his excuse. One girl told me that she plagiarized because she could not write a paper that would be worthy of the grade her parents expected of her.

Each plagiarizer received a zero as a project grade, which in many cases caused parents to schedule conferences to plead their children's cases. I repeated my mantra to them: "Plagiarism is a crime. Each student knew the penalty from the first day of school."

In the beginning, I made many enemies. I earned the reputation as the teacher who gave students zeros on tests for "only plagiarizing one sentence." The mother of the first student I caught plagiarizing excused her child's act as something everyone in the class did; the only problem was that her son was the one I caught.

The battle lines had been drawn, but I waged my war against plagiarism, determined that, for my students' sake, I would not -- could not -- lose. As an educator, I needed to know that my students would be prepared for college, where there were no excuses for using someone else's words without giving proper credit.

In the years that followed, more students took the plagiarism promise seriously. Students came to me with questions about plagiarism, and together we worked on their papers to make sure they were cited correctly. Open communication was the tool that allowed students to feel comfortable stopping in during my free period to ask questions about avoiding plagiarism.

And then one day, it happened. Four years after my assault on plagiarism began, I had my first year of plagiarism-free writing. I had succeeded -- or at least I had won a one-year reprieve from plagiarism and angry parents.

Kim Bochicchio is a ninth-grade English teacher in Dunmore, Pennsylvania.

Go to these Web sites for help with identifying and preventing plagiarism:

Typing a random sentence of a student paper into Google is a surprisingly effective way of finding the original source of pilfered sentences.

Turnitin allows students or teachers, for a fee, to type in work to check for plagiarism.

The Purdue Online Writing Lab has a page for students with questions about plagiarism.

NoodleTools has free software that allows students to generate citations for papers and citations within papers.