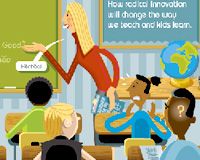 In a classroom of the future, students are learning Mandarin Chinese grammar. The students wear noise-canceling headphones and work with laptop computers.

One student is directing the work of a brick mason on his computer screen by having him assemble a sentence in the same way that he would construct a wall -- block by block. There are stacks of blocks with words on them in the background of the screen; each is colored for its potential role in the sentence.

The student directs the mason to pick blocks out of the appropriate stacks and put them in the correct order of a Mandarin sentence. When all the required blocks have been assembled in the proper sequence, the Mandarin word replaces the English on each block, and the student joins the brick mason in reading the sentence (which is written phonetically in the Roman alphabet).

Credit: Xplane
Future Classrooms -- Student Centric: This model utilizes the teacher as mentor, problem solver, and support person. The focus for this "floating" teacher is on serving individual students who are learning at their own pace. Click here for visual map 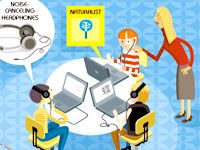 Credit: Xplane
Future Classrooms -- Student Centric: This model utilizes the teacher as mentor, problem solver, and support person. The focus for this "floating" teacher is on serving individual students who are learning at their own pace. Click here for visual map

Another student in the same classroom is learning the same material from the same software program by rote memorization -- listening to a native Mandarin speaker and then repeating the sentences, in a mode of learning familiar to her parents' generation.

Both students are learning to put together sentences that they'll use in a conversation together in front of the rest of the class -- some of whom are using the same learning tools as these two, but many of whom are learning Mandarin in other ways tailored to the way they learn.

This vision for the classroom of the future is not new. It's one that people have talked and dreamed about for years in a variety of forms: Students partake in interactive learning with computers and other technology devices; teachers roam around as mentors and individual learning coaches; learning is tailored to each student's differences; students are engaged and motivated.

But this is far from the reality in most classrooms today. The classroom of today doesn't even look that much different from the classroom of thirty years ago, save for some interactive whiteboards instead of chalkboards, as well as some computers in the back of the room. How can we start down the path to transform the classroom?

Simply investing in state-of-the-art learning software and technology won't move us forward. Many innovative learning-software approaches already exist, but they have not had much traction in the classroom -- and, where used, they have tended not to transform teaching and learning.

The answer isn't simply investing more in computer equipment and technology for schools, either. The United States has spent more than $60 billion equipping schools with computers during the last two decades, but as countless studies and any routine observation reveal, the computers have not transformed the classroom, nor has their use boosted learning as measured by test scores. Instead, technology and computers have tended merely to sustain and add cost to the existing system.

That schools have gotten so little back from their investment comes as no surprise. Schools have done what virtually every organization does when implementing an innovation. An organization's natural instinct is to cram the innovation into its existing operating model to sustain what it already does. This is perfectly predictable, perfectly logical -- and perfectly wrong.

The key to transforming the classroom with technology is in how it is implemented. We need to introduce the innovation disruptively -- not by using it to compete against the existing paradigm and serve existing customers, but to target those who are not being served -- people we call nonconsumers. That way, all the new approach has to do is be better than the alternative -- which is nothing at all.

To convey what we mean, we need to briefly explain the disruptive-innovation theory. In every market, there are two trajectories: the pace at which technology improves and the pace at which customers can utilize the improvements. Customers' needs tend to be relatively stable over time, whereas technology improves at a much faster rate. As a result, products and services are initially not good enough for the typical customer, but, over time, they improve and pack in more features and functions than customers can use.

Disruptive innovations tend to be simpler and more affordable than existing products. This feature allows them to take root in simple, undemanding applications within a new market or arena of competition. Little by little, disruptions predictably improve. At some point, disruptive innovations become good enough to handle more complicated problems -- and then they take over and supplant the old way of doing things.

To implement computer-based learning in a way that transforms the classroom into a student-centric one, we must heed the right lessons from understanding disruption. Cramming computers in the back of classrooms or in computer labs as a tool for the existing classroom model or as a subject in and of itself won't do the trick. Instead, we must find areas of nonconsumption to deploy computer-based learning where it will be unencumbered by existing education processes. Once planted in these areas, it can take root, begin to improve, and, over time, transform the way students learn.

What does this model mean in education? For computer-based learning to bring about a disruptive transformation, it must be implemented where the alternative is no class at all.

There are many areas of nonconsumption within schools where this method is already taking place. For example, online learning is gaining hold in the advanced courses that many schools are unable to offer, in small, rural, and urban schools that are unable to offer breadth, in remedial courses for students who must retake courses in order to graduate, with homeschooled students and those who can't keep up with the regular schedule of school, and for those who need tutoring. Online enrollments are up from 45,000 in 2000 to 1 million today, as organizations like Florida Virtual School and Apex Learning lead the way.

Although computer-based learning is in its infancy, classes that follow this approach possess certain technological and economic advantages over the traditional school model that should allow them to grow and improve rapidly. Not only does computer-based learning provide accessibility for students who otherwise would not be able to take the course, but it also enables one to scale quality with far greater ease. And as it scales, its economic costs should fall.

In the United States, on average, it already costs less to educate a student online than it does in the current monolithic model. Furthermore, over time, computer-based learning can become more engaging and individualized to reach different types of learners; software developers can take full advantage of the medium to customize it by layering in different learning paths for different students.

We think there will be a second stage to this disruption as well that allows users themselves to create learning software modules. A student struggling with a certain concept, or her parent or teacher, will be able to log on to a Web site where she can find a software solution that another student, parent, or teacher developed for that specific challenge. Parents and teachers will be able to diagnose why children are not learning and find customized instructional software written to help students who closely match their children in learning style. As content is used over time, users will rate it, just as they rate books on Amazon.com and movies on Netflix.

There are exciting possibilities on the horizon for education. The reason we haven't progressed down these paths doesn't have to do with the state of the technology. It has to do with how the technology has been implemented. Employing a disruptive approach presents a promising path toward at long last realizing the vision of a transformed classroom.

Clayton M. Christensen and Michael B. Horn are coauthors, along with Curtis W. Johnson, of Disrupting Class: How Disruptive Innovation Will Change the Way the World Learns.