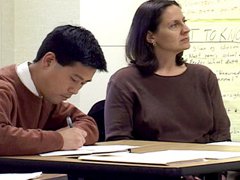 For years, Calvin Simmons Middle School represented all that was wrong with Oakland public schools. Principals came and went. Teaching was often more about trying to maintain order than it was about introducing concepts or building new skills. And students floundered; fewer than 15 percent worked at grade level in reading, writing, or mathematics.

Amid the chaos, however, there were pockets of hope -- teachers who collaborated and shared a vision for turning the failing school around, parents who were determined that their children would defy the odds and not only make it through Calvin Simmons but also graduate from high school and continue on to college. But year after year, these assets weren't enough to alter the school's downward trajectory.

In January 2005, the district announced that Calvin Simmons Middle School, named after the Oakland native who was the first African American to conduct a major symphony orchestra, would be no more. Under the guidance of the district's New School Development Group, teams of educators, parents, and community members would create two new small-by-design middle schools, each charged with the task of creating a vision and a plan for serving the students and families of East Oakland's Fruitvale neighborhood.

Nearly two years later, on August 28, 2006, the United for Success Academy opened in one section of the old Calvin Simmons Middle School. It began the year with 200 sixth and seventh graders and will expand to 300 students next year, when it adds an eighth-grade class. The school has a project-based-learning focus that infuses the arts throughout the curriculum. It also features intense instruction in the core subject areas; nearly four hours each day are devoted to math/science and language arts/history.

For Phil Cotty, a longtime science teacher at Calvin Simmons and now the principal of the United for Success Academy, the first few weeks of school have been about setting a tone for students and staff that makes it clear that though the building may be the same, the focus of the new school is decidedly different from that of its predecessor. Chief among these differences is the atmosphere of calm and order that pervades the United for Success Academy.

"Calvin Simmons was a chaotic environment," recalls Cotty, and the constant turmoil was challenging for teachers and students alike.

The start of the school year typically went something like this: The district would project enrollment at, say, 700 students, and assign staff accordingly. But routinely, just two-thirds of the students enrolled in Calvin Simmons actually wound up attending the school. Roughly three weeks into the year, the district would adjust its enrollment figures, reassign teachers to reflect the lower attendance level, and issue a new schedule for the classes. Just as students and teachers were getting to know one another and developing a rhythm to their days, it would be the first day of school all over again.

"It was exhausting for us adults, but it was almost impossible for the kids," says Greg Klein, a sixth-grade math and science teacher and part of the new school's design team.

Recognizing that enrollment numbers at the new school could still fluctuate -- and not wanting to repeat the chaos of prior years -- the staff opted for a new approach to the start of the school year. Week one was devoted to orienting students and teachers to the new school and to one another. While the enrollment numbers "settled out," students engaged in team-building activities and took diagnostic assessments that further informed placement decisions. By the start of week two, class groupings were finalized, the schedule was set, and students and teachers came back after Labor Day ready to get down to the business of learning.

There's no one thing that will guarantee success in the school's inaugural year, but for Cotty, the single most important element is developing a sense of community based on strong, positive relationships.

"We're connecting with parents in a monster way," says Cotty. "That's a huge part of our story." Not only were parents represented on the new school-design team, the school held five parent events before the new school year even started. Just a few weeks in, a cadre of parents staff a Wednesday-morning homework center (school starts late one morning a week to allow for staff development) and a new lunchtime salad bar. Parents also assist in the office and in classrooms.

For Glendy Cordero, an Oakland parent and a founding member of the school's design team, sitting down with teachers and having them listen to her dreams for her two children enabled her to hope for something better than the unsafe and chaotic environment that characterized daily life at Calvin Simmons.

"I realized how similar our goals are," says Cordero. "I realized that the teachers care about the kids and care about our opinions.

"It also made me more confident in myself," she adds, "knowing that someone as important as a teacher would listen to me."

Building community also means connecting with kids, so United for Success starts and ends each school day with an advisory period, during which a small group of students meet with a particular teacher, creating an in-school family of sorts to support students academically and personally as they navigate the rough waters of adolescence. The number of students each teacher works with has also been greatly reduced, improving both the quality and quantity of student-teacher interactions. (Science teacher Greg Klein, for example, now has 60 student contacts a day, compared to as many as 180 per day in the old school.)

United for Success is also about building a community of educators. That means a commitment to common planning and staff-development time. It means creating professional development that is respectful of teachers' strengths and needs and that treats them like professionals. "I used to hate 'PD,'" says Klein. "No one ever asked me what I needed. Now, I'm not only being asked, but I'm being listened to."

Developing strong connections to students and parents, and building a community of educators focused on a single mission -- such is the stuff that successful schools are made of. But though they are confident of the school's strong foundation, Cotty and his staff know that success is by no means guaranteed. And so they arrive at school early each morning, wearing the same uniform as their students: khaki pants and a green polo bearing the United for Success logo. They find hope in early successes, such as the school's four-day trip to the Sierra Nevada in early September -- the first time many of the students have ever ventured outside their city or even their neighborhood. And they recommit themselves each day to the task of working with students and parents to turn the school's grand vision into a reality:

Over the course of the year, we'll follow the progress of the students and staff of the United for Success Academy.