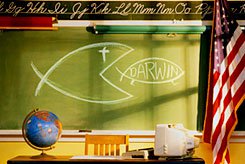 Ideology masquerading as scientific legitimacy is sweeping into American classrooms. There, it intimidates teachers and tries to unwind nearly a century of proven biological principles. If it succeeds, it will jeopardize our leadership in the life sciences, and, critics fear, we will matriculate students uncurious about biology and uninterested in careers in science and medicine.

The ideology is creationism. The target, not surprisingly, is evolution.

The battle is escalating: A recent study by the National Science Teachers Association reported that three of ten teachers feel pressure from students and parents to include nonscientific alternatives to evolution in the classroom. These educators are fighting religious and conservative-leaning school boards that want creationism and antievolutionary theories established as a regular feature in biology courses.

In addition to the strict creationists are people who support the concept of intelligent design (ID). These believers, led by Michael Behe, a senior fellow at Seattle's Discovery Institute, espouse a mix of doctrine and science to explain human creation and the breathtaking complexity of many biological processes. They believe the universe has some kind of overarching "designer," though they don't answer the question of who the designer is. Both groups -- the traditional creationists and the ID believers -- are putting pressure on the schools to spend the same amount of time teaching evolution as creation "science."

There is no scientific debate about evolution. Evolution is about cumulative change over time. Genetic mutations, as few as one in a million, exist in any population of organisms, and changes in the environment favor those creatures with the rare genetic advantage. Such an individual can resist changed conditions -- perhaps a hotter climate -- and has more offspring than its less fortunate peers. After many, many generations, the result is a new species. This mechanism is called natural selection. The fossil record, comparative embryology, biochemistry, molecular genetics, and population biology all confirm this process -- the survival of the fittest.

In spite of more than one-hundred years of solid evidence, however, scientists now worry that the evolutionary research of Charles Darwin will become a footnote. "Every year, we have 4 million high school students who take general biology, and it may be the last biology course they ever take," says Robin Heyden, a coauthor of Biology: Exploring Life, a best-selling high school textbook. "If half of them get a contorted or watered-down version of evolution, then that's a big number. These students will go on to sit on school boards and vote in elections."

She's not being paranoid. According to a Gallup poll conducted last November, fewer than one-third of Americans believe evolution is supported by hard evidence, and almost half believe God created humankind in its present form. In March, the Pennsylvania House of Representatives introduced a bill that would allow school boards to add instruction on ID to any curriculum. A recent article in the Washington Post reported that the teaching of evolution is being challenged in nineteen states. Though the Kansas State Board of Education approved new evolution-based science standards in early 2005, the state's ID chapter authored twenty-three pages of revisions with the intent to introduce the concept into the science curriculum.

Teachers aren't the only ones feeling the pressure. In March, a dozen Southern IMAX theaters, fearing backlash from conservative Christian moviegoers, refused to show Volcanoes of the Deep Sea because of a brief mention of evolution. And in Kentucky, a creation-education group called Answers in Genesis is building a $25 million museum depicting dioramas of humans who amble amiably alongside dinosaurs. In one exhibit, a triceratops with a blanket and saddle stands ready for a romp.

Presidents come and go, and so do groundswells of religiosity. It wasn't until 1968, however, that the U.S. Supreme Court not only struck down the 1925 antievolutionary law under which Tennessee teacher John Scopes was tried but also ruled that a 1929 Arkansas statute prohibiting the teaching of evolution was unconstitutional. Only since then has it been against the law for a school official to order a teacher not to teach evolution.

But attempts to put "creation science" on equal footing with evolution in public schools have routinely failed. If a discipline doesn't use the scientific method, it can't be taught as a science. By law, schools must be "religion neutral" and must not advance beliefs that a supernatural being created humans. A teacher can teach about religion but cannot be compelled to give evolution and creationism equal time.

Then there are the robust ramparts of colleges and universities. Many feel that higher education will serve as an antidote to the problems in secondary schools. Teenagers who get interested in science in high school, they say, will have no problem training to become scientists in a university.

However, something about this spasm of conservatism runs deeper than a dusty debate about whether "we come from monkeys." The problem of watered-down science instruction doesn't stop at high school commencement ceremonies. College graduates unsympathetic to the benefit of a good science education are entering the workforce. They go on to influence public policy. Some decide early against science careers. Both effects threaten American leadership in the biological sciences.

It is easy to forget that caught in the middle of the evolution ruckus are our students -- the next generation of scientists and science teachers. Bruce Alberts, president of the National Academy of Sciences (NAS), knows this. The author of the gold-standard college biology textbook Molecular Biology of the Cell and a former professor at the University of California-San Francisco, Alberts has made a career out of fighting for the continuity of science education. He knows that blossoming interests nurtured in secondary school can fuel scientific and educational careers later in life. But he's afraid the virtuous cycle will be broken.

In a 2004 article for the journal Cell Biology Education, he writes, "As scientists, we also should make it our responsibility to present the evidence for biological evolution to all of our students, especially in introductory courses. Most students who enroll in our introductory courses will use them as their terminal courses in science. At least some of those students will go on to careers as teachers or as public servants who will be asked to make decisions about whether to allow nonscientific approaches to teaching evolution to appear in science curricula."

Eugenie Scott (no relation to the author), executive director of the National Center for Science Education, an organization defending the teaching of evolution, agrees. She sees a dwindling pool of future researchers. "Evolution is one of the most powerful explanations of 'connectedness' we have -- it provides logic and sense to so much of biology," she says. "High school students who carry a poor, or no, understanding of evolution into college are less likely to pick careers in the biological and geological sciences. The result is fewer scientists." Scott notes that countries like Japan, Israel, and the United Kingdom, where religion isn't taught as a science, turn out more students who pursue science careers.

Even more troubling is that some of the brightest high school students will never be exposed to evolution in college. Most high schools offer Advanced Placement, or AP, biology, a college course taught by high school teachers. By passing the College Board's AP biology exam, a student can be exempted from taking the college introductory course. But the AP texts aren't exempt from meddling: In Oklahoma, a state Senate amendment allowed the state's textbook committee to insert a disclaimer into biology books that said, among other things, that evolution is "controversial" and that "any statement about life's origins should be considered as theory, not fact."

High school educators aren't the only ones responsible for exposing students to a thorough reckoning of evolution. Alberts has appointed Jay Labov, a biologist and senior adviser for education and communication for the Center for Education at the NAS's National Research Council, to lead the organization's efforts at improving teaching standards. Like Scott, Labov sees a marginalization of evolution in high school science classes. But inconsistencies in college biology courses exist, too. Teaching evolution one week and genetics three weeks later leaves students unable to connect the dots. "Too often, evolution is taught just as a topic, not as a repeating theme of biology," Labov says. "Students believe that just because they can't see evolution in action, it doesn't exist. Look, the actors on CSI [a popular television series about solving gruesome murders] use evidence to solve an unseen crime. There is evidence of evolution all over science."

Attacking evolution. Rewriting science textbooks. Government pressure on educators. It's a disturbing American vision. But it's not unique to America.

In the '20s, scientists worldwide vigorously debated the mechanisms of evolution. On one side were the Darwinians; on the other were supporters of Jean-Baptiste Lamarck, an eighteenth-century French scientist who believed that new physical traits could be willed into existence. According to Lamarck, a change in the environment causes a change in an animal's behavior that leads to greater or lesser use of a given appendage or organ. Those changes are passed on to the creature's offspring. Lamarck could not prove his theory, and by the '30s most geneticists had discarded the idea.

Lamarck's ideas were useless to geneticists but very handy for Joseph Stalin, who rejected any doctrine -- like Darwinism -- that challenged socialism. Willful ideology, not genetic determinism, was the key to his Soviet revolution. Stalin named a crop biologist, Trofim Denisovich Lysenko, to champion Lamarckism. Lysenko and his ilk linked "the survival of the fittest" to fascism and accused Soviet geneticists of sabotage, espionage, and terrorism. Supporters of evolution were jailed or shot. Scientific publishing was censored. According to historians, no genetics textbooks were published in the USSR between 1938 and the early 1960s and no evolution at all was taught to several generations of students. Stalin's political solution choked off scientific progress, modern genetics never reached the Soviet Union, and today Russia and the Balkans lag behind other countries in scientific and medical advances.

To be fair, an oppressive Soviet regime isn't the same as a modern America. Stickers placed inside Georgia biology textbooks by local school officials stating that "evolution is a theory, not a fact" were ordered removed in January by a federal court. In April, when the Kansas school board asked to hear pro and con "arguments" about evolution from experts, not a single evolutionary biologist agreed to testify. Authors and publishers have refused school board requests to mention ID and creationism in introductory biology textbooks.

Stalin squelched modern genetics in the Soviet Union, but the United States benefited from his actions. Theodosius Dobzhansky escaped the USSR and joined fellow geneticist Thomas Hunt Morgan at the California Institute of Technology in 1936. Together, Morgan and Dobzhansky laid the foundations for modern genetics, including recombinant DNA technology, which revolutionized modern biology. After gaining his freedom, Dobzhansky wrote, "Seen in the light of evolution, biology is, perhaps, intellectually the most satisfying and inspiring science. Without that light, it becomes a pile of sundry facts, some of them interesting or curious but making no meaningful picture as a whole."

We can only hope our young scientists see evolution as the inspiration for their own discoveries. Keeping science in the classroom ensures that we will have interested students who will support and fuel future generations of teachers and researchers.

Christopher Scott is an author, a biologist, and former assistant vice chancellor of the University of California-San Francisco. His book, The Stem Cell: Science, Ethics, and Politics, will be published in September 2006.

For ideas on how to stand up to the intelligent design movement, check out theNational Center for Science Education. You might also like to read the letter from National Academy of Sciences president Bruce Alberts.