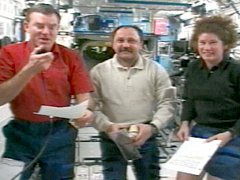 Editor's Note: Although the Lackawanna Trail Elementary Center discontinued participating in Space Day after this article was written in 2001, Space Day continues at many schools around the world. Read more about the event at the Space Day Space Day Web site.

"Houston, we have a problem."

Those chilling words from Apollo 13 astronaut Jim Lovell may have been uttered thirty-one years ago, but they still represent the perils that face space explorers in the twenty-first century.

Fortunately, some budding fifth-grade scientists have an answer: "Houston, we have a solution," proclaim the students in Marty Kerzetski's science classes at Lackawanna Trail Elementary Center, in Factoryville, Pennsylvania. In fact, they have a host of solutions for thorny and sometimes dangerous problems that befall astronauts in space. And the students have the charts, essays, prototypes -- and Space Day awards -- to prove it.

Each year, the Challenger Center for Space Science Education, in partnership with groups ranging from the Smithsonian Institution's National Air and Space Museum and the National Aeronautics and Space Administration to Lockheed Martin and the National Science Teachers Association (NSTA), issues design challenges to students in grades 4-8.

The student work is celebrated on Space Day, the first Thursday in May, with ceremonies and special space-related exhibitions and activities in Washington and also at schools, museums, and other institutions throughout the world. The celebration, designed to advance math, science, and technology education by highlighting exploration in space, includes a webcast from Washington that has given students the chance to ask questions of such space luminaries as John Glenn and Sally Ride.

A Lackawanna Trail Elementary Center student demonstrates a device designed to retrieve tools that float off in space.

Six of Kerzetski's teams have been honored for their design work. That work has included a Fire Eliminator, designed to, as the name indicates, put out fires in space, a Krabby Grabby, which retrieves equipment that may come loose or that astronauts may drop -- something that actually happened and cost a mission both time and money -- and Cosmic Cuisine, recipes for above-Earth dining.

For Kerzetski, the students' eager response to the design challenges represents project learning at its best. "They really have to come up with solutions," she says. "They have to think like scientists."

"I give them guidelines, and then I kind of set them loose," Kerzetski adds. "I think the more freedom that you give them, the more they get used to it, and the more they can handle it." Her confidence is confirmed daily, she says, as they "work wonderfully on their own."

Teacher Marty Kerzetski encourages her fifth graders to correspond with students in other states who are doing Space Day projects.

Wendell Mohling, associate executive director of the NSTA, says Space Day goes far beyond its obvious theme. "It's not just space for us," Mohling says. "It's the fact that you can use space as a theme in which to motivate students in the learning of science, mathematics, and technology. Anything we're doing in space is also applicable to what we're doing here on Earth."

Mohling also says that space is a subject that easily crosses academic disciplines: Mathematics and science interweave with the study of space, but so, too, do social studies and communications and interpersonal skills.

On one of the three days a week Kerzetski devotes to Space Day work, the class is abuzz with activity and chatter. At one table, some boys are drilling holes in Popsicle sticks and debating whether the holes are too small. At another, four girls are wrapping foil around a yardstick with fishing line connected to a winter glove. At still another, students are measuring lines and angles as they put designs on paper.

One student, the keeper of the flow charts, explains the design on his paper. The design turns out to be the Fire Eliminator. "It has pads all over it, so if it was jumping around in space, it wouldn't break anything on the walls. This is a vacuum. There's water inside it. Settings are low, medium, high. If you turn it on high, it sucks up fireballs. There's metal on the tube, so it won't burn up the tube."

At a bank of computers, students are logging on to ePals to ask or answer design questions of students from around the world who also are working on their designs. "How can you keep a tool from falling out of the grabber?" one email asks. "You could use a magnet," the Lackawanna students reply. "We need info," another email pleads. "Ask Jeeves and Space Day. We went there to get our info," Lackawanna answers.

Kerzetski says the groups seem to naturally find the strongest skills of team members. "Some of them are better at drawing, so they drew their projects," she says. "Some of them are good at talking, so they did the ePals contacts, and they love talking to students all over the country. Another nice thing was that they talked to actual scientists and astronauts."

Each team maintains a portfolio with all its work, which must include an essay and a detailed day-by-day record of every action -- from the very nitty-gritty of cutting and pasting to false starts and minor triumphs that result in the final design. A team may consist of a mission specialist, a design engineer, and an ambassador (the one who likes to talk).

One team from Marty Kerzetski's class perfects its Cosmic Cuisine for hungry astronauts.

From Textbook to Hands-On

Kerzetski learned about Space Day after a fellow teacher showed her an article about the program in the Weekly Reader. She headed for the Space Day Web site and was hooked. The site contains both a cornucopia of information on space and the very detailed design challenges created by the Challenger Center for Space Science Education.

For example, the 2001 No. 3 Design Challenge presents this situation: "During a routine maintenance check, a small communications antenna was knocked loose from the space station. Astronauts working outside the space station were unable to retrieve the antenna because it moved beyond their reach, and they will have to wait for a replacement to arrive on board the next shuttle mission." The "Urgent Action Required" is then presented: "To avoid future loss of equipment, NASA requests proposal for the design of a mechanical device which astronauts can quickly and easily operate while on EVA (extravehicular activity or space walk). The model retriever design must be able to extend at least 100 centimeters beyond its size when closed or collapsed."

Lackawanna students are awash in ideas for improving flight in space.

Kerzetski says that setting up the projects takes a lot of work. "You need to get them on the right track," she explains. "You have to have all of their information. You have to spell it out clearly for them, what you're expecting. I think sometimes it's easier to read from the book, give a worksheet, and move along that way." But the payoff in student enthusiasm and improved cooperation and problem-solving skills -- not to mention increased knowledge of space -- is well worth the effort, Kerzetski adds.

The NSTA's Wendell Mohling says the hard work is not only more beneficial, it's mandatory. "Science is not reading science," he says. "Science is doing science."