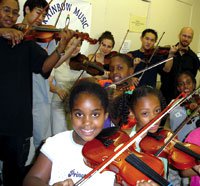 There are gangbangers in the neighborhood. Steel bars protect windows and doors. But inside a strip mall in the Crenshaw district of south Los Angeles, youngsters feel safe at the Rainbow Music Academy.

Here, four-year-old Zandra Leflore learns to bow a violin as her grandmother, Zandra Daniels, watches anxiously, offering encouragement from the sidelines. They are enjoying a rare offer in this inner-city neighborhood -- free one-on-one music instruction in a comfortable multicultural setting close to home. Students are asked to pay a $10 monthly fee, but no one complains if they can't.

"These children have a right to know something else besides police helicopters flying overhead and gunshots and violence," Daniels says. "And when you learn music, you have something for life, something no one else can take away."

The nonprofit school is the creation of violinist and music instructor Chan Ho Yun, who teaches at the private Colburn School of Performing Arts in Los Angeles and has also taught at local colleges. The academy's primary goal is teaching about sixty students to play the trumpet, double bass, cello, violin, or viola. And though hundreds of community-based music schools exist across the country, Yun believes this one is unique.

It's not simply that the school is staffed primarily with volunteers or that it offers urban children such as Zandra Leflore a free, or nearly free, alternative to gangs, drugs, and violence. It also aims to tear down cultural stereotypes by bringing African American, Asian American, and Hispanic children together to play music.

Fifteen-year-old trumpet player Freddy Ruiz says the racial mix is one of the things he likes best at the Rainbow Music Academy. Before or after recitals, and on any given Saturday, young musicians from all walks of life hold impromptu jam sessions in the hallways.

"It really is like one big family here," Ruiz says.

Ruiz plays trumpet in his high school marching band, but he has never received individual music instruction at school. He has taken a few general music classes in school, but nothing that would help him play better or improve his understanding of theory, he says.

Such a situation is not surprising, says Laurie Schell, executive director of the California Alliance for Arts Education. The percentage of California students involved in music education declined about 50 percent between 1999 and 2004, a loss of 512,366 students, even though the state's public school population grew almost 6 percent, according to a study by the Music for All Foundation.

Schell suspects that the foundation's report may overstate the problem somewhat, but she does believe there is a downward trend in music education across the country, especially as schools face greater pressure to meet federal and state testing standards in reading, math, and science. And activists such as Yun are stepping in to fill the void.

"More and more, the arts are being funded by private sources," Schell says. "And that's especially hard for school districts that have little financial resources and low socioeconomic status."

Violin teacher Timothy Maloof says that raising money is the school's biggest challenge, but it has had some success. Maloof is one of three teachers paid from a $20,000 grant from the financial firm Bear Stearns. The rest of the staff volunteers. An earlier grant from the California Music Teachers Association was used to purchase instruments, but students raised $4,000 during their own "practice-a-thon" as well.

"It's pretty amazing," says Maloof, one of Yun's former violin students. "I didn't realize just how gratifying this could be."

The donations, however, may not be enough to ensure the Rainbow Music Academy's future. A local nonprofit organization donated office space, but the building is slated for demolition. Yun says he does not know yet how the school will survive; he's sure it will, though, even if he has to set up a tent in a parking lot. Furthermore, he dreams of raising enough money to be able to offer music instruction to senior citizens as well. So he keeps knocking on doors.

"I get so energized when I see these young teachers really sweating it out in these hallways and really giving back to students," Yun says. "It's just very inspiring."

Amy Miller is the education reporter at the Albuquerque Journal, in Albuquerque, New Mexico.

Editor's note: Unfortunately, the Rainbow Music Academy closed its doors soon after this article was published.