School is just letting out at Edcouch-Elsa High School, in Rio Grande Valley, Texas, and norteño music pours from the cars leaving the parking lot. But not everyone is heading home so soon. In the bright sun outside the vocational-education building, four students have changed into shorts and T-shirts, donned dust masks, and turned on power sanders to work on the solar car they're building from scratch.

The Daily Grind: Solar-car team member Nohemi Flores sands the mold her team will use to shape their vehicle. 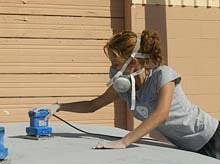 The Daily Grind: Solar-car team member Nohemi Flores sands the mold her team will use to shape their vehicle.

The students will spend the next four hours, and two whole weeks, perfecting the surface of a body plug from which they'll mold the car's exterior. While changing the paper on her sander, junior Karen Bermudez explains that time is essential to making a smooth mold. "If we get bumps or something, we're going to get turbulent flow," she says, "and we don't want that."

Bermudez should know. Though the eleventh grader won't take a physics class until next year, she spent the fall researching the principles of aerodynamics. She then applied her new knowledge to help design a body for the car that minimizes drag (the single biggest power drain on a solar car) yet maximizes the surface area for mounting the requisite solar array. Today, Karen and her peers are putting her research into practice.

Bermudez is one of seven members of La Maquina Solar, the only solar-car team at a high school or college in the Rio Grande Valley. The group came together last May to pursue the ambitious goal of creating a world-class solar vehicle to race this summer in a national competition. Instructors Jeremy Wickenheiser and David Padilla, however, have even larger aspirations: to teach advanced college-preparatory science through a hands-on project, to sharpen students' critical-thinking and leadership skills, and to use the team's success to spark more interest in science and engineering on campus.

Teammate Karen Bermudez changes the sandpaper on her sander.

If all of this sounds difficult to accomplish, that's because it will be. But the enthusiasm and rapid progress of Bermudez and her classmates suggests that even in its inaugural year, La Maquina Solar is an example of project learning at its best.

Becoming Contenders in a National Competition

When Wickenheiser arrived at Edcouch-Elsa three years ago to teach physical science, he met many students who, despite their high grade-point averages, were unprepared for college. So he started a science club, coached a Masterminds team, and sought to develop more ambitious projects that would challenge students the way scientific research had challenged him.

Drawing on his interest in solar power (his father installed solar arrays behind the family's home), Wickenheiser began researching solar cars in 2006. He connected with experts across the country and convinced school administrators that, with the right group of students, Edcouch-Elsa could be a contender in the Dell-Winston School Solar Car Challenge this July.

Fewer than twenty teams will likely qualify to race in the Dell-Winston event, the only international competition of its kind for high school students. Since 1995, its alternating cross-country and closed-track challenges have been the highlights of the Winston Solar Education Program, which provides materials, on-site visits, and workshops to encourage students to study science, engineering, and alternative energy. (Computer maker Dell, based in Round Rock, Texas, became a title sponsor in 2002.)

Vehicles in the 2008 contest must circle a 1.5-mile track at Fort Worth's Texas Motor Speedway for at least twenty-three hours over the span of four days, which means teams need both solid car designs and racing strategies. All teams will race in the morning and the afternoon, so, when designing their cars, they must consider time of day, the position of the sun, and the placement of solar cells to draw and conserve power. If your battery pack runs down too low, your race is over.

Knowing a project like this would require hard work and after-school hours, Wickenheiser carefully selected La Maquina Solar's team through a rigorous application process. Of the original fifteen members, only seven die-hards remain. They used their vacation time last summer to prepare a workspace, begin their background research, and write letters to potential sponsors, and they haven't slowed down since. 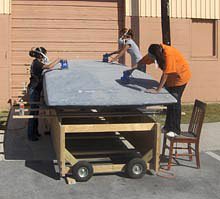 Because the team ultimately chose a complex car design and structure, members are spending more than twenty hours a week, plus many weekends and holidays, in the shop in order to finish the vehicle on time. The final car will have a body constructed of two joined pieces with a removable top section, and will resemble a split eggshell.

Although building a solar car from the ground up is a difficult task, the team's biggest obstacle may be financial: The project will cost $50,000 to $70,000 this year. To date, the team has raised close to $35,000.

Wickenheiser goes after big donations. The students sell barbecue plates at sports events, and they rally community members to sponsor cells in the solar array. (Each of the nearly 400 solar cells can be adopted for $15.) The students' dedication has caught the attention of some area businesses, including the local branch of American Electric Power Texas, which donated $2,000 and then contacted its statewide office. Julio Reyes, the company's vice president of external affairs, traveled from Corpus Christi to the Rio Grande Valley to see La Maquina Solar's progress, after which he committed $20,000 of American Electric Power's money to the project.

"What I saw was technology," says Reyes, who was impressed by the fact that the students were learning high-level science by doing. "They're learning about mixing the right chemicals to make fiberglass that will hold. They learned math to work with motors and the different panels they'll install. They had to determine the wattage that will translate into horsepower, and they had to balance the weight of the driver. The amount of engineering that has gone into the project so far is amazing."

Applying Themselves -- and What They've Learned

It's this hands-on engineering experience that drew Maria Garcia, now the team's captain, to the project. "We start from the design part, thinking about what it involves," she explains. The senior, who hopes to study engineering when she goes to college this fall, likes how the solar car allows her to apply her research to something tangible. "For the body, we had to learn aerodynamics," Garcia says. "For the suspension, we had to learn about friction and then decide -- with all that knowledge -- how we were going to design it, and then put it to work."

To realize their solar car, team members are using concepts from physics, math, electrical and mechanical engineering, and graphic design as well as skills such as welding, laying fiberglass, and manipulating Kevlar and carbon fiber. Wickenheiser says projects such as La Maquina Solar are vital because they give students time they wouldn't have in a typical science classroom to apply what they've learned.

To thoroughly cover the principles of aerodynamics, for example, Wickenheiser gave a few introductory lessons, then students continued their studies with independent research. They contacted solar-car teams, compared hundreds of vehicle images, and made models out of foam.

"It's science and engineering and putting the two together," Wickenheiser says. "It's looking and evaluating -- what makes this shape better than that shape?" He hopes next year, he'll be able to provide students with software such as COSMOSFloWorks to do computational fluid-dynamics modeling by inputting body designs onto a computer and simulating air flow on virtual surfaces for comparison.

For Wickenheiser, the critical thinking involved in building the solar car is as important as the science lessons. "They're building that body, but they're also the ones that designed that body," Wickenheiser says. "They know why it has this certain curve and why the frame has to have a certain seating requirement -- because the guy who drives it is six feet tall. They can take all those factors, which are quite complex, and put them all together to make one vehicle."

For example, after studying the Dell-Winston regulations and researching top-notch race cars, mechanical-team captain Juan Carlos Saenz decided to construct La Maquina Solar's car frame with tubing made of a light, strong steel called chromoly. "I had other options," he says. "Titanium is a strong metal, stronger than the chromoly, but it's a lot harder to weld, and it tends to snap under pressure. The chromoly won't."

It was this type of inductive learning that made Debbie Thomas, the school's curriculum and instruction facilitator, an early supporter of the solar-car project. "This class supports my philosophy of interdisciplinary study," she explains. "Give kids the skills and the parts, and have them figure it out." Thomas says she's waiting "with breathless anticipation" for La Maquina Solar's race in Fort Worth.

Taking It to the Next Level

This afternoon, the students have more immediate concerns. While Bermudez and company get busy -- and dirty -- sanding outside, three of their peers tackle other tasks indoors. Maria Garcia calls local businesses, looking for a bargain on an enclosed trailer to transport La Maquina Solar's car nearly 500 miles to Fort Worth. Wickenheiser helps another student, Nora Cleto, design a fundraising brochure. Saenz draws his design for the car's frame, which he'll submit to Dell-Winston, using AutoCAD software. He smiles when he says his older sister, who attends Texas A&M University, uses the same type of program in her college classes.

It's the sort of moment that makes Wickenheiser smile, too. He intended the solar-car project to boost students' confidence, leadership ability, and college readiness. He not only required students to complete an essay and participate in an interview to make sure they would take the project seriously but also asked students to share their ideas with experts (mechanical and electrical engineering instructors at nearby University of Texas-Pan American) in order to get suggestions.

Although each student works on every part of the car, each also has a specialty -- motor, solar cells, frame, suspension -- and is responsible for researching and developing it and for ordering parts. "They're the ones guiding the other students through that part of the car," Wickenheiser explains. Bermudez, for example, is in charge of the suspension. "I have to weld, put the shocks together, get the right measurements, and make sure it's strong," she says. "If it isn't, the car doesn't work."

The focus on expertise, coupled with the fact that only one team member will graduate this year, will come in handy as La Maquina Solar implements its multiyear plan. The students are already thinking about redesigning their introductory model for 2009's cross-country race and building a whole new car with advanced technology for 2010. Julio Reyes, of sponsor American Electric Power, applauds the project's focus on solar energy. "Eventually, we'll deplete fossil fuels, and we'll need alternatives, so you start at the schools," he says. "Hopefully, the students get into engineering programs, where they'll find the answer."

Several La Maquina Solar members do say they plan to study engineering in college. But it doesn't really matter what they study or how they finish in Fort Worth. The solar-car project has prompted them to apply advanced math and science in a real-world scenario, required them to develop critical-thinking and leadership skills, and fueled their interest in pursuing higher education. Edcouch-Elsa High School's effort is already a success, on and off campus. "Schools hold the key to educating not only children but also whole communities around solar energy," adds Reyes. "Everybody can benefit."

You don't have to be an educator to see that.

Visit these Web sites to learn more about developing a solar car or to order a book about the topic: