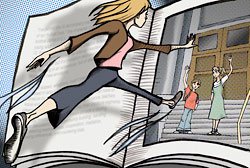 "I've picked you to accompany me on the greatest adventure of our mutual lives," the character Claudia tells her younger brother Jamie in E.L. Konigsburg's Newbery Medal-winning young-adult novel, From the Mixed-Up Files of Mrs. Basil E. Frankweiler. The adventure Claudia is referring to is running away from home to take up residence at the Metropolitan Museum of Art, but the invitation addresses young readers as well. Reading is an adventure, full of discoveries: new lands, new words, and new emotions.

That last subject, emotions, hasn't traditionally been addressed in language arts curricula. But in the past decade, spurred on by growing scholarly evidence of the impact initiatives in social and emotional learning (SEL) can have on classroom productivity and academic performance, teachers have begun to weave such lessons into their literature segments. Books like From the Mixed-Up Files provide a starting point for discussions about community building, handling anger, listening, assertiveness, cooperation, mediation, celebrating differences, and countering bias.

Such lessons enable students to "access their own background and emotions, and their relationships in the class, in a much different way," explains Kelly Stuart, national education consultant at the Developmental Studies Center, in Oakland, California. The nonprofit organization has spent the past seven years researching and compiling the Making Meaning program, a K-8 reading-comprehension curriculum that uses read-aloud books to develop social values. Making Meaning, in use in almost every state, "marries the academic and social," Stuart says.

One Making Meaning lesson plan is based on Lois Lowry's Newbery award-winning young-adult fantasy novel The Giver. Aimed at eighth graders, the curriculum helps students understand the underlying themes of the novel, in which young Jonas learns disturbing truths about his supposedly utopian community.

Students are paired up for the entire lesson, which spans several weeks. After each reading, they're asked to analyze character relationships, outline the plot of the story, and explore character change as a result of conflict and resolution in the plot. In "Heads Together" sessions of four students, they're then asked to discuss their feelings about what they've read. The lessons are carefully constructed to teach talking and listening skills, using strategies such as verbal prompts ("I agree with what you said, and I think . . . ."), clarifying questions, and confirmations.

The literature chosen for these lessons is important, Stuart notes. "By using texts with strong characters, with kids -- not just adults -- solving problems and taking on some big issues that may have cross-curricular applications, we find the kids not only connect to the stories but also really can learn a strategy that way, over time," she says.

At New York City's Morningside Center for Teaching Social Responsibility, Executive Director Tom Roderick created a curriculum based around the books The Librarian of Basra and Alia's Mission: Saving the Books of Iraq. Inspired by a July 2003 New York Times article by Shaila Dewan, the books tell the real-life story of Alia Muhammad Baker, chief librarian of Basra, Iraq.

Books are "more precious than mountains of gold" to Alia, so when her country is invaded and the library is threatened, she single-handedly organizes people to move an estimated 30,000 books to safe locations. Alia is a strong character who is proactive in a time of conflict, an important role model for kids who may feel powerless.

Roderick's lesson plans address reading comprehension questions such as "Who is the story mainly about?" and "What is Alia worried about?" But they also help students connect the story to their own lives with questions such as "Alia is worried that the books might be destroyed in the war. Are there things going on in the world that you worry about? What are they?"

The lesson then moves into practical applications: "Has there been a time when you made the world better by something you did?" If the students can't think of anything, teachers are urged to remind them that small things count, for example, "helping your mother, sending a card to someone who is sick."

Most stories and plays involve conflict and can provide valuable SEL lessons, says Roderick. "It's useful to distinguish conflict from violence; conflict and violence are not the same thing," he says. "If, in their language arts class, they're reading a story where the main character is having a conflict with somebody, you can say, 'What do we have here? We have a conflict. Did the character deal with it the right way? How do you think these characters are feeling?'"

These discussions can lead to real-life lessons. For example, says Roderick, "You might have kids talk in pairs about a recent conflict they've been involved with, and how it turned out."

In curriculum developed by the Orange County Department of Education's Institute for Character Education, conflict in From the Mixed-Up Files leads to just such a discussion. Claudia runs away from home because she "felt she was treated unfairly, that she had too many chores, and that her allowance was too small," the lesson plan notes. "What else could she have done instead of running away? What negative value illustrates her decision to run away?"

Good literature has long been a window into our psyches. As historian Barbara W. Tuchman put it, "Books are humanity in print." Incorporating SEL lessons into reading curriculum can put students in touch with the universality of literature, its power to transport us to different experiences and to connect and even change human beings. After all, as Claudia says near the end of From the Mixed-Up Files, "I didn't run away to come home the same."