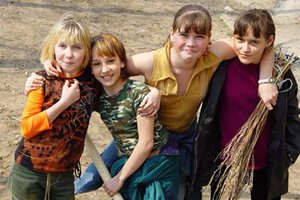 At a morning meeting in Louisville, Kentucky, a young child sits in a special chair and receives a round of compliments from her classmates. "Thanks for filling my bucket," she tells them. When her teacher asks her why she feels good, she explains with a shy smile, "They were nice to me."

Mornings often start with such honest sharing, thoughtful words, and concerned listening in Jefferson County public schools thanks to a district-wide initiative called CARE for Kids. The goal is to help teach children how to be empathetic, caring people and to create a supportive, trusting school environment where they can feel safe and thrive.

Jefferson County is one of several school districts throughout the United States embracing and implementing what's come to be known as social and emotional learning (SEL). Maurice Elias, a psychology professor at Rutgers University and director of the university's Social-Emotional Learning Lab, describes SEL as the process through which we learn to recognize and manage emotions, care about others, make good decisions, behave ethically and responsibly, develop positive relationships, and avoid negative behaviors.

SEL educators and researchers believe that by integrating SEL in schools, we can teach students critical life skills that will not only help their personal development but also their academic performance as well. When educators foster a caring school environment and teach core social skills, a virtuous cycle develops in which positive interactions beget more positive interactions. All of this creates a culture in which students and teachers respect one another and enjoy being together, further strengthening relationships and motivating both students and teachers to do their best.

As with many western ideas, the roots of SEL are as old as ancient Greece. When Plato wrote about education in The Republic, he proposed a holistic curriculum that requires a balance of training in physical education, the arts, math, science, character, and moral judgment. "By maintaining a sound system of education and upbringing, you produce citizens of good character," he explained.

Preparing children to be responsible, productive, caring, and engaged citizens is a timeless pursuit that continues to be the goal of education today. How best to do this in our modern school system, however, is a relatively recent and still evolving area of study and practice, and it's the main question the SEL movement seeks to answer.

In the late 1960s, during his early days at Yale School of Medicine's Child Study Center, James Comer began piloting a program called the Comer School Development Program. It was, as he wrote later in a 1988 Scientific American article, centered on his speculation that "the contrast between a child's experiences at home and those in school deeply affects the child's psychosocial development and that this in turn shapes academic achievement."

The School Development Program focused on two poor, low-achieving, predominately African American elementary schools in New Haven, Connecticut, that had the worst attendance and the lowest academic achievement in the city. With help from the program, the schools established a collaborative-management team composed of teachers, parents, the principal, and a mental health worker. The team made decisions on issues ranging from the schools' academic and social programs to how to change school procedures that seemed to be engendering behavior problems.

By the early 1980s, academic performance at the two schools exceeded the national average, and truancy and behavior problems had declined, adding momentum to the nascent SEL movement.

A Movement Takes Off

New Haven became the de facto hub of SEL research and included active researchers who would become key figures in the movement, such as Roger P. Weissberg, a professor of psychology at Yale, and Timothy Shriver, a Yale graduate and educator in the New Haven Public Schools. Weissberg and Shriver worked closely together between 1987 and 1992 (along with local educators) to establish the K-12 New Haven Social Development program.

Within that same period came the W.T. Grant Consortium on the School-Based Promotion of Social Competence, a project funded by the W.T. Grant Foundation and cochaired by Weissberg and Maurice Elias. This group of leading school-based-prevention experts and youth-development experts released a framework for incorporating social and emotional learning in schools, and the group listed the emotional skills necessary for emotional competence as "identifying and labeling feelings, expressing feelings, assessing the intensity of feelings, managing feelings, delaying gratification, controlling impulses, and reducing stress."

In 1994, as the term social emotional learning was making its way into the lexicon, the organization CASEL was created under its original name, the Collaborative to Advance Social and Emotional Learning. That same year, the Fetzer Institute hosted the first CASEL conference with researchers, educators, child advocates, and others in the field. These people were working on various projects that aimed to prevent violence and drug use in schools and to promote healthy choices, school-community connections, and generally responsible behavior. Nine CASEL collaborators coauthored Promoting Social and Emotional Learning: Guidelines for Educators (published by ASCD in 1997), which established and defined the field.

The concept of SEL was propelled into the popular culture in 1995 with a book by New York Times science reporter Daniel Goleman. With support from Fetzer, Goleman published Emotional Intelligence: Why It Can Matter More Than IQ, in which he argued that character matters and, more significantly, the skills that build character can be taught.

"Until the release of Emotional Intelligence, which was quickly translated into many languages, there was little contact between educators like me, who were developing school programs to cultivate social and emotional competence in children, and the psychologists and research scientists studying the neurological underpinnings and development of human emotion," says Linda Lantieri, cofounder of the Resolving Conflict Creatively Program.

Originally based at Yale, CASEL moved to the University of Illinois at Chicago in 1996 when Roger P. Weissberg became its director. In 2001, the board changed the name to the Collaborative for Academic, Social, and Emotional Learning to reflect the new research in the field and to make sure that academics were a part of the conversation. Weissberg went on to become and currently serves as president and CEO of CASEL.

CASEL's mission is "to establish social and emotional learning as an essential part of education." Initially, the organization focused on research that could build a body of data to convince schools and especially districts of SEL's efficacy. Weissberg says leadership from the top is crucial. "If we're going to do this work well, we need good guidance, sound policy and support, and an investment in teachers doing this in the most effective way."

In the years since CASEL was founded, its work to promote SEL has expanded and the group's influence has grown. More recently, supporters of SEL in congress have been urging their colleagues to include SEL grants and teacher training in the upcoming reauthorization of the Elementary and Secondary Education Act, through H.R. 2437, the Academic, Social, and Emotional Learning Act of 2011.

CASEL and many other organizations and universities continue to work to advance SEL in schools nationally and worldwide. Since the early days of the movement, several state boards of education and several countries have approved standards for social and emotional learning, and researchers continue to study its impact on children's academic and personal success.