Class is just getting under way, but there are no school bells or blackboards or books. Our ceiling is not acoustic tile and fluorescent light, but a bright blue sky. We are surrounded not by concrete blocks but by trees, bushes . . . and hundreds of tombstones.

We're Cemetery Scene Investigators from Tolenas Elementary School in Fairfield, California. As school began, students, teachers, and parents gathered for a real-world investigation with a creepy twist. But this was no simple gravestone-rubbing visit to the local boneyard. We were ready to break out the scientific gear and engage some problem-solving brain waves.

The following call to action kicked off our investigation:

Attention, CSI Members,
It's a crime! Thousands of cemeteries across the United States are disappearing due to building, erosion, weathering, vandalism, and general neglect. This is where your group, Cemetery Scene Investigators (CSI), comes in!

Your CSI team will become scientific and historic investigators by investigating not only the headstones and people buried under them but also by investigating the flora, fauna (bugs included), geology, topography, architecture, and cemetery layout. Your tools will be numerous as you document your local cemetery with global-positioning-system (GPS) devices and log specific information while photographing each headstone.

You will also investigate local geology and geography as it affects the cemetery, as well as investigating the people buried in the cemetery. You will analyze, organize, and present it on your own Web site, as well as add parts to a national database.

Cemeteries hold a strange fascination for us. Headstone rubbing and picnics among the marble urns and granite slabs were favorite pastimes a century ago. But a cemetery is more than a repository for the local deceased; it is a map of our past. Everyone loves a good story, and a cemetery is filled with great tales.

We studied a local graveyard so we could answer questions about our community and its history. Why is the cemetery in this spot? What do the designs on the headstones mean? Why did so many people die in a particular year? Why do people leave things like flowers and letters at a grave? 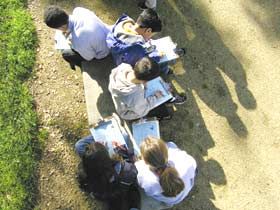 First, we contacted several community groups. We started with our local historical society, the cemetery district, and a nearby historical cemetery society in Sacramento, California. We made phone and email contact, explaining the purpose of our research and asking for help in locating historical documents. We also requested assistance in speaking with other students, meeting with other teachers, and finding appropriate times for visiting a cemetery.

Cemetery organizations were initially hesitant about having groups of eight- and nine-year-olds trooping among the headstones. They feared we would descend like a typical high-energy third-grade field trip. We assured them that the place where we hoped to go, Rockville Cemetery, would be treated with dignity. In addition, we would not go during a funeral.

Meanwhile, back in the classroom, the students got to work. Our first task was to study cemetery layout, so we created a 3D model of a graveyard using construction paper, glue, and sticks. (The models could not contain any blood, guts, ghosts, or other "spooky stuff.") 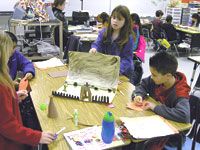 We then investigated headstone designs. The local cemetery had many types, including flat stones, obelisks, columns, and small crypts. We practiced recording their information using plastic or Styrofoam headstones and log sheets. We measured the stones, photographed them using digital cameras, and practiced image composition. (See "You Oughta Be in Pixels.")

We also introduced students to local topographic maps, as well as GPS devices, measuring tools, log sheets, and digital camcorders. GPS devices, which use satellite data to pinpoint the user's position, were introduced using a six-activity module that included basic functions of the tool, using and finding waypoints, and when and why to use a GPS device. With their GPS units and a topographic map from TopoQuest.com, students mapped a local park.

Before leaving for the cemetery, we had the students break into teams and focus on key concept areas of the graveyard, based on their interests: flora, fauna, comparative mapping, headstone design, and cultures represented. These groups had extra books (like plant- and animal-identification books), log sheets, collection baggies, special digital cameras, and other gear available to them.

Fairfield was a thoroughfare for many cultures during the California gold rush in the 1850s, so our cemetery offered lots of opportunity for exploration. We found graves of Chinese, Japanese, Mexican, Spanish, and other immigrants, so one day we tried to figure out why different cultures used various styles of headstones. On another day, we explored why many of the headstones face east. (Our best guess: Weather patterns in California come from the west, so this orientation was a way of preserving the carvings on the stones.)

Using scientific methodology, we divided the cemetery into sections or working grids. Teams worked within their designated grids to collect information and record it on data-collection sheets. Parents and student peers reviewed each sheet for completion and accuracy. 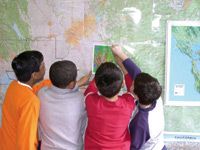 Once the fieldwork was done, teams reassembled in the classroom to gather and analyze the data. Students produced a clean design for the Web site, which included stitching together Apple QuickTime Virtual Reality photos (taken with our digital camera) to make 360-degree images. The combined work of all of the students culminated in an interactive Web site to which we added basic buttons and navigation using FrontPage's automatic features.

Our CSI project was an unorthodox activity, but a fun one. Through this investigation, we learned about our town and ourselves. Most importantly, the students learned that even the dead can teach us a lot.

For a better look at geo-literacy projects, standards, and processes, watch an Edutopia video, and visit Mrs. LaMar's Classroom Site.