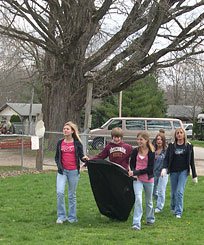 The next time your students organize a service project, ask them whether they know how a homeless shelter gets money to operate or what would happen if a youth-mentoring program didn't get enough volunteers.

Chances are, they don't know the answers. Even though more and more students do charity work as part of school requirements or to beef up college résumés, they don't necessarily get it.

That could change with the growing effort to deepen student understanding of what it means to give back. Through a range of programs across the country, students in grades 2-12 are learning the "why" behind charitable service, from philanthropy as part of good citizenship to the business of the nonprofit world.

One such program is the League, a service-learning program for schools that gets students actively involved in projects such as tutoring, planting trees, and collecting food and clothing for the homeless. Classes are set up as teams that compete in performing service and earn points for dollars raised and hours spent volunteering.

On the academic side, the League, which launched nationally last school year, uses a philanthropy curriculum called Learning to Give. The materials include handouts explaining the four sectors of the economy -- nonprofit, for profit, government, and family -- and the differences between them. It also provides instructions on how to help students find service organizations in their community.

Students at Connersville Middle School, in Connersville, Indiana, collected food for the Salvation Army last year during a League competition called the Drive. In the classroom, their teachers worked to give the Drive meaning beyond the act of charity. For one lesson, teachers asked students to leave their belongings -- books, backpacks, everything they brought -- at the back of the class, where the desks had been pushed aside. Next, the teachers asked students to write an essay on homelessness, but without pencils, paper, or desks, they couldn't perform the task.

The point was to give students a chance to grasp what it means to be unable to do something because you lack the basic tools. "It prompted a discussion about what would it be like not to have a home, not to have food, not to have what you need to survive," says school counselor and League coach Victoria Smejkal.

The Meaning of Philanthropy

The League and Learning to Give define philanthropy as the "sharing of time, talent, and treasure for the common good." The organization's hope is that after students finish the required volunteer work, they will feel compelled to do more when they're adults and will view volunteering as their civic duty. Studies show there is reason to be concerned about how people feel about giving their time to help others. According to a report from the Corporation for National and Community Service, the national volunteer rate fell to 26.2 percent in 2007, from 28.8 percent in 2005.

"Society is so me centered -- me, me, me," says Paula Hoffman, a teacher at Grand Ledge High School, in Grand Ledge, Michigan, who uses the novel To Kill a Mockingbird to teach her students the meaning of philanthropy. "If we don't continue to strive to teach what it means to be philanthropic, we're going to end up with a society that's so self-centered," she points out. 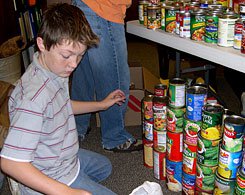 In the Las Vegas area this school year, one class in each of four high schools is taking part in We R Community, a pilot program that turns students into philanthropists and the classes into mini-foundations. The students will write mission statements, review grant proposals, and visit various nonprofit organizations before deciding how to apportion up to $5,000 in grants at the end of the school year.

Nevada doesn't require student service as part of graduation requirements or state standards, so the We R Community program is an extra, and the four participating classes are electives. The teachers get a checklist and handouts for what they need to do each month as part of the program, says Leslie DeVore, the program's manager, and they weave it into their regular lessons. Among the lessons to help them run their mini-foundation, students will learn how to conduct surveys to determine what would benefit their community and how to locate existing nonprofit groups.

Finding a way to squeeze philanthropy lessons onto the already packed plates of teachers isn't easy. DeVore says teachers of core academic subjects are too busy to take it on, and Victoria Smejkal, the school counselor in Indiana, admits that the League program can be overwhelming. "It's a lot to plan for and ask the teachers to do," Smejkal says. At her school, all students take part in the League during a special homeroom period at the end of the day.

The founders of Learning to Give tried to address the issue of fitting philanthropy into classes by creating lessons that meet state standards in social studies, language arts, science, and math. The lessons also meet philanthropy standards. Although no state has adopted any such standards, they define what it is that students should know about the meaning of philanthropy. Benchmarks include knowing what it means to be a good citizen, the role volunteers played in historical movements such as the Underground Railroad and the fight for civil rights, and even how to decide who should get funding and how to spend money raised.

For Connersville eighth grader Ali, the lessons -- along with the effort to collect food -- opened her eyes to the number of people in need in her community. Her school collected 2,266 pounds of food for the Salvation Army, and the class thought it would be sufficient. "They said what we collected was not close to being enough," says Ali. She realizes that the organization appreciated the effort, but she now also more fully understands how the Salvation Army operates, how much it needs, and who gets the food and clothing donations.

Ali also became increasingly aware of the social problems in her community. "There are homeless people. They need food so they won't starve," she says. "I realize that people need our help."