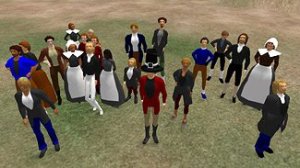 When the Whypox -- a plague that causes the afflicted to break out in red spots -- hit, residents had to go to the Center for Disease Control to learn about the epidemic. When the WhyFlu went around, those who got vaccinated were protected. But as new viruses escape from a biotechnology project, residents must scramble to develop new vaccines.

Then there was the deadly red tide, which prompted locals to take water samples to the Oceanographic Institution in an attempt to find solutions. And when Hurricane Alice landed, residents took a crash course on the impact of global climate change.

Such is life in Whyville, a Web-based virtual world that provides inquiry-based education for middle school students. Created by University of Texas professor Jim Bower -- a former professor at the California Institute of Technology and founder of CalTech's Pre-College Science Initiative -- Whyville looks and feels like a game to the kids who use it. For teachers, it is one more tool for delivering lessons in a package that delights their students.

Virtual worlds such as Whyville offer environments that users in various locations can access simultaneously via the Internet. All players, represented by animated characters called avatars, enter the same space to play (and learn) collaboratively. Many educators are experimenting with Whyville, while others are using the already well-known virtual world Second Life, which has a teen version called Teen Second Life, for kids ages 13-17. (Adults can also participate, but the company must approve them after a background check.) Many other virtual worlds exist out there as well, and more are surely on the way.

In Waco, Texas, the public schools are integrating Whyville into their eighth-grade career-exploration classes. One recent morning, teacher Johnbelle Line and several students from George Washington Carver Academy gathered for a lesson in teamwork at Whyville PlaneWorks, a virtual airplane factory sponsored by the Texas Workforce Commission. All the kids used computers to manipulate their personal avatars, which interacted in the same animated online environment.

Line observed as the students dragged images of matching plane parts together -- yellow wings with yellow engines, for example -- to "build" the largest number of airplanes in the shortest period of time. After each student tried the timed game alone, Line instructed them to work together, asking them pointed questions as they tried to find strategies to increase their team's efficiency.

"If you work alone, you can only get so far, but if you work with a partner, you can maximize the amount of clams you get," explains Donna McKethan, director of career and technology education for the Waco Independent School District. (Clams are Whyville's currency, which students can use to buy any number of virtual items for use in the game, from clothes to cars, or they can put their clams in a savings account.)

NASA, the Woods Hole Oceanographic Institution, the Getty Museum, and the School Nutrition Association are among the groups to sponsor projects in Whyville. The site, which students access through a Web browser, uses simple graphics, and most people find it easy to learn. Second Life is much more graphically complicated, and it allows sophisticated users to help build its virtual environment. But it also requires users to download free software, and people consider it harder to learn than Whyville.

"If you're looking for something for teens who have less sophisticated technical skills, you may want to bring them into Whyville," advises Barry Joseph of Global Kids, a New York City nonprofit organization that's exploring the educational uses of virtual worlds. But he notes, "Second Life is great for teachers interested in working in collaborations to create something that users can view in a community environment."

Global Kids recently partnered with the High School for Global Citizenship, a public school in Brooklyn, to have the school's freshman global-science students work in Teen Second Life. There, they'll participate in simulations that bring to life the sustainability issues that are the focus of the class. In one activity about the impact of garbage on Venice, students, via their avatars, will explore a three-dimensional virtual Venice, where they will interview residents and look for solutions to the trash problem.

So far, according to Assistant Principal Tracy Rebe, students have been enthusiastic to the unheard-of point of arriving early to their first-period class. Student Shaquille Sanders explains their eagerness: "You're having fun while doing schoolwork, which I think is what every kid likes to do." He says the students look forward to "being able to go places we can't go in school and do experiments that are maybe a little too dangerous for the classroom." Adds senior Allan Marshall, who's assisting Rebe (who teaches the class), "In Second Life, you're just free."

Liza Medina, a language arts teacher at Suffern Middle School, in Suffern, New York, had such good results holding literature-circle discussions in Teen Second Life that she has planned more. (See "Reading Round Table: Literature Circles Expand Thought" for more information about literature circles.) "Students who are normally shy in class were less inhibited while using Second Life," she points out. "My struggling writers were actually stronger writers while using a medium they use daily to communicate with friends: the computer. My unmotivated readers liked the program so much, they invested time in reading."

Medina's next project had students create avatars for characters in novels they'd read about in a unit on the American Revolution. Besides designing the look of the avatar, the students had to provide rich profile information for each one. That included a first-person description of the character's personality and role, a list of the character's interests, links to relevant Web sites, and a telling quote by or about the character, along with an explanation of why the student chose that particular quote.

Once the avatars and their profiles were ready, the students -- in character -- interacted in the virtual environment with characters from at least two other novels. "I liked dressing and visualizing a personality for a character," explains Erika, one of Medina's students. Erika's classmate, Jon Jon, adds, "I felt like I lived in the 1700s."

Like Tracy Rebe's students, Medina's were enthusiastic about the game-like aspect of the assignment. "Some of the teachers make learning really boring," commented one such student, Alex. "But when you're in Second Life, it's like playing video games while you're learning."

Technology integration: "Technology is one of our biggest goals," says teacher Tracy Rebe about her science class that uses Second Life. "But we've never really used technology as the curriculum. It's been a support -- you'll type up a paper or do Internet research -- but we've never used it as a format for learning before."

Student motivation: "For kids, social connectedness is a big motivator and makes anything more interesting," explains Whyville creator Jim Bower. Educators agree that students are enthusiastic about both the social and game-like aspects of virtual worlds.

Connecting: Virtual worlds allow for real-time interaction with far-away students or teachers. Penny Lundquist, of Chicago's Golden Apple Foundation, is creating a professional-development program for teachers that Second Life will supplement. "Second Life offers teachers and other educators the opportunity to converse, collaborate, and learn from each other despite geographical and time constraints," she notes.

Interactive learning: "Most educational products are essentially storyboarded, and there's some kind of outcome someone wants you to get to," Bower points out. "That's not natural to the way human beings learn. The way human beings actually learn is by interacting with objects."

Safety: Whenever you take students into an online environment where they can interact with strangers, safety is a concern. Still, many virtual worlds offer more protections than social-networking sites. In its 2006 awards, the Web site iParenting cited Whyville's safety measures as "best in class." Second Life's teen version admits adults online after they've passed a background check.

Technology: You need at least a few good computers and a strong Internet connection to use virtual worlds. To allow an entire class to use the technologically sophisticated Second Life, the High School of Global Citizenship and Global Kids relied on a Motorola Innovation Generation Grant to pay for new laptops for all the students. There are many grants out there, but it's OK to start small. For instance, teacher Liza Medina held a more limited virtual activity with students sharing computers.

Student motivation: "The students are so into it, it's sometimes hard to tear them away," warns Tracy Rebe. "They want to learn, but they're excited, and refocusing them can be hard. Still, this is a good challenge."

Know-how: Often, kids who have grown up with the Internet and video games may pick up the ins and outs of virtual worlds faster than even the most technologically savvy teachers. "I'm learning to be comfortable with my students being in their element, even though it's not my element necessarily," Rebe admits. But don't worry. There's plenty of support for virtual world newcomers, including groups that train teachers to use Second Life.

Going to the next level: Kelly Czarnecki, a North Carolina technology-education librarian, recommends that teachers avoid the temptation to simply stage virtual lectures and instead take advantage of the unique opportunities for interactivity in virtual worlds. Jim Bower concurs, adding, "I mean, they have a classroom already."

Advertising: Virtual worlds include an advertising presence because companies sponsor some of the locations and activities found in them. As always, when using a commercial product, teachers would do well to make sure students are able to recognize and evaluate marketing. 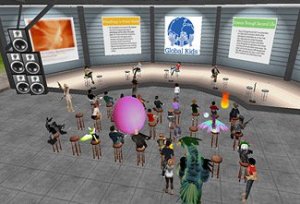 Bonus tip: Virtual worlds also are fertile ground for extracurricular activities. Czarnecki spearheaded her library's acquisition of space in Teen Second Life. Called the Eye4YouAlliance island, the library's virtual location holds regular events by and for teens, such as a virtual college fair attended by real-life recruiters and almost 200 teenagers.

Global Kids also uses Second Life for after-school activities. The group recently held a virtual press conference in Teen Second Life to launch projects developed by teens to tackle problems in their communities -- both in and outside the virtual world. At the event, Daniel, a teenager from the United Kingdom, introduced his project, Beat Bullying. "We hope to develop a space where teens can talk about bullying with other teens and how to tackle the problem," he explained.

Here's a partial list of virtual worlds aimed at kids, teens, and adults for you to explore:

The following are some of the many resources for educators using virtual worlds, which include information on how to buy or rent space in Teen Second Life: