Everybody loves Toy Story, the animated buddy pic that Pixar released in 1995. But Mitchel Resnick thinks the filmmakers got something very wrong in the movie.

Resnick heads the Lifelong Kindergarten Project at the Massachusetts Institute of Technology's Media Laboratory, and he spends a lot of time developing new technology designed to get kids thinking creatively. In Toy Story, he notes, two separate children's bedrooms receive a lot of screen time: Andy's room is jammed with dozens of crisp and clean toys that talk and play with each other. They also look like they just came out of the box.

Sid, however, lives next door, and his bedroom resembles an inventor's workshop, with toys pulled apart and recombined in various twisted ways. He's also cast as something of a deviant. 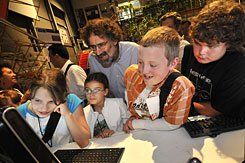 "But which child is more likely to develop as a creative thinker?" asks Resnick. "Andy, whose toys do everything on their own, or Sid, who is inventing his own toys?" The answer seems obvious to Resnick. He says, "Popular culture too often represents the most creative children as misfits." A kid may spend a lot of time playing with a toy, but little time designing and creating. Although the toy designers may learn a great deal as they create new electronic toys, Resnick doesn't see kids benefiting from the situation. "I'm skeptical whether children learn very much as they interact with them," he notes.

Resnick hopes to change that paradigm with Scratch, a one-year-old computer-programming language designed to make it easy for young people (ages eight and up) to quickly snap together interactive stories, animations, games, and art. They can then post that work on the Scratch Web site, where others can view it as well as critique and rework it. (See this Spiral Notebook blog entry for more information about Scratch.)

At MIT's first Scratch conference last week, 300 fans of the bold, new teaching tool came to share ideas. (Go to the conference Web page to view videos of the keynote presentations and a magic show, and, if you were there, add slides from your presentation or notes from sessions you attended on this wiki.)

Demand was so high, they had to shut down registration to the conference a month earlier. Attendees from all over the world packed the rooms to bursting. Visitors came from as far away as Australia, Germany, Mexico, New Zealand, South Africa, Taiwan, and the United Kingdom. One of the panels had an international group of Scratch-happy students who hailed from Belgium, England, Russia, and the United States. (Alas, none of the kids learned about Scratch at school.)

The crowd offered a snapshot of just how popular Scratch has quickly become. Since its launch last year, people have uploaded more than 175,000 projects to the Scratch Web site. In fact, a new project arrives every two minutes. Particularly interesting is how much Scratchheads collaborate: More than 15 percent of the projects on the site are later remixed by others. 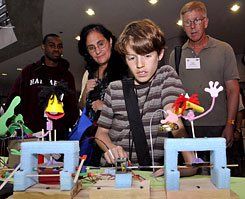 It would be easy -- and wrong -- to simply call Scratch a programming language. "Scratch shows us the importance of play in the role of education," says Jeanene Bluhm de Carjaval, who uses Scratch as an integrated part of the K-12 curriculum at Mexico City's Instituto Thomas Jefferson. "For too long, we've told students to be still, be quiet, and be bored -- you're learning. But if we can open up creative, experimental pathways in their minds, and show them that learning can be as fun for the students as it is for their teachers, we can accomplish incredible things."

Krystof Haber, who runs a one-man school for aboriginal students in Australia, puts it more plainly: "I use Scratch to get kids to come to school. They stay at school longer and do better." He notes that Scratch is particularly useful for connecting with kids who are not native English speakers. Indeed, the presentations at the conference offered a range of uses for Scratch, from teaching computer science and algebra to providing a social instructional environment where kids can teach other kids.

The secret to Scratch's success is that it employs what Resnick -- citing his inspiration, educator and researcher Seymour Papert (see an Edutopia profile about Papert) -- calls the low-floor method of teaching. In other words, it's easy to learn. Staying with the building metaphor, Resnick adds that Scratch has wide walls (because of its wide appeal) and high ceilings (because of its many possibilities).

"Hopefully, Scratch will get us to rethink our ideas about education and how people learn," Resnick states. "We want to help develop creative thinkers. We know that success, and even happiness, are linked to our ability to think creatively, and there are simply not enough opportunities to do that in our lives."

What do you think about the potential for using Scratch in the classroom? Please share your thoughts.

Here's how to get started -- and get going -- with Scratch: