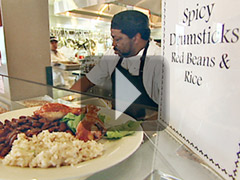 You can lead students to nutritious food, but can you make them bite? The answer to that increasingly relevant question is yes, if you get creative.

At Saint Paul Public Schools, in Saint Paul, Minnesota, Jean Ronnei, director of nutrition and commercial services for the school district, is sharing her personal passion for fresh, healthy food with students. A few years ago, Ronnei and her staff began testing healthy recipes in the district's nutrition center, and they've been doing it ever since.

In addition to serving students only whole grains and brown rice, rather than less nutritious white bread and white rice, Ronnei and her team have come up with a few hits (a fresh corn-and-barley salad with tomato and cilantro, for instance) and some flops (kids turned their noses up at her veggie meat loaf). They recently tested teriyaki chicken edamame over brown rice, which students loved. "I'm extremely proud of that one," she says.

From Portland, Oregon, to Atlanta, school menus are being redone with health in mind, even as budgets shrink and parents tighten their wallets. Managers are finding more appealing types of food to serve and more appetizing ways to serve it. And part of that appeal is education. So, along with their fruits and veggies, many students are now getting a serving of nutrition smarts.

Calories Down, Dollars Up

By now, we all have heard the gloomy statistics: According to the U.S. Centers for Disease Control and Prevention, the prevalence of overweight kids is some 17 percent for those ages 6-19. And research shows even higher rates for African American and Hispanic children. Obesity is considered a national epidemic, and concerned officials have begun to focus their attention on the school lunchroom.

More than 30 million American children eat federally subsidized meals in the National School Lunch Program, giving cafeterias leverage to make a positive difference in student diets. Even though the U.S. Department of Agriculture's nutritional standards have become more stringent, the 2007 School Nutrition Dietary Assessment Study indicated that only about one in four elementary schools served lunches that met the fat requirements. For high schools, the number was one in 12. Adding to the problem are such à la carte items as pizza and cheeseburgers that don't allow for portion control, because kids can buy unlimited amounts.

As cafeterias move toward offering healthier options, some food-services programs are having trouble meeting their budgets, because whole grains or fresh vegetables tend to cost more. In the 2008-09 school year, the federal government reimbursed $2.57 for each free lunch served, $2.17 for each reduced-priced lunch, and $0.24 for a paid meal. But the average actual cost of a reimbursable meal is around $2.91.

As the economy has dipped, the demand for school lunch has risen, so it may become even harder to incorporate better nutrition. "It's been a juggling act," says Katie Wilson, president of the School Nutrition Association. "In the last 15 years, we've been changing what we sell, reducing portion sizes, meeting calorie levels, reducing fats and saturated fats. But it's the perfect storm. We've all been required to meet nutrient standards, but the federal government is not giving us the revenue to support it."

Still, schools are finding ways to recalibrate their budgets and transform menus. Ricardo Medina, president of the Association of Latino Administrators and Superintendents, says many of the changes he's seeing in the nation's school cafeterias are cost neutral. Food-services managers, for example, may skimp on some items so that they can splurge on fruits and vegetables.

Some districts, like the Los Angeles Unified School District, are using their immense purchasing power to bargain for cheaper prices on healthy foods; smaller school systems are banding together to increase their buying power as well. "It's about a change in ideology that really isn't an additional expenditure," says Medina. "It's more about finding a balance in what they serve."

Keeping It Fresh and Local

When Roel Gonzalez became superintendent of the Rio Grande City Consolidated Independent Schools, in Rio Grande City, Texas, six years ago, he was shocked by the unhealthy nutrition habits of families in the surrounding Starr County. The county is 98 percent Hispanic and one of the nation's poorest, and it is estimated that more than 50 percent of adults there are overweight or obese.

The superintendent knew his students weren't far behind, so he developed a long-range plan. "We had to do it in phases," he explains. "If you sell something too quickly, people tend not to be as responsive to it."

Gonzalez started with the lunch menu. He worked with the food-services director to cut out all fried foods, then sugary snacks. They traded whole milk for 2 percent milk and then switched to skim because he didn't want to go cold turkey on the kids. They cut portion sizes, emptied vending machines of junk food, and reinvented the kids' favorite recipes, like enchiladas and burritos, with low-fat cheeses and lean meats.

Saint Paul's Jean Ronnei makes up for any splurges in menu items by cycling in cheaper foods like tater tots (baked, of course). They save money by preparing many items in bulk and from scratch, like their energy bars and banana chip bread.

"It's not Utopia here. We have chicken nuggets," she says. "But we're careful with how we spend our money. There are some things we can't serve very often but it's nice to introduce the kids to." Case in point: Ronnei's roasted rosemary potatoes. (See the recipe below.)

In Oregon's Portland Public Schools, nutrition-services director Kristy Obbink buys locally produced items like pizzas with lower-fat cheese, and whole-grain nutrition bars, because they're price competitive with national brands -- and she gets to choose the ingredients.

To get kids excited about eating more fruits and vegetables, the district launched Harvest of the Month: Obbink chooses 12 fruits or vegetables to feature throughout the year; then students learn about the farmer who grew them and where the foods come from, and they get to taste them, an approach many farm-to-school programs employ. "Instead of buying a truckload of a national brand and paying for storage," she says, "I can just place my weekly order."

Expanding the palette is essential to better nutrition. In Saint Paul, Ronnei held a coolest-new-veggie contest, offering kids nutritional education about four new foods they could taste -- portobello mushrooms, beets, jicama, and red and yellow peppers. The most popular offering, which turned out to be jicama, was on menus the following school year.

Many schools are encouraging sampling, a tactic popular in grocery stores, under the assumption that if you taste something and like it, you'll come back for more. In the Atlanta Public Schools, elementary-age kids at two schools can pick and choose at a fruit-and-vegetable bar (four fresh items, one canned) in the cafeteria, and at all the elementary schools there is one vegetarian entrée option served daily.

One key to getting kids to eat better may lie in cues in the lunch line. Marketing research finds that items displayed in prominent positions tend to be chosen more often than other items, suggesting that carefully placed healthy items -- fruit put where the chips and candy normally go, for instance -- may lead to better decisions.

It's difficult for a school district to improve nutrition if its kitchens are geared to deep frying, or if there are no kitchens at all. As part of the new federal administration's economic-stimulus plan, schools have been able to apply for grants to update their kitchens with such high tech equipment as "combi" ovens, which allow staffs to steam and bake in large quantities.

Another creative way to get an injection of cash is to apply for federal stimulus dollars to fund, say, a reading program and then use the freed-up money to improve nutrition education, which is what Gonzalez is hoping to do in his schools in Texas. "You know how we're always helping with reading, writing, and math?" he says. "I think that we should do the same thing for physical activity and wellness."

Brooke Lea Foster, a former editor at the Boston Globe Magazine, is a freelance writer in New York City. 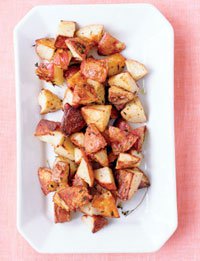 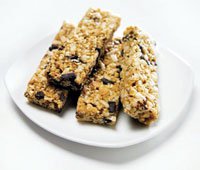