You may be pining for the newest iPod, the biggest flat-screen television, or a lightning-fast laptop, but where will your old technology end up? Middle school students in Arlington, Virginia, found some of their community's tech trash in an unusual location: littering a local stream. The students decided to tackle the problem, and in the process, they designed an award-winning community recycling program and developed their civic-action skills. 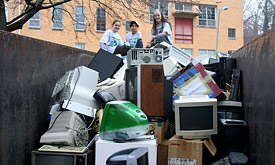 When Kathy Molina's sixth-grade science students at the H-B Woodlawn Secondary Program took a field trip to the Windy Run watershed, teams of students evaluated the health of the stream and its watershed from different perspectives. One team recorded the types of trash dumped in and around the water, and the students were surprised to find items such as radios, cell phones, computer keyboards, and personal digital assistants.

Although electronics waste accounts for only 2 percent of the material in U.S. landfills, it generates 70 percent of the toxic substances found there. For example, computer and TV monitors with cathode ray tubes can contain up to 8 pounds of lead.

The students in Molina's class, for which civic action is a required part of the yearly science project, wanted to do something about the problem they'd uncovered at Windy Run, but they weren't satisfied with a onetime stream cleanup. Molina says the group challenged itself with the question "Is there a way to persuade the community to change its practices?"

Coached by Molina, the team of four students created We'll Bring It to You, a curbside electronics-recycling project. Molina says the initiative quickly grew in scope. "Honestly, I didn't envision the magnitude of the project," she reflects. For teachers who might want to try something similar, she emphasizes the importance of mapping out the process as thoroughly as possible to figure out which people and organizations need to be involved at particular points.

Here are some tips for doing a similar project with your own students: 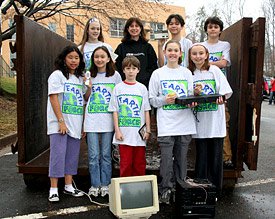 Molina assigns the watershed inventory as a class project each year. At its conclusion, the student teams compile their findings and create a class presentation describing the watershed's overall health. She also offers extra credit to students who want to continue their watershed work outside of school, and she gets support for these after-school efforts from Earth Force, a national nonprofit civic and environmental organization.

Molina notes that it's important for students to be realistic about how much they can do. When the We'll Bring it to You project started, the team that pitched it consisted of only four students, and Molina advised them to expand their group to ten kids. It proved easy to attract other students, which Molina attributes to the strength of the students' idea. She adds that parent and administrator support is essential, particularly for a project as challenging as this one and with students who can't drive or are unable to tote heavy electronic equipment.

Step 2: Do the Research

The team of sixth graders began its after-school collaboration by researching the existing electronics-recycling opportunities in Arlington County. They discovered that the county offered the service at a drop-off location on Saturdays for a nominal fee and at sponsored community-wide events twice a year. They wondered, however, how many Arlington residents knew about the existing programs and whether people found them convenient to use.

The students thought that residents would be more likely to recycle if the county picked up electronic items curbside, as it does for paper, plastic, and glass. They crafted a fitting slogan, "We'll bring it to you," and laid out a plan that began with a community survey to explore current practices and assess the appeal of their idea. To do the survey, though, they needed money and mailing labels, so they took their case to the rest of the school.

The students used Microsoft PowerPoint to create a pitch, which they delivered to H-B Woodlawn's principal, Frank Haltiwanger, and at the school's town meeting, a weekly gathering of students, parents, and staff members. At the town meeting, they requested funds for the survey and access to the mailing addresses for a hundred H-B Woodlawn households. Those attending the meeting gave a unanimous approval.

The survey mailing included self-addressed, stamped envelopes to increase the number of returns, and more than seventy households responded. Most that responded were unaware of the current county programs for electronics recycling and were enthusiastic about the idea of curbside pickup.

Credit: Kathy Molina
From Classroom to Boardroom: Molina looks on as students Elliot, Ibby, and Grace urge the county board of supervisors to support their group's electronics-recycling program. 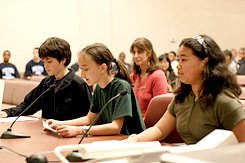 Credit: Kathy Molina
From Classroom to Boardroom: Molina looks on as students Elliot, Ibby, and Grace urge the county board of supervisors to support their group's electronics-recycling program.

Next, the students wanted to coordinate their own curbside pickup event. To do this, they needed permission from Arlington County officials, so they appeared before the county board of supervisors, armed with a PowerPoint presentation of their survey results. They also asked the board to waive the standard per-item fee of $15-$20 the county charges residents to recycle computers and TV sets. The board not only waived these fees, it also paid to put a special Dumpster for recyclables in the school parking lot the weekend of the event. Board members praised the project and asked the students to report back after the event. They also asked Kathy Molina to blog about the project on the county government's Web site.

The students promoted the event by sending a flyer home with every H-B Woodlawn student, and they asked that interested citizens reply via email to schedule a pickup. The team set up a Gmail account, and the kids, to practice Internet safety, used pseudonyms when corresponding with community members. The team got busy with parent volunteers to plot out locations and driver routes using Google Maps, and volunteer drivers included parents, school staff members, and older students.

The event yielded more than 430 items in four hours. The Solid Waste Division of the county's Department of Environmental Quality took the bin of electronic recycling away for processing.

Using digital cameras, iMovie, and PowerPoint, the students documented their efforts and returned to the county board the following month with a strong recommendation that the county implement an ongoing curbside electronics-recycling program. The board promised to seriously consider the idea, and county government staff members are examining the feasibility of a countywide program.

Molina, who hopes the students can return to a board meeting next year and continue lobbying for their idea, notes that the county has a new policy that gives community members the option to request pickup. One board member, who is also a university government professor, told the students they had "a true civics lesson," learning the ins and outs of the political process to get things done in their community. Molina adds, "They left sixth grade, in short, very empowered."

Molina and her students have attracted a lot of attention, winning Earth Force's Capitol Region Exemplary Classroom Award and the President's Environmental Youth Award, which they'll receive at the White House this April. Environmental Protection Agency branch chief Frank McAllister visited to talk with the students about electronics recycling, and in particular, about the anticipated avalanche of TVs that people will toss aside when analog broadcasts end in February 2009.

Molina appreciates the awards, but she's most enthusiastic about the positive and lasting impression the project has had on the student team members. "It's not every year you get that excitement out of kids," she comments. She thinks that Jonathon, the group's PowerPoint guru, summed it up best when he said, "We learned that even young people like us can do great things to help the environment. It's kind of neat to think that one day you'll see an electronics recycling truck and think, 'Hey, that's because of us.'"

Mary Kadera, a former teacher, is a freelance writer who lives in Alexandria, Virginia, and volunteers with local environmental organizations.

Visit these resources for more information about recycling electronic equipment: