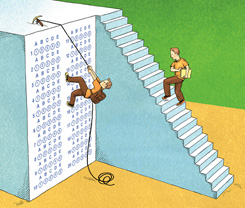 No issue in American education is talked about more or with more agony and frustration than the achievement gap. Current government policy, which I characterize wistfully as testing our way to equality, has done little to make things better. In fact, many of the practices introduced in the name of closing the gap have been profoundly counterproductive, in some cases worsening the problems.

For teachers in urban schools, the majority of whom are dedicated and well intentioned, the achievement gap is a hugely personal issue. The notion that we are not helping equalize opportunity is frustrating, demoralizing, and, frequently, overwhelming. When I read the exhortations of policy makers to narrow the gap, especially when the commands aren't supported with constructive plans of action, I get angry.

It's not that I deny the problem. I stare it in the face every day. I just can't stand the hypocrisy of policy makers who believe that issuing an edict is enough to make the complex issue go away.

I've learned, as coheadmaster of the Boston Arts Academy, a public high school, that any effective strategy for tackling the achievement gap must be anchored in honesty. At Boston Arts, we saw that African American male students were not doing nearly as well as their peers.

By looking at their grades, test scores, and participation in open honors (additional honors-level work given in mixed-level classes), we realized these students were at risk of falling further behind if we didn't intervene. After many faculty discussions, we decided to make raising the achievement of African American males a schoolwide goal.

It sounds simple, but it was deeply complex. The conversations that led to the decision were wide open, honest, and, at times, difficult. One teacher insisted that math is color-blind. "Race doesn't matter in my class," he said. The response from a colleague was blunt: "Nothing in school or life is ever color-blind. We have to be able to acknowledge that there is always the possibility that there is another agenda going on."

This kind of dialogue among the faculty led to discussions about who we are as individuals, and it brought up our own experiences with issues of race, class, and gender. It was a process of personal, as well as professional, development, and it led to deeper trust and profound respect among our faculty -- even when we could not agree. It also resulted, as hoped, in a plan to eliminate our school's achievement gap.

Each teacher developed classroom-based action plans and agreed to observe and give feedback to colleagues. One teacher put two of her African American male students -- one high achieving but unmotivated, the other low achieving -- in leadership positions in the classroom. She talked to them about it, and they agreed to keep a journal about this experience.

A colleague of the teacher watched as the approach brought new levels of success to the participants, and he was inspired to try something in his own classroom: He read his students an article by New York University researcher Josh Aronson called "The Threat of Stereotype."

He thought they would be surprised to learn that doing well or poorly on a test might be related to race or gender. He was right. Some of his students even decided to make a video about the questions raised in the article.

Viewing that student film, continuing our discussions, and focusing on classroom practices helped us adopt some common strategies. We had to find more ways to give students support in study skills and in reading. We changed our schedule to ensure that all students could benefit from a support or enrichment block during the school day.

We embarked on a schoolwide approach to teaching reading and writing, and we worked hard to become teachers of reading. Additionally, we instituted a summer reading program to help our most needy readers.

We also introduced a peer-mentoring program. We developed an advisory model so that more students would have at least one adult who knew them well. That adult, in turn, would be able to bring in a student's family members so that everyone was working together to increase the student's achievement.

There is no fairy-tale ending to this story. We have seen improvement, but not all our African American male students are on the honor roll -- yet. We continue to test, evaluate, and tinker with our models.

We've accomplished some tasks that ensure our future success. We've learned that the only way we can truly increase student achievement across all racial, language, gender, and cultural groups is by first talking openly about the gap. Local, schoolwide changes conceived in honesty can attack that gap, while nationwide testing will not change a thing.

Linda Nathan is the founding headmaster of the Boston Arts Academy.