Editor's Note: In 2009, the New York Harbor School joined the Urban Assembly group of schools, and then moved to a newly renovated campus on Governor's Island in the middle of New York's harbor in 2010.

Looking at an oversize New York City subway map and a list of science vocabulary posted at the front of the classroom, a few dozen freshmen at Brooklyn's New York Harbor School prepare for a day on nearby Newtown Creek, one of the nation's most polluted bodies of water. The students plot out which subway lines will get them there (take the L to the G). They jot down definitions to new vocabulary words (tributary, remediation, plume). They call out answers as their teachers, Ann Fraioli and Shane Riordan, pepper them with questions: What boroughs does Newtown Creek border? What large river does it flow into? Who still needs lunch tickets?

Garbed in the school's casual uniform of dark blue T-shirts, polo shirts, or sweatshirts printed with the school's name, the students watch intently as Principal Nate Dudley enters the room. With a no-nonsense confidence, he reminds them how important the harbor-science course -- which takes a group of ninth graders out for a daylong "classroom" on a local body of water once every two weeks -- is to their school.

"Remember, this class is the heart and soul of the Harbor School," he says. "This is how we make our theme come alive." Then he reiterates a mantra voiced by all the school's educators: "I expect great things of you."

That two-pronged message -- unfaltering belief in students, and in water as a powerful learning environment -- permeates every aspect of this public high school located in Brooklyn's working-class neighborhood of Bushwick.

That message appears to have gotten through.

"At my old school, teachers didn't care or expect anything from you," says Lianna Alvarez, a soft-spoken sophomore. "Here, teachers are on you. They make you believe that in the future, you can be somebody." Alvarez says she's considering becoming a lawyer so she can "help people in rough times."

Edny Munoz says he finds his on-the-water classroom a more relevant means of discovery than merely sitting at a desk in school. "Before, I didn't know what an estuary is or that you can eat fish from the Hudson," he says. "I never knew what PCBs [polychlorinated biphenyls] are."

It's this sort of testimony Murray Fisher hoped for when he cofounded the New York Harbor School three years ago. A graduate of Vanderbilt University, he worked for a year at Hudson Riverkeeper, a local program that protects the Hudson River.

"I learned more in that year than in all four years of college," recalls Fisher, who found his way to Riverkeeper through his friendship with Bobby Kennedy Jr., president of the Waterkeeper Alliance, the program's parent organization. "I learned about the history of the river, about every fish and their life cycles, hydro-engineering, power plants, and nearby cultures and their communities."

Fisher then worked for the Waterkeeper Alliance, which connects and supports local Waterkeeper and Riverkeeper programs and those of similar conservation groups. There, he saw lives transformed through hands-on water-related work. He also got a life-changing letter from a twelve-year-old expressing the desire to be a Riverkeeper for a stream near his home in Austin, Texas.

"That letter will always stick with me," says Fisher. "He wrote, 'What drives me crazy is that all these people who are making decisions about this water won't have to live with it as long as me. Why can't we kids be involved with making these decisions?'"

That letter helped fuel Fisher's idea of starting a school that would give urban kids, especially those from poor minority communities, access to water. He ran his idea by Richard Kahan of the Urban Assembly, a nonprofit organization committed to creating small public schools in under-served areas of New York City. Kahan told Fisher about New Visions for Public Schools, an education-reform group that helps fund small, theme-based schools in New York City. That group helped make his dream a reality with a four-year, $125,000-per-year grant funded by the Bill & Melinda Gates Foundation, George Soros's Open Society Institute, and the Carnegie Corporation of New York.

Since opening with a freshman class in fall 2003, the Harbor School has added a grade each year. Today it has 310 students; by spring 2007, when its first senior class graduates, it anticipates a student body of 400.

"The youth of New York City have a right to use and learn from the biggest and richest thing around them, New York Harbor," says Fisher. "We're trying to assert that right and to really give ownership over the harbor to these kids. A lot of responsibility and learning comes with that ownership."

The school immerses students in hands-on nautical courses such as the harbor-science class. Math, history, and English classes also revolve around a maritime theme whenever possible.

Integrating this theme poses a challenge for Melissa Jones, who is head of Harbor's English Department and the school's literacy coach. "It's been difficult," Jones says. "Our population is not necessarily drawn to the school because of the maritime theme. Lots of them come because it's the school in their neighborhood. And they come from failing schools."

Though her students' reading skills limit the water-themed books Jones can teach (Moby Dick isn't possible yet), she manages to create relevant lesson plans. For instance, her tenth graders chose a Waterkeeper group as part of a pen pal program. Eventually, the correspondence became part of a Web site that the kids created. For her ninth-grade class, she divided students into two teams, General Electric and the Waterkeeper Alliance, to debate who should clean up PCBs in the Hudson River.

By emphasizing a water-oriented curriculum, the Harbor School isn't necessarily trying to produce environmentalists, boat builders, or shrimpers per se. Instead, the school's educators aim to instill in their students the confidence and skills to navigate and achieve life goals, beginning with a college education.

Such an aspiration is a challenge at the school, where up to 90 percent of students in the inaugural class entered with reading and math skills below grade level. But so far, they have met their goals. On the New York State Regents Exams, 79 percent passed math A, and nearly that many aced living-environment science, global history, and geography. With this passage rate, Fisher anticipates that up to four-fifths of Harbor's first senior class will graduate in 2007 and, hopefully, go on to college.

At the end of that year, however, the school's New Visions grant ends. To fill this void, Fisher will lead stepped-up fundraising efforts.

"We're going to have an awesome day today," says Ann Fraioli as the students pack up for their Newtown Creek adventure. Fraioli, twenty-nine years old, typifies many Harbor School teachers. Most of the thirty teachers are in their twenties and thirties and hail from universities such as Yale, Michigan, and Barnard. They also boast maritime expertise, from a captain out of Vancouver to a Cape Cod lobsterman. 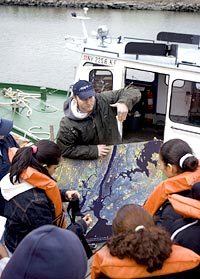 During the subway ride, student Alex Jones shares the course he's charting for his life with a clarity, maturity, and discipline far beyond his fifteen years. He explains that he saw an ad in the newspaper about the shortage of recruits for the New York Police Department's Harbor Unit and decided that is where he wants to work. For him, the Harbor School seems perfect. "I didn't have access to the harbor like this before," he says. "Lots of kids don't." On Saturday morning, Jones says, he'll get up around 5:30 so he can feed his cat before joining his Harbor School sail-certification class on a 34-foot sloop.

At the water's edge in the neighborhood of Greenpoint, groups of students rotate through three stations. One tests the quality of water, another writes entries in their field journals about Newtown Creek, and the third group boards the motorized scientific-research vessel the Big G. During the ride, Fraioli points out significant sites, including the large, egg-shaped domes of a sewage-treatment plant, and an array of ExxonMobil oil tanks, the site fifty years ago of the largest underground oil spill in any North American city. Students, meanwhile, point to CSOs (compliance sewage-overflow pipes), demonstrating the same zeal with which other teens might gawk at UFOs.

The attitude of excitement and level of engagement are impressive. Perhaps Fisher sums it up best: "Public education in New York is still not out of crisis mode. Combine that with environmental issues and it seems like we're right in the middle of the most important stuff going on. I wouldn't want to be anywhere else."

Go to "How to Keep a Maritime-Themed School Afloat."