A place of business, when the business is learning, can be a room, but it can also be a truck that transforms a room -- any room -- into a jungle/laboratory/art studio. Ask Chris Giorni, a.k.a. Mr. Science. Since founding Tree Frog Treks in 1999, he has traveled from school to school in northern California with an eye-popping trove of artifacts and a menagerie of mostly cold-blooded creatures. Once the kids fall for the likes of Ivana (a tortoise), Rosie (a tarantula), and Buddy (an iguana), they are ready for a committed relationship with all critters -- and their habitats. "The object is to expose children to nature in a positive way," says Giorni. "Our lives depend on it." 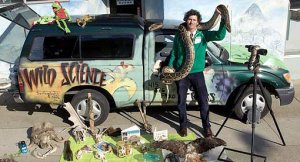 She came from a garage sale. She's a very sweet and gentle tortoise, a nice ambassador for us. If she continues to grow, she could get to be 100 pounds and live a hundred years or more. We've arranged to place her with a good children's petting zoo if that happens.

He is a prehensile-tailed skink; he uses the tail like a fifth hand. They come from the Solomon Islands, and they're endangered for a few reasons: They move very, very slowly, and the islanders consider them good eating. Since they don't breed until they are old, they don't bounce back quickly when they are harvested.

She's called Rosie because she's a Chilean rose-haired tarantula. Tarantulas are very docile, especially the girls. Males die soon after mating, often eaten by females, but the girls live longer, about twenty years. The focus you get from the kids when you pull out a tarantula is beyond words. They get so tuned in just trying to figure it out.

Tokay geckos have Velcro-like tips on their toes that make it possible to climb up glass. They can hang upside down on the roof of your tiki hut, no problem. All of our Tokays came from a garage sale one of our workers saw in the city. We told the seller about our program and he reevaluated what he was doing. He let them come into our educational world instead of hawking them on the street.

He is a native western toad who buried himself in a pot at a nursery and leaped out when the plant's buyer got home. That's become a big problem with nursery stock. We rarely keep natives, but frogs are a great segue to reptiles. Most people really dig them, and once they meet Clark, they want to shake hands with a lizard.

Isn't it beautiful? We found it on a trek along the Jago River, on the edge of the Arctic National Wildlife Refuge. I wrapped it in duct tape, put it in a box, and checked it as luggage. Unfortunately, global warming has caused a huge die-off of musk ox.

One of our first adoptions, Buddy is our diva. She's a fat and happy iguana who likes to be touched. She will go out on the program every day and be happy as a clam, as long as it's warm and sunny. She has never been aggressive. She's a sweetheart.

This Burmese python is a big female, about 14 feet. She's as sweet as a Labrador retriever because she was raised by thoughtful young man who would bathe her with a garden hose. When he joined the air force, his parents said, "We are out of our league." She's great with children. We tell them, "Be a stick or a stone and let Julie roam," and they let her crawl all over them. Most kids love her right away. She is so slow and mellow that they gravitate to her like bears to honey. She is often the one who turns a snake-phobic person around.