When Dave Lapp started teaching physics at Tamalpais High School, in Mill Valley, California, seventeen years ago, only about twenty-five kids took the class. There were tough prerequisites, and even tougher prejudices about the subject matter (totally irrelevant) and its devotees (total geeks). Extreme measures were called for, and Lapp is an extreme-measures kind of guy. Not only did he invite students to transform his room into a parallel universe of physics worship, he dropped nearly all prerequisites for the class. "Now, the only one is a sincere desire to take physics," he says.

Lapp also found a variety of loud, mysterious, and thrilling ways to illustrate subject matter. His habit of firing a gun into a block of wood suspended from the classroom ceiling as a way for the students to calculate bullet speed brought some uncomfortable notoriety last year. The onslaught of media was unanticipated "fun," he says, but the real payoff of what Lapp calls "extreme physics" has been avid student interest. "It has become a rite of passage at Tam to do physics as a senior," says Lapp. And not because it's easy. "It's hard work, because I don't water down the physics at all," he adds. His goal? "To show immediate application in life of what I teach in the classroom, so when their parents ask, 'What did you learn in physics today?' they will have an answer." 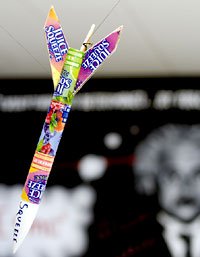 In the lab, students build rockets and use fairly sophisticated physics to predict the altitude they'll achieve. It's traditional to decorate your rocket. When they leave, I say, "If you aren't going to take that to college, you can leave it here." I've got about 200 rockets around the room. 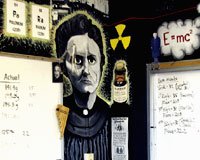 In 1996, I had an artistic group of students. I was seeking a way to change the look of my room and let them use their talents in a way that dovetails with physics. I charged them with painting a mural that portrays the lives of six physicists. I didn't ask for administration approval, because I was pretty sure they'd say no, so we did it over winter break -- eighteen kids working eight-hour days for four days. When the administrators saw it, they were shocked. But they loved it. Since then, probably sixty students have contributed over time. 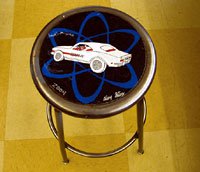 For anyone in my class who is artistic, if they want to leave their mark, I say "Sure." When they ask to paint a stool, I say, "OK." This one is by a guy who's at Stanford now. They are artifacts, a way to say you were here. Most are very personalized, almost like controlled graffiti. Sometimes, they leave a message for me. 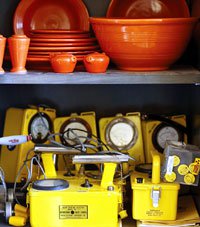 One way I teach about nuclear radiation is by asking, "Did you know that if you go into an antique store, or to Grandma's house, you are surrounded by radioactive stuff?" I use this Fiestaware to show that. It turns out that this particular glaze, the orange made in the early '30s from uranium oxide, is radioactive. I've been collecting it for years now. I could probably make thousands of dollars with all I've got! We use old civil-defense Geiger counters from the '60s to measure it. 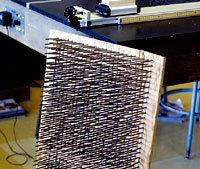 To illustrate Newton's first law of motion, about inertia, I have a student put a concrete cinder block on my abdomen and smash it with a sledgehammer. To add a little drama, they do it while I'm lying on a bed of nails with my shirt off. It's scary, but I try to choose someone who I hope has good aim.

Beauty in the Details

There isn't a portion of any wall in here that doesn't have expression on it. There's so much information and color that I have trouble keeping eye contact with kids for the first few days. But I like to think they become immersed in something wholly different than what is outside this classroom. There is nowhere they can look where they aren't confronted with what they are dealing with in this class. There is one stretch of about 30 feet that portrays the whole first semester. They don't get it at first, then, as they get things, they realize, "Hey, that's up there on the mural!"

I have them do a project in which they take photos of the physics they encounter, either naturally occurring or something they contrive. They are always saying, "I can't think of anything." So, one morning, I bent a fork with pliers, messed with it until it balanced on this nail, and set it out as an example of rotational equilibrium.