The Echo Park Film Center, in Los Angeles, is a bit like a dream clubhouse in a neighborhood where dreams and clubs are hard to come by. Founded five years ago by Paolo Davanzo and Lisa Marr, the volunteer-run film collective houses an impressive arsenal of filmmaking equipment, thousands of films, a small theater, artists in residence, and free classes to kids and seniors interested in making movies. In a tough neighborhood with few arts-education options for at-risk kids, the center reaches out, often through local public schools, allowing anyone who visits to take free classes, use valuable equipment, screen films, or just hang out. To stay afloat, the center also maintains a business where budding filmmakers with the means can rent state-of-the-art equipment and films for their own projects."I am a proud surrogate parent," says Davanzo of his students and their work."We show them love and passion, and they give it back, often in the form of really great, very smart films." 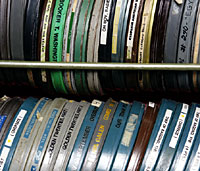 The Fat Guy and the Skinny Guy

We have about 2,000 titles, partly because it is important to have the physicality of film to see. A lot of these kids have never seen a camera or actual film, and when they see how it works, it is magical. We've got everything from kitschy '70s films to classics like Charlie Chaplin films. One sixteen-year-old here, he loves Laurel and Hardy -- he calls them the "films with the fat guy and the skinny guy."

This flatbed editing machine is traditional. When I went to film school sixteen years ago, they were all we had -- I would have drooled over this thing. Now, we have much more sophisticated tools. We use Apple equipment: G5s, six Apple workstations equipped with Final Cut Pro and DVD Studio Pro, and digital video cameras the kids can take out.

To make a very sad story very beautiful, my parents passed away when I was young, in my twenties. They were activists, devoted to saving the world, and I grew up with activist values. I wanted, when they were gone, to take that energy and give it to the community. With the center, I can combine my love of filmmaking, education, and activism under one roof. I used to be an elementary school teacher, and now I teach at the college level, but always with a progressive spirit. 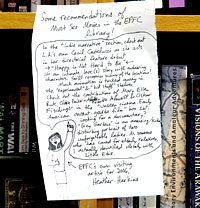 Our last artist in residence left this list of her "picks," her favorite films from our library, for everyone who comes through.

One Frame at a Time

This allows you to dissect a film, to see it for what it is, for the work, which can be humble and accessible. We are very free with our equipment, our films, all of our resources, but the kids must also take formal classes once a week. They have to enroll, even though it is free, and they can't miss a class. Beyond that, they can be here all the time, dissecting examining, editing, learning. 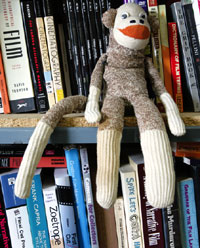 At the screenings, it's a mixed crowd, and we give the littlest ones the sock monkey to play with. This is a playful environment, humble and nonpretentious. We call it "la famiglia." Providing a home is part of what we do.

We use the old technology as a catalyst to the new. The sound of the old Super-8 projector, that clicking and glimmering and purring, is inspiring. You take the motivation and the excitement that comes from seeing something on that projector to the media lab, where you make something that requires new tools and fundamental skills -- job training for the future.