VIDEO: Collaborating to Compete: Teens Come Together to Put Robots Together 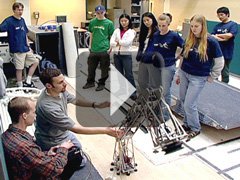 VIDEO: Collaborating to Compete: Teens Come Together to Put Robots Together

The noise is deafening. Everywhere you look there are teams of students -- cheering, strategizing, or tinkering with robots of every size, shape, and design. In the center of a huge arena, four teams are preparing to put their creations to the test. They'll have two minutes in which to maneuver their robots through an elaborate playing field that includes balancing on a teeter-totter, tossing balls into tall cylinders, and getting their robot across an end zone. Although the four teams have never met one another -- or seen each other's robots in action -- they're expected to work together, using the talents of each robot to earn the maximum number of points for all.

If it sounds complicated, it is. But for the tens of thousands of students who participate in the annual US FIRST Robotics Competition, it's also a whole lot of fun.

Started by engineer and inventor Dean Kamen, FIRST (For Inspiration and Recognition of Science and Technology) is all about inspiring and motivating students to become engaged in math, science, engineering, and technology. Each year, teams of students, teachers, and professional engineers respond to the FIRST challenge by designing and building a robot.

For students like Janet Tsai, participation in the FIRST program provides an up-close look at what life as an engineer is all about.

"The hands-on experience I gained from working on this project has just been absolutely phenomenal," says Tsai, a two-year veteran of the Poudre High Robotics Team, at Poudre High School, in Fort Collins, Colorado. "It's really neat the way the students design and fabricate the robot. It really shows you what you can do." Because of her participation in FIRST, says Tsai, she's now considering majoring in science or engineering when she gets to college.

Students participate in hours of role playing and strategizing in preparation for the big competition.

The regional and national competitions are the culmination of six intense weeks during which students, working with high school teachers and professional engineers, design and build a remote-control robot that can complete specific tasks and maneuver through a specially designed course. For the more than 500 teams that participated in the 2001 competition, the clock started ticking on January 6, when FIRST organizers announced the engineering challenge and distributed the parts kits that would provide the basic building blocks for each team's robot.

"Mentoring plays a big role in the process right from the start," says Lori Ragas, senior teams coordinator for FIRST. From the first brainstorming session to the last match at one of the regionals or the national competition, professional engineers work side-by-side with the high school students, explaining the functions of different parts, providing feedback on design options, and rolling up their sleeves to repair a faulty part or tinker with a design element.

For the Poudre High team, the first week and a half after the design challenge is devoted to what teacher and robotics coach Steve Sayers calls "pure strategy," where everyone -- from the first-year participant to the veteran team member; from parents to professional engineers, puts forth design ideas. From those best ideas comes a basic design, which the team will spend the next five weeks refining, fabricating, and testing on a prototype of the actual competition course.

Although much of the work revolves around design and engineering, robotics coach Sayers, who was a chemical engineer before making the switch to teaching, is quick to point out that a successful team requires an eclectic mix of students with a variety of skills and interests.

"If a student wants to be on the team, the first questions I ask them are, 'What do you enjoy doing? What are you good at?'" says Sayers, adding that there's "something for everyone" on the Poudre High robotics team. Students interested in computers do the programming or computer-aided design and animation work. Those with an artistic flair design everything from team T-shirts to flyers to the look and feel of the robot itself. Writers create the design documentation. The list of responsibilities, says Sayers, goes on and on. And no one job, he is quick to add, is more important than any other.

"Everyone is an equal part of the team," says Sayers. "We all just respect each other for the different roles we play."

In addition to providing hands-on science and engineering experience, the robotics program teaches students valuable lessons in cooperation and teamwork.

Respect. Cooperation. Learning to be a team player. These are just a few of the "life skills" students learn through the robotics program. They're skills, say team members and adult advisers alike, that students will carry with them -- whether or not they decide to pursue a career in science or engineering.

Mark Leon, NASA's robotics education project manager, has been working with high school robotics teams since 1998. NASA's reason for supporting robotics education (both financially and by providing mentors to schools throughout the country) is simple: "We need to build robots that are smarter, robots that can survive for long periods of time without being in communication with NASA," says Leon. "We're getting these students excited about robotics engineering, helping them to choose math and technology careers so they can contribute back to this country, so they can be part of the workforce that builds the next generation of robotic explorers."

But the benefits to students -- and to any future employers -- go well beyond the science and engineering skills students gain from participating in the program.

Just ask Tyson Wormus, a three-year veteran of the Poudre High team. "I've become a lot more confident through the work with this program," says the high school senior. "I can present ideas without many qualms, and I've learned to listen to other people's ideas."

For teammate Tsai, being part of the robotics program has meant learning how to be a team player.

"We're all working towards a common goal. And to get to that common goal, we all need to work together and listen to everyone's ideas," says Tsai. "You can't just remain contained in your own little bubble and hope that everyone else knows what's going on too."

In the 2001 competition, the commitment to teamwork paid off, with the Poudre High team winning the highly coveted engineering design award for Cam the Rambot, as the team's robot is affectionately called.