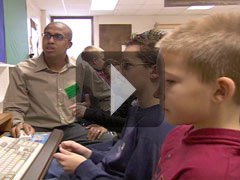 Teacher-to-be Jessica Ozimek is nervous. The graduate student at the University of Virginia's Curry School of Education is about to see how a class of hard-to-impress high school sophomores reacts to a Web site she created to teach Renaissance art. And as if she weren't under enough pressure, her university adviser and the world history teacher whose class she is instructing will both be watching.

"I want to impress the kids, impress Ms. Howerton [history teacher Julie Howerton], and impress my [Curry] teacher," Ozimek says just before heading into the class. "And I'm really hoping I say and do the right thing."

She needn't have worried. The budding Renaissance scholars even paid Ozimek compliments when Leonardo da Vinci's Mona Lisa suddenly popped onto their computer screens and when an interactive Web site about vanishing points proved to be fun and challenging. And both Elaine Bartley, Ozimek's technology mentor from Curry, and Howerton were more than encouraging.

Curry students practice teaching strategies in a variety of field experiences during their teacher preparation years.

Ozimek is a beneficiary of Curry's belief that plentiful practice in a real classroom is an essential requirement of high-quality teacher preparation. It is a sentiment she shares and one that led her to choose the education program at the handsome Thomas Jefferson-founded university in Charlottesville.

Curry overhauled its education program in the mid-1980s, anticipating two influential national reports that decried the inadequate preparation of teachers -- who were leaving the profession in droves -- and the education schools that were supposed to be preparing them. Curry replaced its four-year teacher program with a five-year program. It eliminated the education undergraduate major, demanded subject matter mastery as well as knowledge of education theory, provided mentors through the first three years of teaching, instituted use of cutting-edge technology, and put heavy emphasis on real classroom experience.

Then-Dean Jim Cooper had so much confidence in the new program he offered a guarantee. Virginia superintendents who weren't 100 percent satisfied with Curry graduates could call upon a Curry faculty member to come to the school and get the new teacher up to speed. "We never had to go out to a single school," Cooper says proudly.

Curry's education program starts early despite the absence of an undergraduate education major. University of Virginia students considering teaching take a class called Teaching as a Profession as sophomores to help them understand the nature of classroom work with students. If they decide teaching is for them, they add education courses to their classload, which includes a major in an academic discipline. Sophomores observe in classrooms, juniors tutor students one-on-one, and seniors develop lessons for different grade levels and take those lessons to real classes.

Fifth-year students spend the first semester in a classroom, shadowing and conferring with the classroom teacher, preparing and delivering lessons, and learning what it takes for a class to show academic progress. During the second semester, Curry students do a research project based on an issue that came up during their student teaching, and they prepare a portfolio that includes an online résumé.

For example, the students listen to a professor speak about a particular teaching strategy or philosophy. They go out to a school and see whether what they've been taught in class can be applied to what actually happens in a classroom. If they don't see the relevance or want more information, they can then go back to the professor and challenge what they've learned. "That kind of interchange, I think, keeps professors on their toes and makes sure that they're not talking about theory that doesn't have any application," he says.

Ozimek and others agree.

"There's only so much a textbook can teach you," Ozimek says, adding that mistakes provide the most powerful lessons. "You go, 'Okay, this is what I need to work on.' And at least you're finding out what you need to work on instead of just going in cold turkey when you get a teaching job and having to figure it all out then. It's nice to get a little preview."

"How much time do lawyers get and how much time do medical doctors get to work under supervision?" asks Virginia Coffey, a veteran teacher who opens her Charlottesville kindergarten classroom to would-be teachers from Curry. Coffey, a graduate of Curry before its program was revamped, says she wishes she had more classroom experience while still in college. "It's a very sink-or-swim profession, so I think it's valuable that Curry has chosen to put them in earlier and give them more exposure over a period of time," she says.

Sophomore Alexa Kane is learning about the importance of early exposure to a classroom. On one wintry day, the art history major watched as Coffey organized a class drawing and writing project based on a book the class had read. Kane sounded out letters with an earnest kindergartner. She read The Gingerbread Man to a group of enthralled students who eagerly joined in for the chorus: "Run, run, as fast as you can, you can't catch me, I'm the gingerbread man."

"Anytime you go into a classroom and just get a little more experience, you feel better the next time," Kane says. She adds that coming face-to-face with students in a classroom can be a sobering experience. Such "up in the clouds" goals as finding the uniqueness in each student get bumped against the realities of discipline, widely varying reading abilities, and looming standardized tests. "It's a lot harder than you think," she asserts.

Randy Bell, assistant professor of science education, says students come to his classes knowledgeable about science itself -- a result of the emphasis on subject-matter mastery -- but "they're pretty green when it comes to knowing how to teach that." Bell offers a combination of lectures, small-group discussions, and hands-on experiences accompanied by scientific demonstrations available on the Web that show his students how to make learning engaging. But it is the hands-on learning that seems to best capture his students' interest.

For a lesson on the Doppler Effect, Bell slips a battery-operated buzzer into a Nerf ball. The students throw the noisy orb to one another and, between giggles and Bell's one-liners, make observations about the change in the buzzer's tone. Bell then supplements the lesson with a Web-based representation of the phenomenon the students just heard.

For a lesson about moon phases, Bell hands out ping pong balls into which the students insert pencils. Their heads become the earth, a bright light is the sun, and the ping pong ball, which they hold straight in front of them, is the moon. In five minutes, half moon, gibbous moon and full moon are no longer fuzzy concepts. "I learned much faster by doing it this way," says one enthusiastic student who estimates that it would take six lectures for the same information to sink in.

Bell also uses technology at every opportunity, a hallmark of a Curry education. He is especially excited about an inexpensive microscope that hooks up to computers and opens an unseen world to students.

A Leader in Technology

A decision was made at Curry, which has received numerous awards for its technology innovation and its Center for Technology and Teacher Education, not only to include emerging technology tools in instruction but also to lead in their development. Team-teaching with professors at colleges thousands of miles away, PowerPoint® presentations by students and faculty, distance learning, electronic portfolios, and interactive collaborations and research are common elements of Curry programs.

"Our philosophy about using technology is that technology should be something that's not an add-on," states Joanne Herbert, assistant dean for admissions and student affairs at Curry and co-developer of CaseNEX. "It should allow you to do things that you couldn't normally do in a classroom. So it's not lots of bells and whistles. It's trying to use technology in such a way that you help people learn more effectively."

CaseNEX, a multimedia case study program developed at Curry, allows students to experience different classroom situations without actually being in the classroom. "We're talking about real life, and we're talking about it in real ways, and we're trying to understand what that is so that teachers will be better prepared to go out and teach," says Bob McNergney, Curry education professor and co-developer of CaseNEX.

For example, the largely white student body at Curry can get a clear idea of the issues involved in teaching at an inner-city school with large numbers of non-white or non-English speaking students through a case study of New York City's Newcomers High School. They get an added perspective when they do an Internet video hookup -- which they frequently do -- with teacher candidates at the predominantly African-American Hampton University on Chesapeake Bay.

Net-Frog, a highly acclaimed interactive frog dissection program that does away with formaldehyde, scalpels and squeamishness, was developed by Curry faculty members, first on videodisc and then online.

In the end, the goal of Curry's comprehensive program, including technology, subject-matter mastery, classroom experience, and mentoring, is to produce excellent teachers who want to stay in the profession. Ozimek is evidence the program is clearly on the right track. "When it goes right, it's so rewarding," she beams. "I just drive back from the school and I'm like, 'Yes! I really want to be a teacher.'"