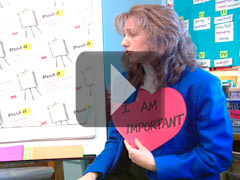 Editor's Note: Resolving Conflict Creatively Program (RCCP) co-founder Linda Lantieri is now director of the Inner Resilience Program and a program consultant with CASEL. (Read an Edutopia.org interview with Lantieri about defusing stress in children.) Teacher Sarah Button no longer teaches in the New York City Public Schools, but the RCCP is still in place at Patrick F. Daly School. More information about the RCCP can be found at the Educators for Social Responsibility website.

Holding a red paper heart inscribed with the words "I am important," teacher Sarah Button is telling a story to her class of engrossed fifth graders.

Each time she comes to a part of the story in which the protagonist, Maria, is on the receiving end of a deflating put-down ("Get up, lazyhead," "You gonna wear those old rags to school?" "What's up with that rat's nest on your head?"), Button tears away a part of the heart. Finally, just a small piece remains.

"How do you think Maria's feeling now if that's what's left of her heart?" Button asks the students, who sit quietly on a blue, green, and yellow rug that is also a map of the United States.

"She felt sad because she had a bad day and everybody kept on teasing her and making fun of her and saying bad things," answers one student.

"Can anybody relate to the kind of day that Maria had?" continues Button.

"When I went to my uncle's house, they looked at my clothes and started laughing," another student responds.

"How did that make you feel?"

Identifying feelings and recognizing the pain of negative comments are elements of a comprehensive effort at Brooklyn's PS 15 -- also known as Patrick F. Daly School -- to give kids the tools they need to become emotionally intelligent individuals able to move away from feelings and responses that prevent them from getting along with others, solving disputes peacefully, and concentrating on schoolwork.

The school sits in the midst of one of New York City's toughest and poorest neighborhoods, the same neighborhood where former principal Patrick F. Daly was killed in the crossfire of a drug-related gun battle in 1992. But inside the mural-covered, plant-filled building, where banners repeatedly remind students and teachers of the school motto, "Peace begins with me," children find a haven.

The heart lesson Button teaches is part of the curriculum of the Resolving Conflict Creatively Program (RCCP), an initiative of Educators for Social Responsibility, which started at Daly and two other New York City schools in 1985.

Straight from the Heart:

It has since expanded to more than 385 schools nationwide. The RCCP includes regular classroom instruction in violence prevention and social and emotional skills such as empathy, cooperation, negotiation, appropriate expression of feelings, and appreciation of diversity. It also includes professional development for teachers, staff, and administrators, as well as parent training and peer mediation.

Button had two hours of training a week for about six months in the program and then periodic staff development. RCCP mentors also came into the classroom occasionally to teach a lesson or observe and offer critiques. The time spent learning the RCCP was well worth it, Button says. "It's something I'll take with me wherever I go."

A class skit in Sarah Button's class shows how disagreements can be solved with civil discourse.

The instruction in social and emotional skills includes lessons both created by the RCCP and adapted from other programs. Popular with students, parents, and teachers are "I-messages," the brainchild of Parent Effectiveness Training author Thomas Gordon, which focus on a person's own feelings rather than the perceived deficiencies of the other person. (An example of an I-message is, "I feel sad when you play with Becky every recess because it makes me think you don't like me," rather than something like "You're horrible. and I hate you.") Such skills help prevent conflict from escalating to name calling and violence.

Other RCCP instruction can include role-playing and puppet shows that involve conflict and that engage students in finding peaceful solutions. For some teachers and principals, common language is the key. Phrases such as "anger thermometer," "win-win situation," and "conflict escalator" all relate to specific actions that can be taken to defuse heated disputes and find solutions acceptable to all parties.

The peer-mediation program allows students to serve as go-betweens when conflicts erupt in the schoolyard or elsewhere. Peer mediators are trained in such skills as active listening, which involves paraphrasing what a person has said, clarifying, reflecting, encouraging, and summarizing. The disputing students themselves ask for the mediation and agree to come to a settlement.

Patrick F. Daly School principal Mary Manti says her school has a different feeling because of its emphasis on peace.

A two-year study by Columbia University's National Center for Children in Poverty, which involved 5,000 students and 300 teachers, found that students taught about 25 RCCP lessons a year were less aggressive, chose more nonviolent solutions to disputes, and posted better scores on standardized tests than students not exposed to the curriculum.

"We found that an ounce of prevention is worth a pound of metal detectors," J. Lawrence Aber, leader of the study, has said. Less extensive but similar studies have borne out the New York evaluation, including one in Lincoln County, Oregon, and another in Atlanta.

Not an Either/Or Situation

Such findings, says RCCP cofounder and national director Linda Lantieri, a former New York City teacher and administrator, should help put to rest the idea that academics suffer when schools address a child's emotional needs. "We're finally learning that it is not an either/or situation," says Lantieri. "Feelings and learning and emotion are all very integral to each other."

Linda Lantieri, cofounder and national director of the RCCP, says programs like hers educate the heart as well as the mind.

Though the absence of physical fights is one testament to social and emotional learning at Daly, Principal Mary Manti says the less easily defined ambience of the school is different, too. "Everyone mentions the tone of this building or the spirit of this building," Manti says. "So, it's not something that people who are here just notice and live by. It's something everyone seems to feel as soon as they walk in."

But the educators also can point to specific cases of success. Button says she recalls a boy who "would fight with anything, from a sock to a person." But regular social and emotional instruction coupled with special attention from caring teachers and the guidance counselor have turned him around. He has taught I-messages to his brothers and sisters and admonishes them not to hide their feelings. He has few outbursts, but when he does, his teachers are there to remind him of the skills he has at his disposal.

Parent Gwendolyn Clark, who took the RCCP peer-mediation training herself so she could help out at the school, says the mediation has stopped many fights. Personally, she adds, she has picked up some tips she uses at home.

All the way across the country, in the rural Lincoln County Public Schools, in Oregon, Principal Sandi Williams recalled a boy whose only emotion was anger until he started using some of the RCCP skills both taught to him in class and reinforced regularly by teachers and staff when teachable moments presented themselves. He was perpetually "beet red and ready to haul off and slug somebody," says Williams, principal of Sam Case Elementary School, in Newport.

By the end of the school year, he was able to express his disappointment in a calm, factual manner. If he had not learned the RCCP lessons, Williams says, "he would have been suspended numerous times, he would not have been able to be in band, where self-control and teamwork are necessary, he would have been seen by his peers as a scary kid to be around, and he wouldn't have had many friends." As it is, he is popular with classmates, is actively involved and enjoys school, turns in his homework, and has higher grades. "I think the program saved him," Williams says.

"The misbehavior of new students stands out at our school," echoes Jo Rauch, Case's physical education teacher. The RCCP is taught weekly in the classrooms and is ongoing in P.E. classes. Misbehavior that may be common elsewhere, from dishing out insults to complaining about being paired with the "wrong" person, "just doesn't happen at our school," Rauch says.

As national RCCP director, Lantieri sees success stories around the country. "I know we're equipping students to deal with all of what they're going to have to deal with in the 21st century," she says. " We know enough from the research and from what employers tell us that we need the people skills and the team-building skills and the communication skills and the managing-emotions skills as much as we need all of those other, more intellectual capacities.

"We are talking about a whole new vision of education," she adds, "that says that educating the heart is as important as educating the mind."