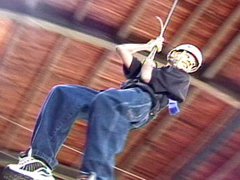 Walk down a corridor at Wilbur Cross High School in New Haven, Connecticut, and ask a passing student about the "stoplight" exercise. More often than not, a smile of recognition will be the answer. "Oh yeah," the teen will say, "Stop. Calm down. Think. Go."

It's no accident that the drill (red for stop and calm down; yellow for think about the problem and its solution; and green for go with a plan of action) is on the tip of students' tongues. They have been practicing it since kindergarten. The exercise is a recurring element of a comprehensive, districtwide attempt to produce emotionally intelligent students who know how to control impulses and anger, solve problems without resorting to violence, cooperate, behave in class, be self-motivated, and, ultimately, excel in school.

First graders at Truman Elementary School do breathing exercises that help them calm down.

New Haven is an inner-city school district where nearly a third of the children live below the federal poverty level and where gang warfare, drug problems, racial strife, and violence are all too common. The district, which had already moved to a model of reform by adopting James Comer's School Development Program, is unusual in making social development as much a part of the curriculum as math or science, and in creating a district-level department to oversee social skills instruction in the forty-six elementary, middle, and high schools.

A look at the curriculum guide on New Haven's Web site demonstrates district administrators' commitment. First graders "will write stories" in language arts, "will learn about living and non-living things" in science, and "will learn ways to calm down" in social development. Sixth graders learn to "summarize and analyze texts" in language arts, "describe, model, and classify geometric shapes" in mathematics, and "practice peer pressure resistance skills" in social development.

"You have to practice it each day like you practice math skills," says Dee Speese-Linehan, supervisor of the district's Social Development Department. "Without that constant reinforcement, you don't improve. It's the improvement in those social emotional skills for each individual that makes students more available for learning in other subject areas." She adds that home and community-related programs like the district's Grandparents Raising Grandchildren project and partnerships with community police officers also contribute to the crucial reinforcement.

On a recent winter afternoon, Truman Elementary School teacher Merriellen Berrios-Gunn used exercises from a program called Project Charlie and asked her class of first graders to ponder "what-ifs." What if a stranger offered you ice cream in the park? What if your best friend wouldn't let you play with a toy? What if you got pushed out of line in the cafeteria? What if your brand new markers disappeared from your desk?

The earnest, pint-sized thinkers came up with responses aimed at being assertive while avoiding conflict or danger. They frequently referred to their "magic bubbles," imaginary spaces that they set around themselves to avoid entering other people's personal space. They practiced breathing exercises designed to help them calm down, and they identified the feeling associated with a frown or a smile or a red face.

"Kids need to know themselves," says Truman Principal Lisette Bernier-McGowan. "They need to know why they act. Then they can learn self-control and learn how to behave in class, which in turn advances learning."

Elementary school teachers get an initial ten hours of training in Project Charlie and then receive regular follow-up training, either through after-school refresher classes or in-class coaching. Berrios-Gunn says the training more than makes up for the time it takes. "I don't have to worry about behavior problems in my classroom," she says. "And when the children are not focused on resolving issues with violence, they concentrate more on academics."

Computerized dolls and a program called “Baby Think It Over” are used to give students at Cross High School a taste of parenthood.

On the other side of town at Cross High School, teacher Sean Woodard, who could be mistaken for one of his students if not for his shirt and tie and friendly but firm authority, guided his freshman social development class through a discussion on overpaid athletes, school reform, the Hip Hop culture and whether it's realistic to think students can resist peer pressure to have sex and use drugs. (It's difficult but realistic, they decided.)

He led a three-minute meditation in which the students stared at a dot, took deep breaths, and repeated their common mantra, "I'm as great as I can be." Later, one of the students shared how she had used the stoplight exercise to avoid hitting an opposing player who had deliberately bumped into her at a basketball game the previous night. "I just calmed down and kept my head in the game," she explains. "That is excellent to do that," Woodard responds.

Students bring a lot of "baggage" from their non-school world "that cansometimes supersede your lesson," he says. "So if students are learning how to deal with emotional difficulties, it's going to make forbetter classroom learning in every single subject."

The Cross social development program also includes a "senior buddies" project, in which a group of freshmen is paired with a group of seniors. "We feel if they can bond to at least one adult and to other students, they'll have a better chance to stay in school," explains Joyce DiDia, who oversees New Haven's high school social development program. "They just want a reason to stay in school."

A national program called "Baby Think It Over" is also part of Cross' social development mix. Freshman students take a computerized baby home for a weekend. The baby is electronically programmed to cry when it senses neglect or mistreatment, such as being dropped or ignored for too long a period.

The social development curriculum in New Haven has had both successes and failures, but its success greatly derives from regular reassessments and refinements. The high school program was dropped for six years because teachers were less than enthusiastic about it, mainly, district officials say, because the teachers did not receive the necessary professional development. District leaders aren't making that mistake again, and the program is being incrementally reintroduced in the high school grades as teachers receive social development education themselves.

But school officials also like to point to results of the Social and Health Assessment, administered every two years by the district and the Yale University Child Study Center. Compared to 1992, when the first evaluation was made, in 1998 fewer students were carrying weapons to school, witnessing violent acts, or reporting being victims of violence. More report feeling hopeful. The number of students who went on to postsecondary education rose to 75 percent, and dropout rates decreased to 9.4 percent. In addition, youth sex, drug use, drinking, and smoking declined. On the academic front, both SAT scores and the Connecticut Mastery Test scores improved, and the district is in the process of determining the link between the socialization classes and academic progress.

"You don't just teach desks and chairs," sums up Cross teacher Woodard. "You teach people. Every class has to have some social development."