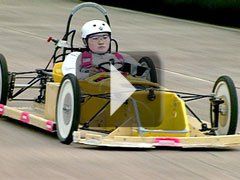 "It builds a better workforce for us," says Ralph Dobson, senior technical services engineer at the electric company. "What we're trying to do is get students to understand more about electricity and what it's like to work as a project team." The work doesn't involve "just the fun part" of getting ready for a race, he adds. The students do write-ups of their design, budgets, schedules, and work. "It's just like a real job. The boss gives you so much to spend, and that's all you can spend."

Students from West Hawaii Explorations Academy, Hawaii's first charter public high school, have competed in the race for four years -- first as a school within a larger school in Kona on the Big Island and then as a separate institution headquartered on the grounds of the Natural Energy Laboratory of Hawaii. In fact, the students' enthusiasm for the interdisciplinary electric car race and a previous solar-car competition gave WHEA founder Bill Woerner the idea of starting a school devoted to project-based learning.

The Team to Beat

In 2001, WHEA students were returning to the race as the team to beat. The school's team won the state championship in 2000, even with the handicap of making its own parts because of the limited stock in local hardware stores. Students built the frame out of rejected carbon-fiber sailboard masts, cut and welded pedals and T-joints, designed and built the steering system, and lashed aluminum rods together to build the car's canopy.

The 2001 car -- futuristically sleek, snug, and covered with an ironed-on fabric that took seven coats of bright red paint -- was the result of months of work under the guidance of Bill McKown, a retired director of research and development at General Mills and a volunteer mentor at WHEA. Like other teams, WHEA's received a basic kit from the Hawaii Electric Company that included a motor, a controller, a potentiometer, an emergency disconnect switch, a fuse, a contact, gears, a steering kit, and a brake kit.

The students buy their own batteries -- two 12-volt batteries, in WHEA's case -- and put the car together. The work requires a range of academic applications. Students do math equations. They study electricity, aerodynamics, and the effect of weight and strength on car performance. But the student work doesn't stop there. Extensive documentation is required of the design and building process, the business and community contacts, and money raised and spent. Total spending for the car is limited to $2,500. An oral presentation also is required based on questions picked at random, and students create a Web site.

Throughout, the young builders are doing what people in the real world do -- bouncing ideas off one another, researching, trying proposals that sound good, failing occasionally, and then coming up with alternatives. Vehicles are judged on design, construction, safety, appearance, aerodynamic design, and use of recycled materials.

McKown says he believes the main benefit -- aside from the fact that students will remember what they're learning because they're using that knowledge in a practical way -- is that it gives them experience in completing a job on time. "A lot of people emerge into adulthood and have never had to complete a multidisciplinary project on time with all the uncertainties of making a device work," says McKown. "Putting things together often requires a type of disciplined thinking that gives instant feedback on whether you can follow through to complete a job in a timely way."

The car that completes the most laps wins. In 2001, that wasn't to be for WHEA's team. The car had some brake problems, and the school came in fourth. But the team vowed to return.