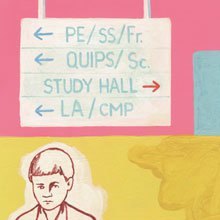 An exasperated parent, twenty minutes into a meeting about her failing son, cried, "Why doesn't he have any study halls?" For a year and a half, she had looked at her son's high school class schedule and wondered why he had no time in school to focus on his assignments with the help of his teachers. In fact, he had four study halls each week, but they were called QUIPS.

The acronym stands for Quiet Uninterrupted Independent Productive Study, five words that provide a depth of pedagogical reasoning. But because the full title is a mouthful, an acronym is used, and, consequently, none of the fancy subtext gets to the parent. This particular mom had assumed QUIPS was a subject that had been added since she had been a student. It did not help that the boy's schedule, as written, also included LA, PE, Fr., SS, Sc, and CMP. Oh, and another LA.

In his futuristic novel 1984, George Orwell introduced Newspeak, a language designed, as he put it, "to make all other modes of thought impossible." Teachers and school administrators, wishing to impose new modes of learning, have lapsed into an educational dialect of the fictional tongue. Though Orwell's Newspeak neologists had diabolical goals in mind, educators employ their jargon in good faith; they create new words for new ideas as they attempt to shed the methodology and pedagogy of the past. The results, however, can engender confusion and suspicion, just as in Orwell's frightening tome.

Education's acronyms, pseudonyms, and clever names too often keep parents in the dark and give schools a reputation for gimmicks over quality education. More importantly, these terms and strings of letters don't necessarily have real meaning -- or at least they don't seem to mean what we think they mean.

Consider the QUIPS-versus-study-hall concept. Many students whose class schedules list the acronym do not understand the profundity of the full title; most don't seem to be aware that the letters stand for anything. Only a few curious souls ask, and others like to mock the first element when a peer is too noisy: "Jason, the Q is for quiet!"

But the term "study hall" is not entirely accurate. Such a program is rarely held in a hall, and, most often, too little studying occurs. Few public schools even have halls in the original sense of the word. Yet the term, which has private school origins, hangs on because it is familiar, it emphasizes study, and it symbolizes the academic excellence those schools are perceived to represent.

The very basic phrase "study time," or "study period," might be more accurate. It is not endowed with the directives present in Quiet Uninterrupted Independent Productive Study, but it beats DYMH (Do Your Math Homework), and the word study respects the image of noses to the grindstone -- an important concept for parents.

Unfortunately, even educators willing to get rid of acronyms in the struggle to compromise between edubabble and accuracy may still fall victim to another common form of miscommunication: the clever pseudonym.

For example, one of our local schools has "guided studies" instead of study hall. The theory behind the name is that students are placed with someone from the department in which they need the most help. In reality, students end up in guided-studies sections that fit their schedules, not ones that meet their needs. As a result, teachers assigned to these sections correct papers or read the paper during that period.

Unlike acronyms, pseudonyms misdirect through the misuse of words. They can be downright dishonest, and, yet, pseudonyms abound in education. In the case of the phrase "guided studies," it is likely the new policy was thought to need a new, more accurate name. When the practice failed, and the class reverted to the traditional study hall format, the name, a misleading relic, remained.

Why do we insist on rechristening programs that retain their core essence? Why must we assign longer, snootier, and potentially confusing titles to classes or programs or policies, only to reduce those titles to meaningless acronyms? The teaching of English has changed in many ways, but students are still mostly reading and writing. Do you improve the quality of the instruction by changing the name to language arts? Probably not. Teachers and administrators, by nature sticklers for clarity in communication, need to rein in the impulse to change the names of things, and should focus instead on their content.

Tom Darling has been teaching for ten years and writing for twenty in Hinesburg, Vermont. Write darling@hcsvt.org.