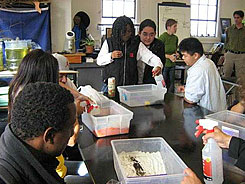 Thursday, November 8, 2007, was not a typical day at the Crissy Field Center. The day before, a tanker had hit the base of one of the towers of the San Francisco-Oakland Bay Bridge and spilled 58,000 gallons of bunker fuel, a noxious form of oil. By the following morning, police barricades and caution tape blocked off access to the beach. Yellow "booms" crisscrossed the sands to keep oil from washing up, and "No Swimming" signs dotted the typically idyllic walkway that runs from the city's bustling Marina District out to the pastoral restored shoreline that parallels the urban national park known as the Presidio.

The kids in the Crissy Field Center's blue-and-green-walled multimedia lab are anxious. "What do we do now?" asks a boy, slouched in a black sweatshirt.

"Are we still going to get to go outside?" a girl asks in between sending text messages on her cell phone.

The teachers are a little worried, too. They've had just a few hours to prepare today's alternate lesson. It turns out, though, that the oil spill fits right into the curriculum for high school educator Lisa Franzen's fourteen students, who come to the Crissy Field Center for two hours and forty minutes of environmental science once a week as part of a program called Project WISE (Watersheds Inspiring Student Education).

What We Learn from Disaster

These students aren't nature kids. They come from some of the most urban neighborhoods of the Bay Area. "We've got kids coming from the Bayview, the Fillmore, the East Bay, the Tenderloin -- some of these kids are busing in for an hour and a half to get here," says Charity Maybury, a scientist and teacher and the center's senior specialist. But since the school year started, these city kids have been learning about biology, ecology, conservation, and botany and, more than that, have gained a love of the outdoors. As Maybury puts it, "Part of the goal is to get them out of their zone that they're used to and get them thinking about nature -- and realizing that there's nature in their neighborhood as well."

The day after the oil spill, the students are clearly worried about what state that outdoors will be in. They move into the Urban Ecology Lab, a high-ceilinged room scattered with lab equipment and with aquarium tanks containing live turtles, and the kids sit down at two long tables. Maybury places two bowls in front of them: one containing clean water, the other filled with water and vegetable oil. Then the teachers pass around white downy feathers.

The experiment is to predict what will happen to these feathers when dunked in the clear water and what will happen to them in the oily water. Most of the kids theorize that the feathers will float in the clear water and sink in the oily solution. It turns out they float in both, but though the feathers dunked in the first bowl emerge unchanged, those placed in the oily water wither dramatically, their barbules collapsed. The tie-in to the possible effects of the oil spill is clear: A bird with oil-covered feathers would clearly not be buoyant or able to get airborne.

"Are we going to see birds like this in the marsh?" asks Amy, whose large gold earrings spell out her first name in fancy script. "What if we find a bird that needs help?"

Maybury explains that specialists are on call who know how to clean distressed birds safely, and the kids get ready to head outside, equipped with cameras, global-positioning-system (GPS) equipment, and observation sheets. The salt marsh just across the street from the center has become a haven for 17 fish species and 135 types of birds, including herons, egrets, ducks, and gulls, since it was restored in 2000. Oil booms surround it, and though its waters look mostly clear, some rainbow-hued oily patches are evident.

The kids take pictures of these spots and frown, but the bright fall sky and the wildlife seem to reassure them. "Look! There's a sea lion!" someone shouts. And everyone within earshot turns to see. Much to everyone's relief, it frolics offshore, looking spry and healthy.

Day-to-Day at the Crissy Field Center

The U.S. National Park Service has long been dedicated to education and interpretation, offering teachers curricula and providing learning opportunities for kids. The Crissy Field Center, which opened in 2001, has taken this idea a step further, getting kids involved in conservation, archeology, botany, history, and leadership through hands-on classes that use the natural resources of the Presidio and high tech tools.

The center houses a multimedia lab, a resource library, a science lab, a teaching kitchen, an arts workshop, a café, and a bookstore. In the past six years, more than 400,000 students have taken advantage of its programs.

Located in an old military commissary that's been sustainably renovated, the center is a public facility operated by a partnership between the Golden Gate National Parks Conservancy and the National Park Service. One of the most popular programs for children in grades 1-9 is the summer day camp, held at the only campground within San Francisco city limits. The center also offers day trips such as canoeing with an ecologist to an island in the bay, along with two-night backpacking trips designed to introduce middle school students to environmental issues and teamwork.

Lisa Franzen's class is part of a longer-term project. The center has partnered with two schools -- the Galileo Academy of Science and Technology and Gateway High School -- to engage high school students in Project WISE, a study of the Presidio's watershed.

The class's goal is to get kids "interested in the process of scientific inquiry," says teacher Doug Kern. "They learn how to collect data, document it, and analyze it, and after a year of doing that, they have a lot of experience in running experiments outside." At the end of the year, the kids present the data they've collected about the watershed to park officials and the public at an environmental symposium. They use high tech tools, including Google Earth, GPS, iPods, spreadsheets, and an interactive whiteboard.

In learning about how the watershed works, the students also come to value it and to see nature as a place of solace. "Partly, it's nature as a refuge -- a safe zone," Maybury explains. "At first, they don't feel that way. They think it's scary being out there. But then they come to love it, and we really see a difference in them. I've seen kids walking around out here in the summer -- they've come out for a visit on their own. They miss it."

"Just the experience of being outside and of realizing they're OK if they're hot or cold is something they have to learn," Kerns adds. "Yesterday, out in the marsh, it was cold! But the kids were still very engaged, and they tend to become very proud of the experiences that were the wettest or the coldest. They bond over them, and later it's a story they can tell: 'We survived that!'"

The beach in front of Crissy Field reopened on November 17. It's too soon to tell if the oil spill will be another survival story for the ecosystem, but it's certainly been a learning experience for the Crissy Field Center kids. As one of them asked, "How are you going to clean all this up?"

Traci Vogel is a freelance writer based in San Francisco.