Credit: Courtesy of Cody Groat
Table of Organization: Sacramento New Technology High School students work in teams to support a candidate or a proposition during the 2008 presidential election. 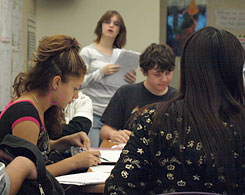 Credit: Courtesy of Cody Groat
Table of Organization: Sacramento New Technology High School students work in teams to support a candidate or a proposition during the 2008 presidential election.

Staring intently at a computer screen in their Political Studies class, a combination English, economics, and government course at Sacramento New Technology High School, in Sacramento, California, seniors Nancy Vue, Sparkle Shamburger, and Christian Govea scroll through a "project charter." Teachers and students jointly created this document, or one similar to it, which forms a contract among students for every project at this school and at New Technology Foundation schools around the country.

The document describes the next assignment they'll be tackling as a group: in this instance, creating a newsletter about the current economic crisis. The page details everything -- from the project's objective to the deliverables to the expectations that the group members have for one another.

At Sacramento New Tech, as well as the other 42 mostly public schools in the network, educators teach the entire curriculum through project learning, and every project uses a similar document -- not only as one of the starting points for each unit but also as a tool for creating accountability and managing group dynamics. And although the structure of the project charter or its equivalent is always the same, the contents are specific to the project.

"We print it out and sign it to make sure everyone agrees," Vue says of the charter. "If someone doesn't do her work, we can say, 'You signed the contract.'" (Eventually, both the teacher and team members grade all the students on their collaboration skills. As a last resort, the group can decide to "fire" one of the team members, who must then complete the project independently.)

Starting with the Teachers

Getting students to work cooperatively in groups isn't always an easy task -- particularly when they aren't used to it and when they have concerns about how they'll be graded as a group rather than as individuals. Michael McDowell, who trains teachers on managing group dynamics through the New Technology Foundation, a ten-year-old nonprofit organization that helps communities replicate the New Tech model nationwide, says teamwork is one of the greatest challenges project-learning teachers face.

"We've heard several times over the past few years that nothing is more cognitively and physically taxing in the project-learning environment than managing student work groups," McDowell writes in "Leading Student Work Groups in the 21st Century," an in-progress article that discusses the tools, best practices, and scholarly strategies for student work groups in the project-learning environment. What's more, according to a survey of 266 teachers McDowell conducted, more than half had less than two days of training on managing work groups.

And yet, because collaboration is the linchpin of project learning, managing the delicate ecosystem of student groups is crucial to an effective project-learning classroom, experts say. McDowell, who wrote his doctoral dissertation on the topic, likes to explain the challenges and benefits of group work by quoting management expert Edward Lawler, of the University of Southern California's Marshall School of Business: Groups, Lawler says, "are the Ferraris of work design. They are high performance but high maintenance and expensive."

Getting to Know (and Trust) You

At Sacramento New Tech, every freshman takes Peter Newman and Christine Coit's team-taught English-geography class. Because most first-year students have little experience in group work, Newman and Coit must instill in them what the school refers to as power skills: the abilities, such as communication, collaboration, time management, and organization, students need in order to participate effectively in a project-learning environment -- or in any group, the teachers say.

"The biggest mistake people make when they put kids into groups is that they don't give them proper training on how to work together," says Newman, who teaches geography. "If you provide them with the skills to communicate, ask one another questions, and use their peers as resources, they learn much more."

An important first step to creating solid group dynamics is to help students get to know one another, says Coit, who teaches English. "You can't work with others if you don't know and trust them," she adds. As a result, Newman and Coit start the year off by doing a number of team-building and icebreaking activities.

Providing the structure for effective group collaboration is also important, Coit and Newman say. In the Sacramento New Tech model, units begin with an entry document that describes the project basics, followed by a project charter and a project-management plan. "We go through the charter as a class and talk about what it is that we're creating. Then we list the process the students will go through, in order to get everyone on the same page," explains Coit. "The project-management plan requires a similar process, but it's between the group members; they talk about what they're creating, how they're going to do it, and what their individual roles will be."

Each student then volunteers to take on a specific leadership role, such as being the group scribe (who is responsible for taking notes and paperwork), the marshal (who keeps the team on schedule), and the liaison (who interacts with the teachers on the group's behalf). Coit and Newman also recommend setting aside class time every day for students to discuss what they've accomplished and what they plan to work on the next day.

The New Tech Foundation's Michael McDowell notes that the start of each project -- when students form new groups -- is the ideal time for team members to establish agreed-on group norms for decision making and communicating with one another, and the consequences of violating those norms, which makes it easier for both the students and teacher to manage the group process if it veers off track. In the New Tech model, each project starts with an entry document and then uses documents akin to Sacramento New Tech's project charter and its project-management plan.

According to McDowell, writing the norms into these documents provides an entry point for teachers to help manage healthy group dynamics. He notes, "I can go into a group and say, 'I have an observation. I'm wondering if someone violated a norm.'"

Designing projects and clearly providing systems that avoid a divide-and-conquer tactic (in which students simply divvy up the work instead of actually collaborating) is another important strategy, project-learning veterans say. "We build projects that require a lot of discussion," Newman points out. "And we also ask students to discuss really simple, basic things, such as which fonts they're going to use in their presentations. It seems elementary, but the ability for them to talk about what the final product is going to look like is a huge step. Part of the collaborative process is the ability to create a cohesive product, one that looks like one person made it."

But in order for true collaboration to happen, students must be able to communicate diplomatically, a skill that often requires explicit training. A good rule of thumb, McDowell says, is to convey to students that when someone wants to make a point to a team member, he or she should do the following: "State the facts, tell your story, and encourage the other person to tell you his story."

New Tech teachers say that with a little help, students can develop the communication and collaboration skills needed to manage themselves in groups, skills they can then take with them to the college and work worlds. "These kids are getting exposed to the fact that you have to communicate and that you don't get anything done without talking to others," Coit says.

Skills for the Real World

Student Christian Govea says that when he first arrived at Sacramento New Tech as a freshman four years ago, group work took a little getting used to, but he's since discovered the art of compromise. "I've learned to deal with people," he says of group work. "You have to try to do things that benefit everyone in the group so you can get more done."

He says the " A-ha!" moment -- when he came to understand how to collaborate and communicate -- happened his sophomore year. One student in his group wasn't doing his work, which was making Govea increasingly frustrated. The group met with the teacher, who was eventually able to resolve the situation through a mediation-type meeting.

Afterward, the teacher gently pulled Govea aside. "She told me that next time, I should try to work things out with people -- talk about it instead of getting mad and confrontational," Govea recalls. "Before, I'd say, 'You're not doing anything!' Now, I'll say something like, 'What do you need? How is it that you do things, just so I know?' It's really helpful. You can take a lot of stuff you learn here and use it in your everyday life, and you may not even realize it."

Bernice Yeung, a contributing editor and writer for Edutopia, is a freelance writer in San Francisco whose work has appeared in the New York Times, the Village Voice, and San Francisco magazine.