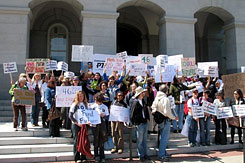 Many teachers who use project learning (also known as project-based learning, or PBL), say they'd never go back. But in the three years Kerry Rice, an assistant professor at Boise State University, has taught a master's-degree course on the subject, she's heard nearly every complaint in the book about why project learning is simply too hard to pull off.

"The biggest concern revolves around the implications for high-stakes testing," Rice says. "Teachers ask, 'Will my students perform as well on standardized tests if I incorporate PBL?'"

Teachers aren't only concerned about whether project learning can meet state and federal standards. In fact, some educators have a name for all the questions and concerns that teachers and administrators have about it. They call them the "Yeah, Buts." The Buck Institute for Education (BIE) will begin to respond to these sorts of issues this fall through the PBL Starter Kit, the first in a series of books it is publishing on project learning.

Below, you'll find a few responses to the most commonly heard "Yeah, Buts."

The BIE has long addressed standards-based concerns through the PBL Co-Laboratory, its resource for free online project-learning project plans (registration required). These plans conform to national standards, and they show teachers and schools how to develop their own hands-on plans. (The institute's Project Based Learning Online Web site was supported in part by The George Lucas Educational Foundation.)

The PBL Starter Kit includes five detailed spotlight projects that illustrate how teachers have incorporated standards into their project-learning lessons. For example, Kristine Kurpiewski, who teaches introductory science at Chicago's Aspira Early College High School, came up with an idea for a project while looking at the quality and safety claims on product labels at the grocery store. Her idea was to teach her students the scientific method by having them, as a group, act as an independent product-testing laboratory.

The first thing she did after coming up with the idea was to turn to the Illinois Learning Standards, where she quickly found a group of science standards -- conducting controlled experiments, collecting and organizing data, formulating alternative hypotheses, defending conclusions to an audience -- that became the focus of her project.

According to the book, the project exceeded Kurpiewski's expectations. "At first, I was concerned about spending three weeks on this project, but when I look back, I realize how much my students learned and how much time I saved by not having to reteach the same thing over and over again," she says in the book. "I realize how important it was to take my time and do this right."

As it was for Kurpiewski, a common concern among teachers is that project learning will simply take up too much time, both in terms of planning the projects and in executing them. "The concern I hear about the most deals with the time needed to plan and gather things to make PBL work," affirms Susan Moon, a fifth-grade teacher at West Pelzer Elementary School, in West Pelzer, South Carolina, who has used project-learning lessons in her classroom. "I have told teachers in the past that once you plan a major lesson and gather things, it's not nearly as time consuming the next time. And the process itself, as the students grow into it, becomes less cumbersome anyway."

Experts acknowledge that project learning does involve more planning, so they suggest turning to a growing body of online project libraries. There, teachers can find existing projects and modify them. Rody Boonchouy, of the project-learning consultancy Novel Approach PBL, adds that carving out time to collaboratively plan projects during professional-development sessions has been a boon to many schools. "This allows teachers to get together once or twice a month with the objective of designing curriculum and projects rather than focusing on more administrative things," he says. "It's important to set aside that time for PBL."

West Virginia is one of the first states in the country to try to implement project learning in every classroom. Carla Williamson, executive director for the state's Office of Instruction, says West Virginia has good reasons to move forward with project learning, despite the increased time commitment. "Project learning can require more time, but it's time well spent, because the students are really taking ownership of their learning, and the end result is that their learning is so much deeper," she explains. "That's something they carry with them for the rest of their life."

Are My Students Ready to Collaborate?

Some teaches are reluctant to use hands-on projects because they have concerns about whether their students are up to the task of collaborating in the classroom. "Across the board, from rural to urban schools, from the East Coast to the Midwest to the West Coast, teachers think that their kids are not ready for PBL because of its focus on group work. But no one is born with a PBL gene," says David Ross, director of professional development at the Buck Institute for Education. (Ross's experiences as a project-learning teacher are featured in the PBL Starter Kit.)

Adds Boise State's Kerry Rice, "Time and time again, I see comments regarding students who might be unwilling or unable to work cooperatively with others to accomplish a goal. It takes time, effort, and guidance to develop a system in which all students can work together in mutually beneficial ways. This applies not just to students but to teachers as well."

Indeed, directing students toward collaboration requires some preparation, just as it would for adults. "It's a mistake to expect students to be able to function collaboratively the first time around; most adults can't do it, so why would you expect students to communicate and deal with conflicts?" notes Rody Boonchouy. He recommends using a series of team-building exercises from his company's Web site at the beginning of the project. These exercises will teach the students be attentive to one another's needs, be more communicative, and think about the consequences of their words before they speak.

The PBL Starter Kit discusses ways to hold students accountable during group work through preproject discussions and close monitoring by teachers. In addition, it includes a number of strategies for breaking students into groups -- for example, four is the ideal number for a group, and never pair students with their friends. The book also talks about how to evaluate students on group projects in a manner that's equitable and fair. For instance, instead of giving one group grade, include a mix of individually earned scores. This strategy, according to the book, will "save you from arguing about 'why my grade is based on what other people did.'"

Won't I Lose Control of My Classroom?

It's true that project learning involves inquiry-based learning, which requires a teaching style that is different from the traditional teacher-lecture approach. This shift can be discomforting, and experts have described the change as the difference between controlling the classroom and commanding it. "Control and command are not the same thing," Ross says. "With PBL, you give up control, but you always retain command of your classroom."

Boonchouy agrees. "In PBL, there is a significant professional transition that takes place from a managerial role to one that is more coach or mentor," he says. "It's important that we share these concerns and point out that yes, it is going to feel uncomfortable."

Matthew Best, a veteran teacher who is now the principal of Leonardo da Vinci High School, in Davis, California, says he can relate to the unease of transitioning to a project-learning teaching style. "I had a lot of questions coming from the traditional method myself," he notes. "I had to let go of control -- not behavioral control, but control of scope and sequence. I had to trust in the process."

He's also seen firsthand the benefits of training action-oriented, critical-thinking students. When his school district experienced a $4 million deficit last year, it meant that nine of the school's thirteen teachers received pink slips. When word got out at the school, the Leonardo Da Vinci students sprang into action.

More than 200 students used the writing and oral-presentation skills they'd developed in class to make impassioned speeches at a school board meeting. The very next day, they used their collaborative teamwork skills to organize themselves into committees to tackle fundraising, political lobbying at the state capital, and community outreach. In the end, with the help of the students, the district raised $2 million from the community, and none of their teachers were laid off.

"They'd internalized all that we'd taught them," Best says. "They thought, 'Here's a problem, here are the obstacles in our way, and here's what we're going to do.' They're very empowered, and that's what you get from PBL."